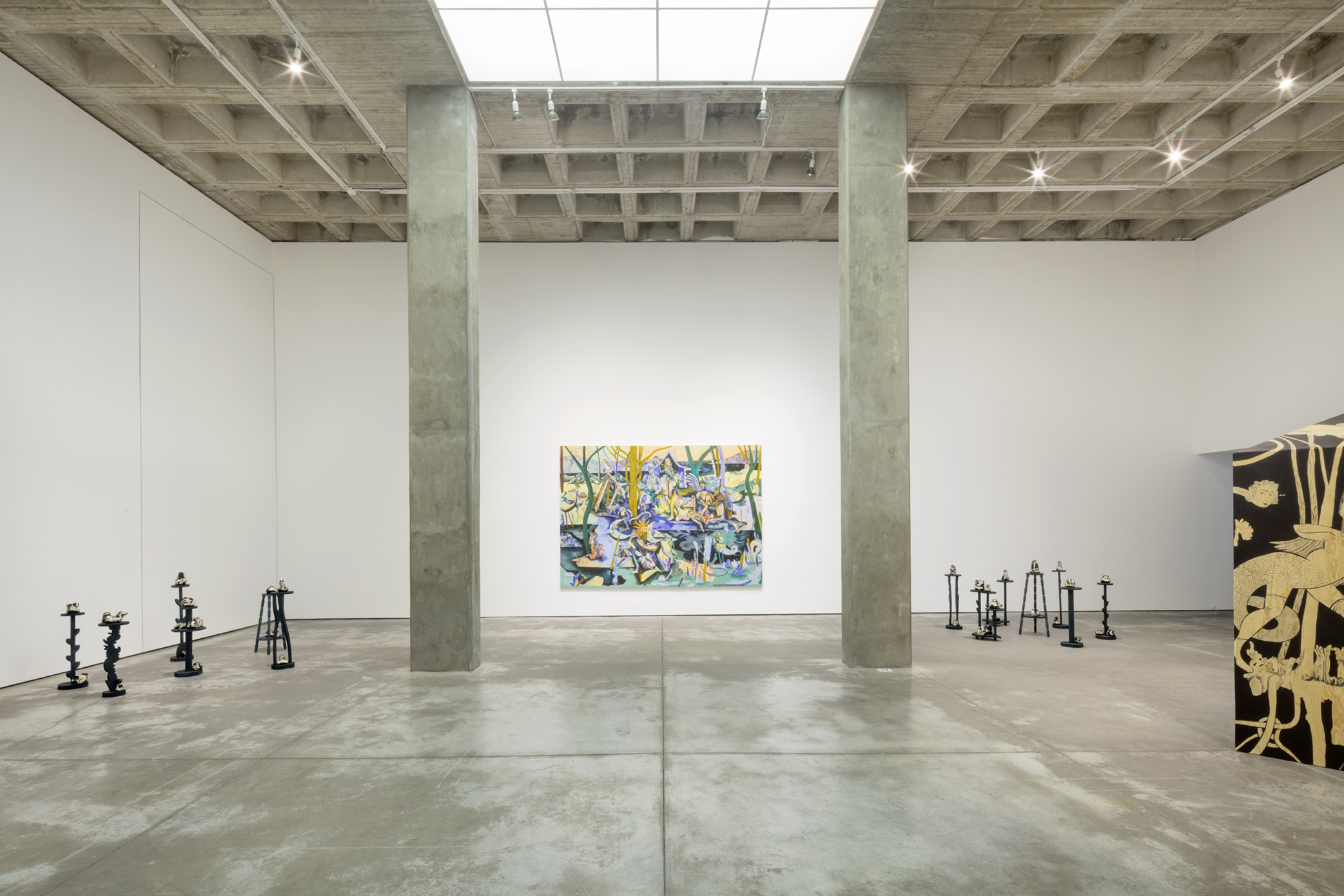 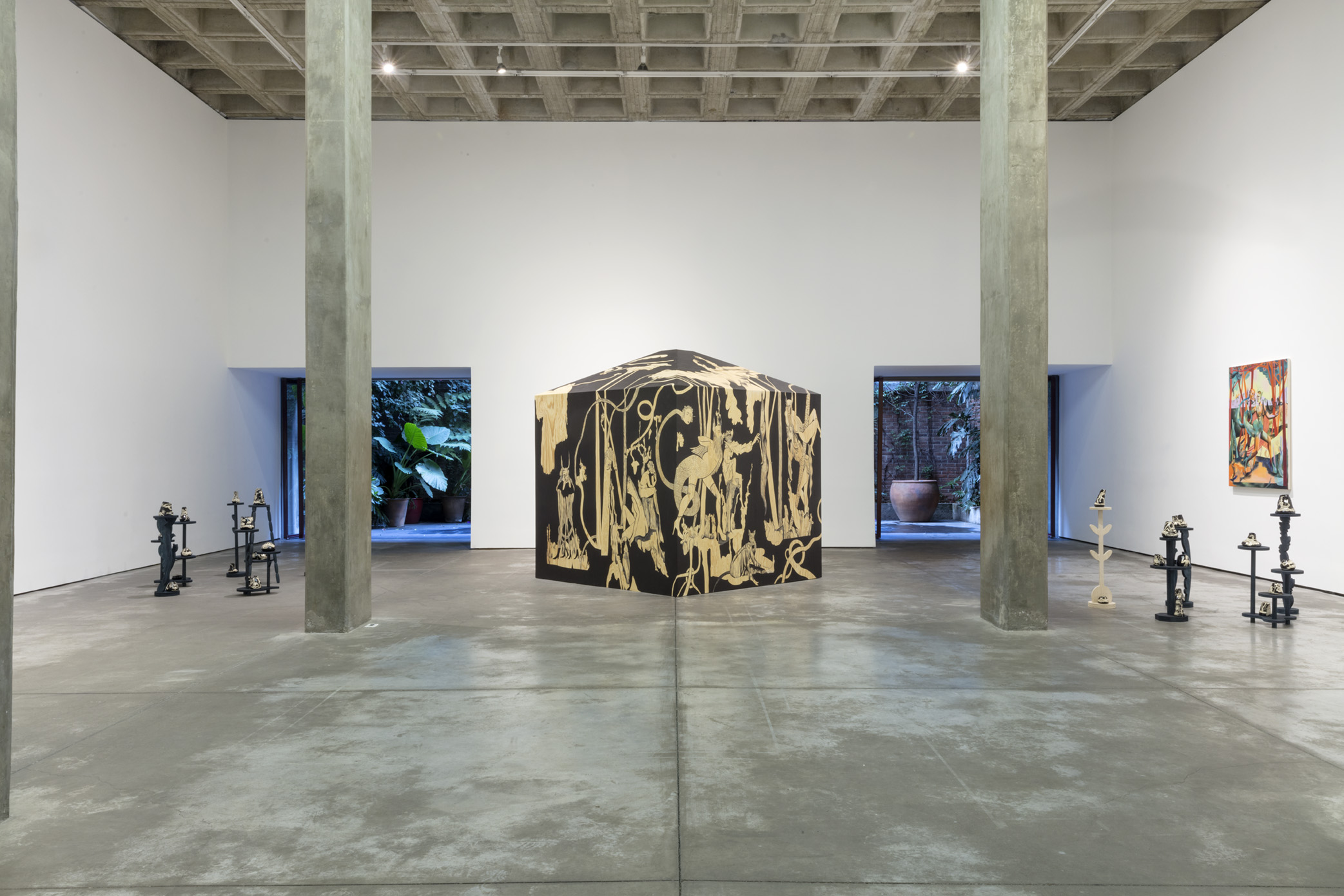 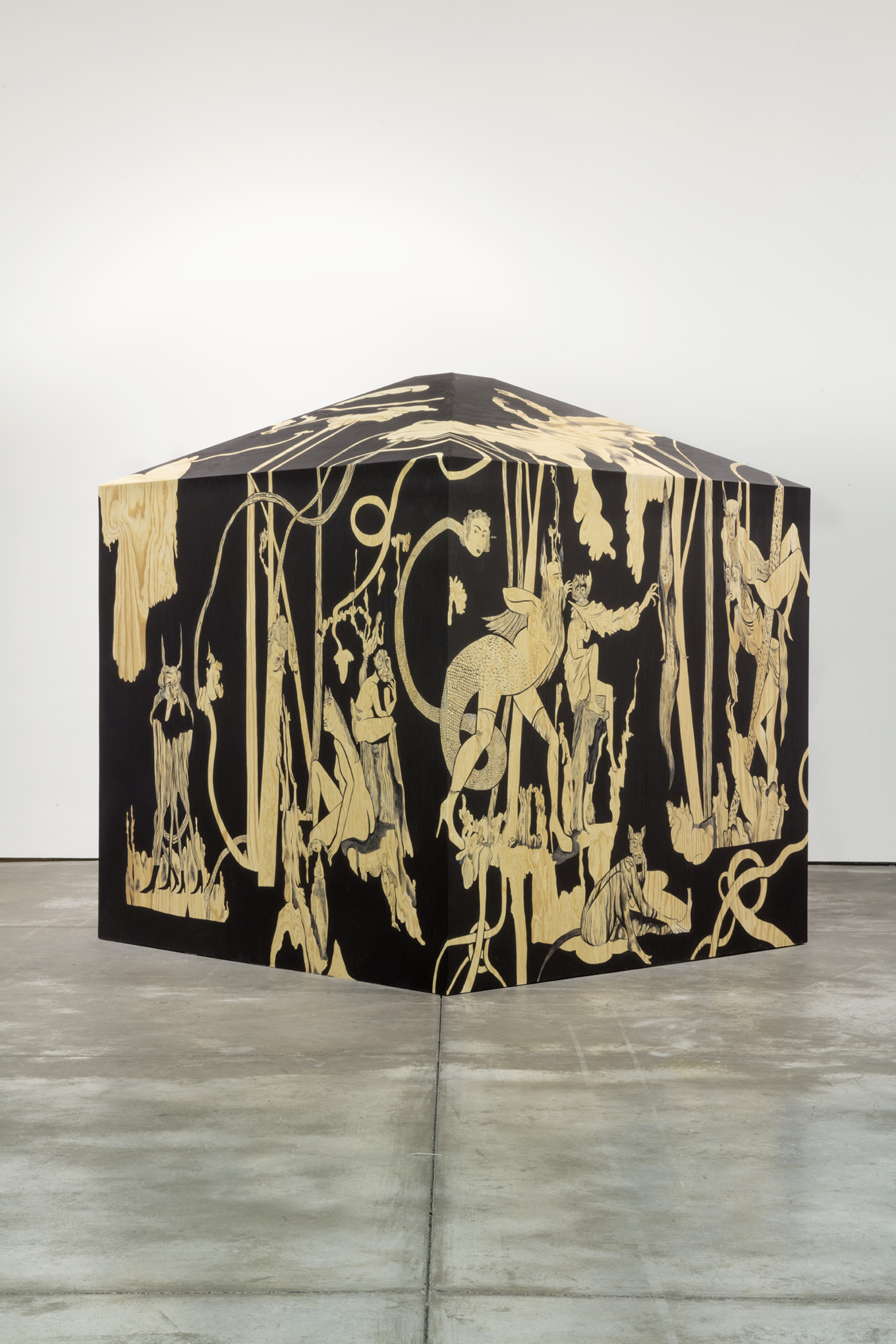 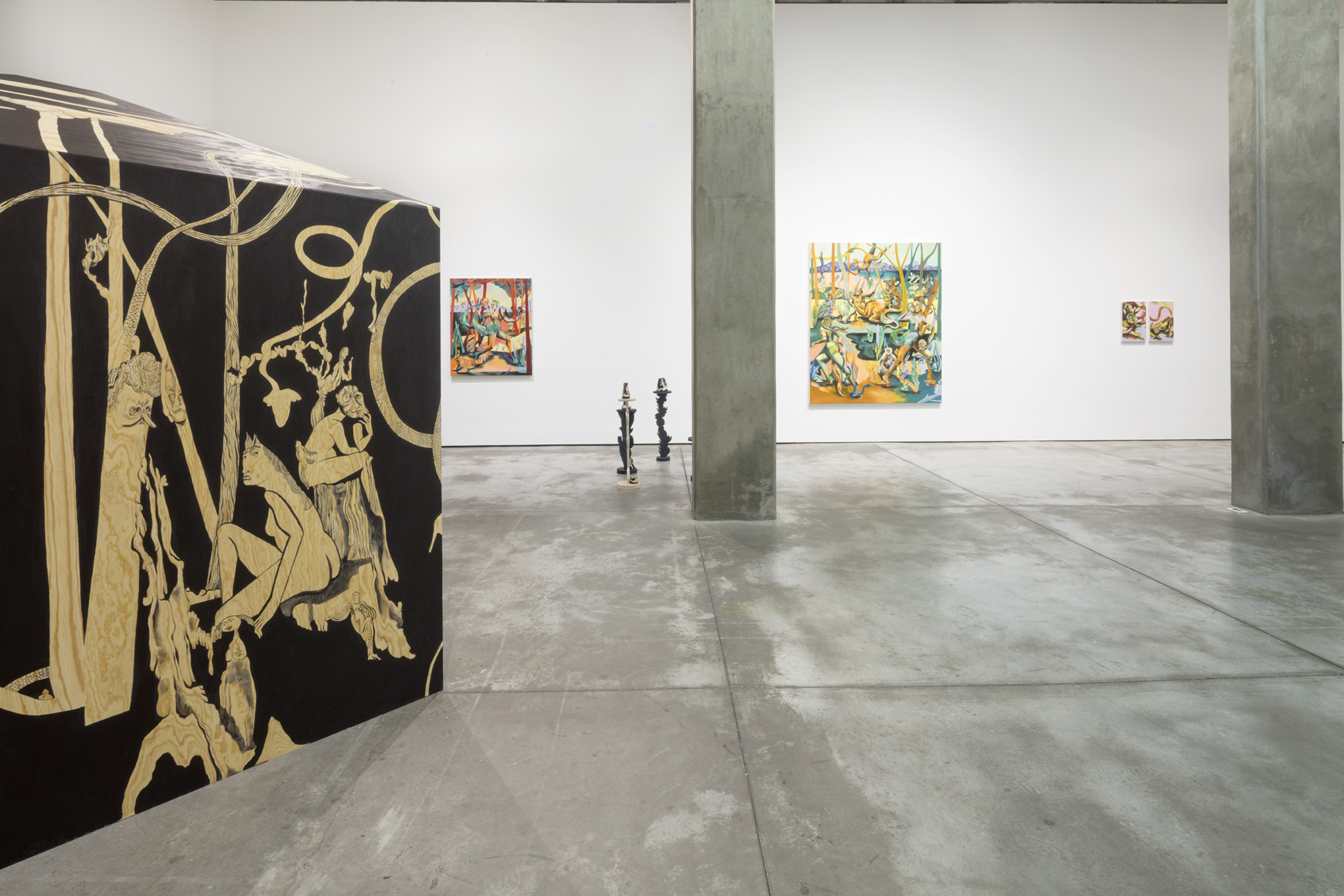 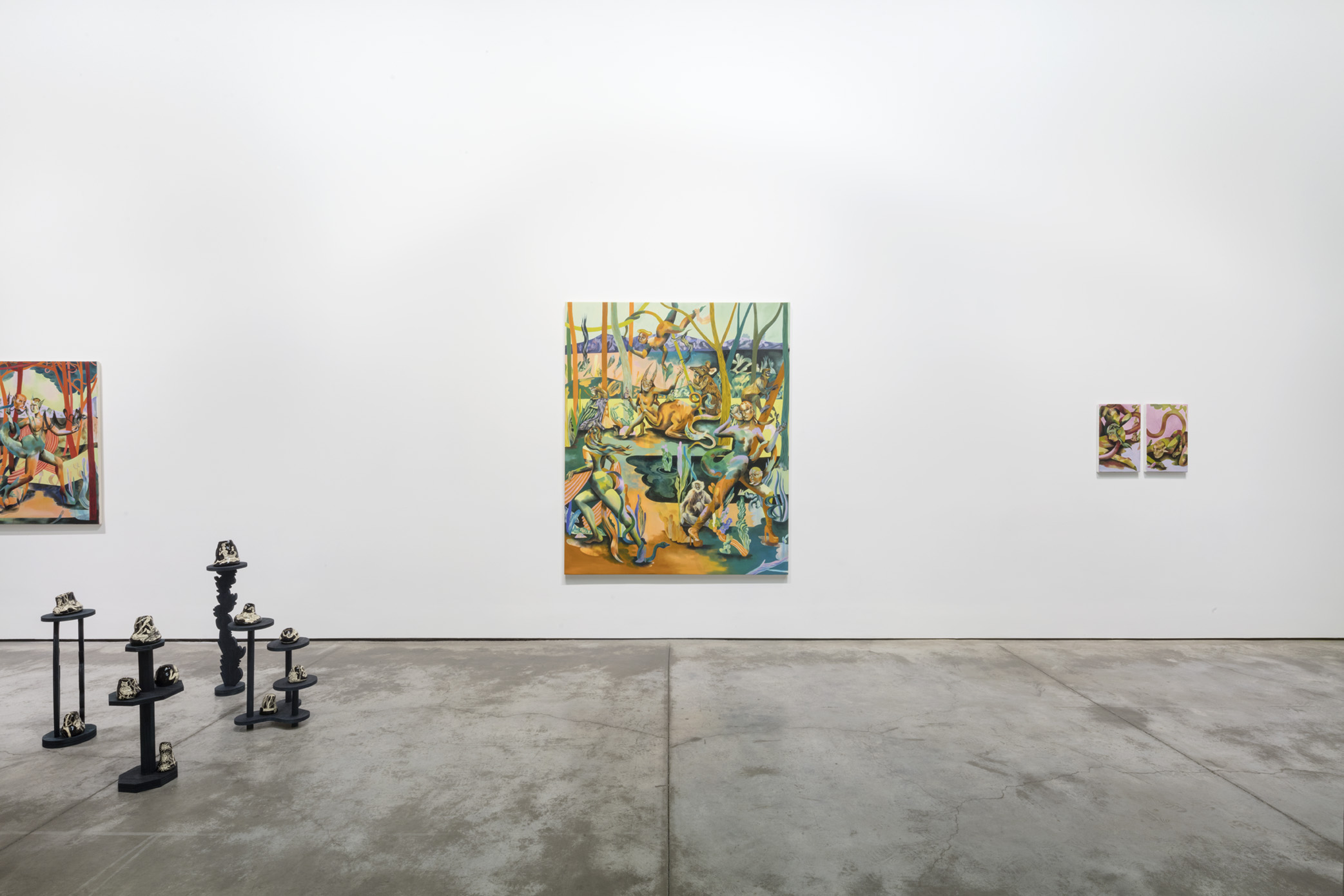 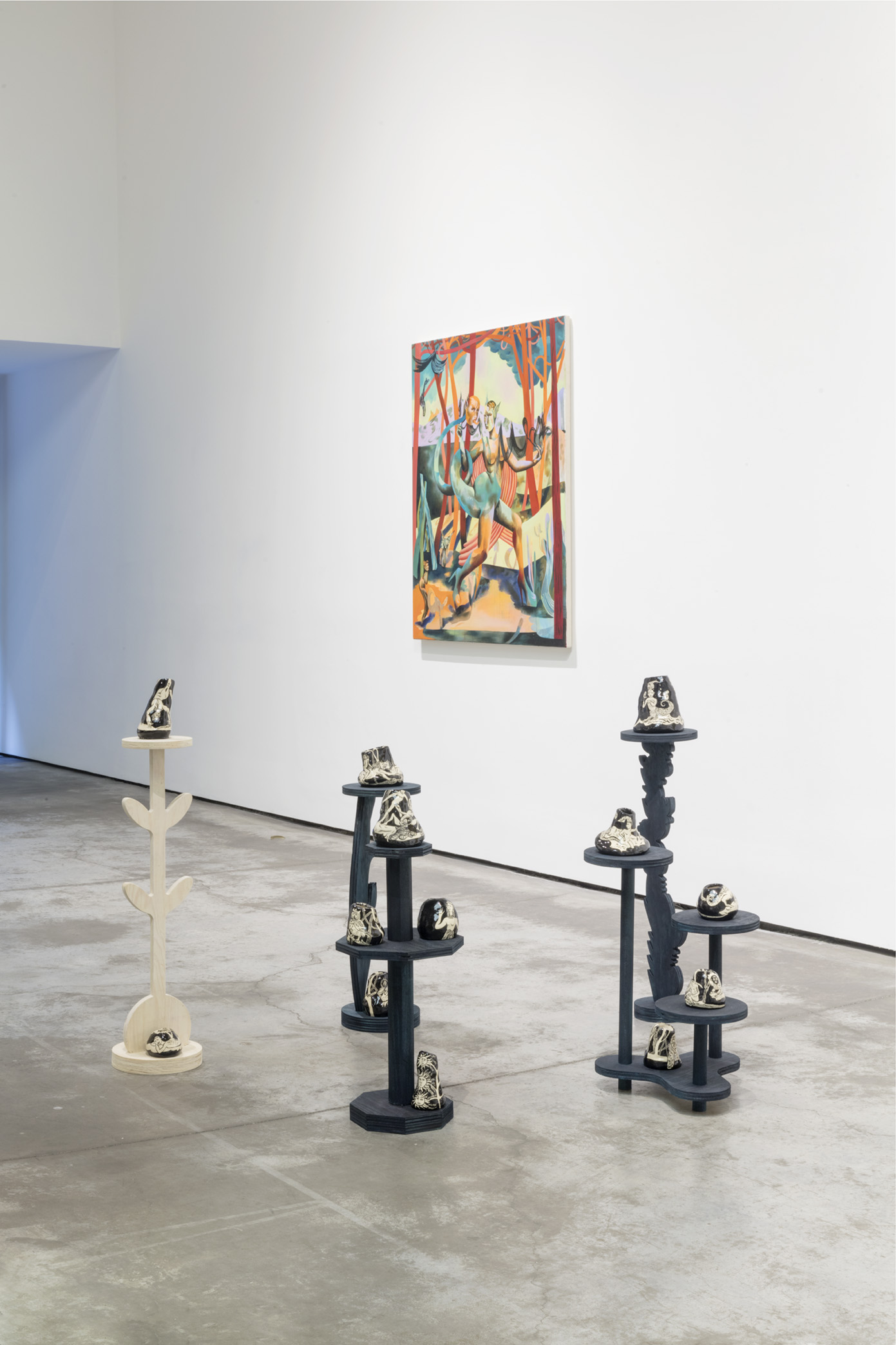 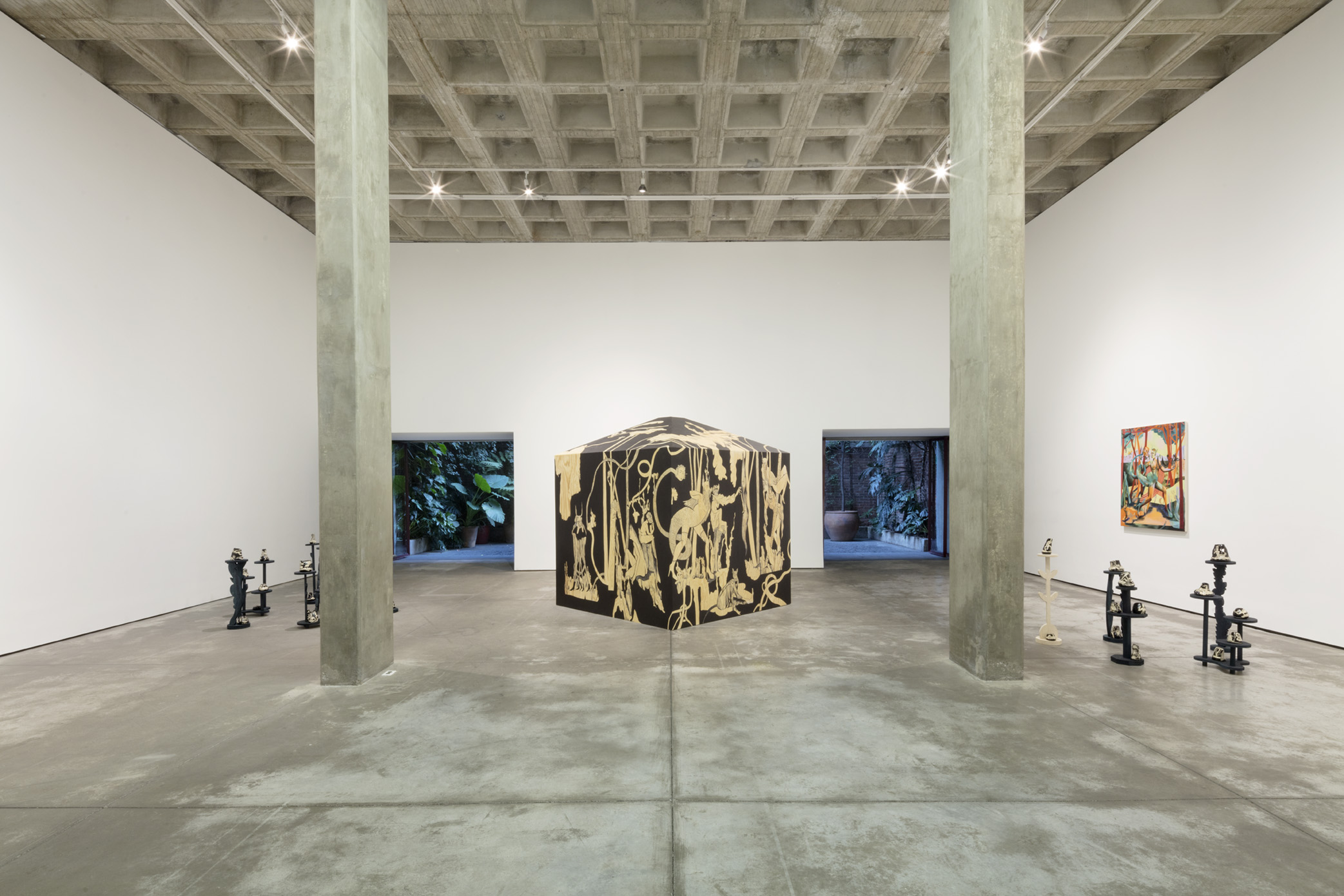 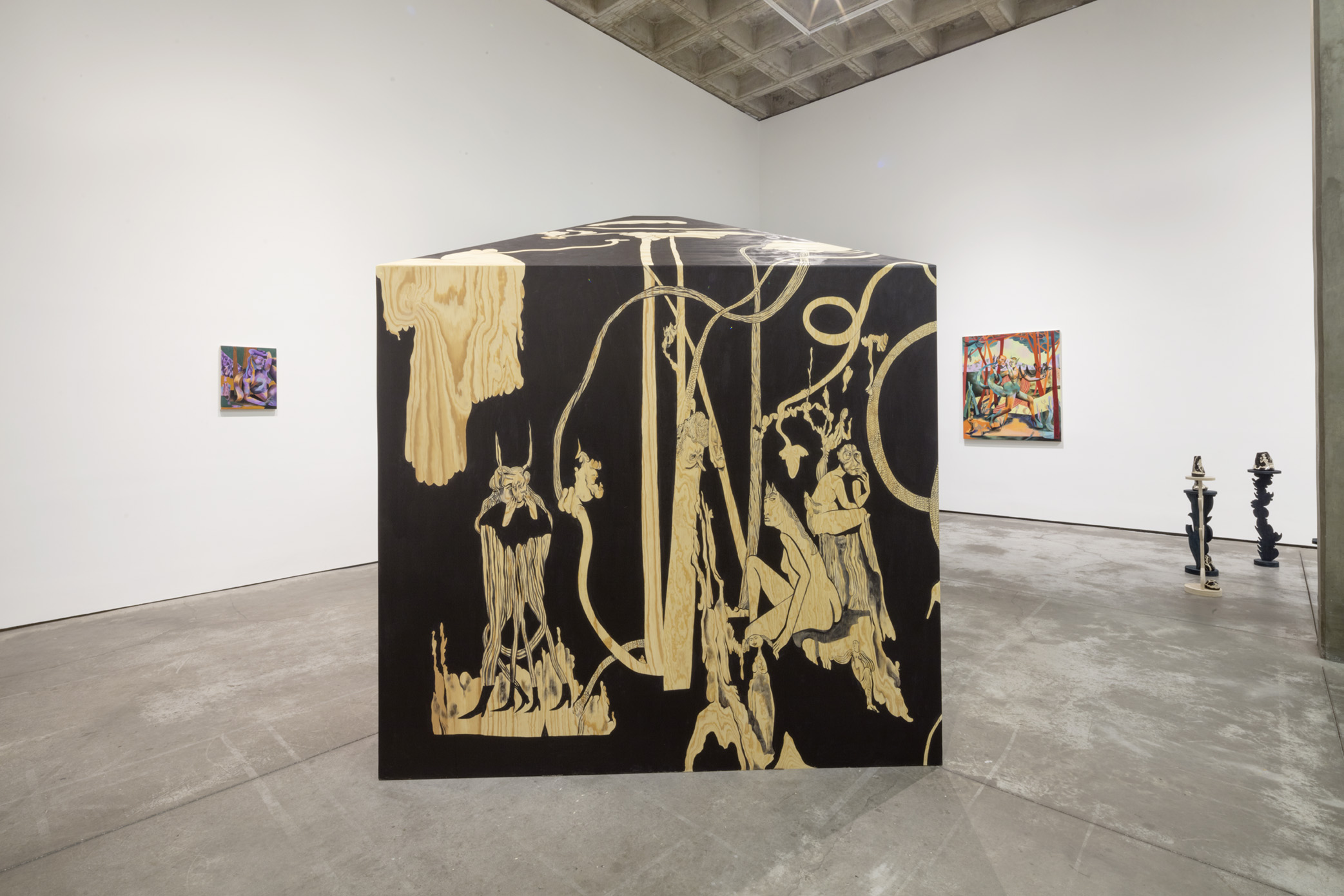 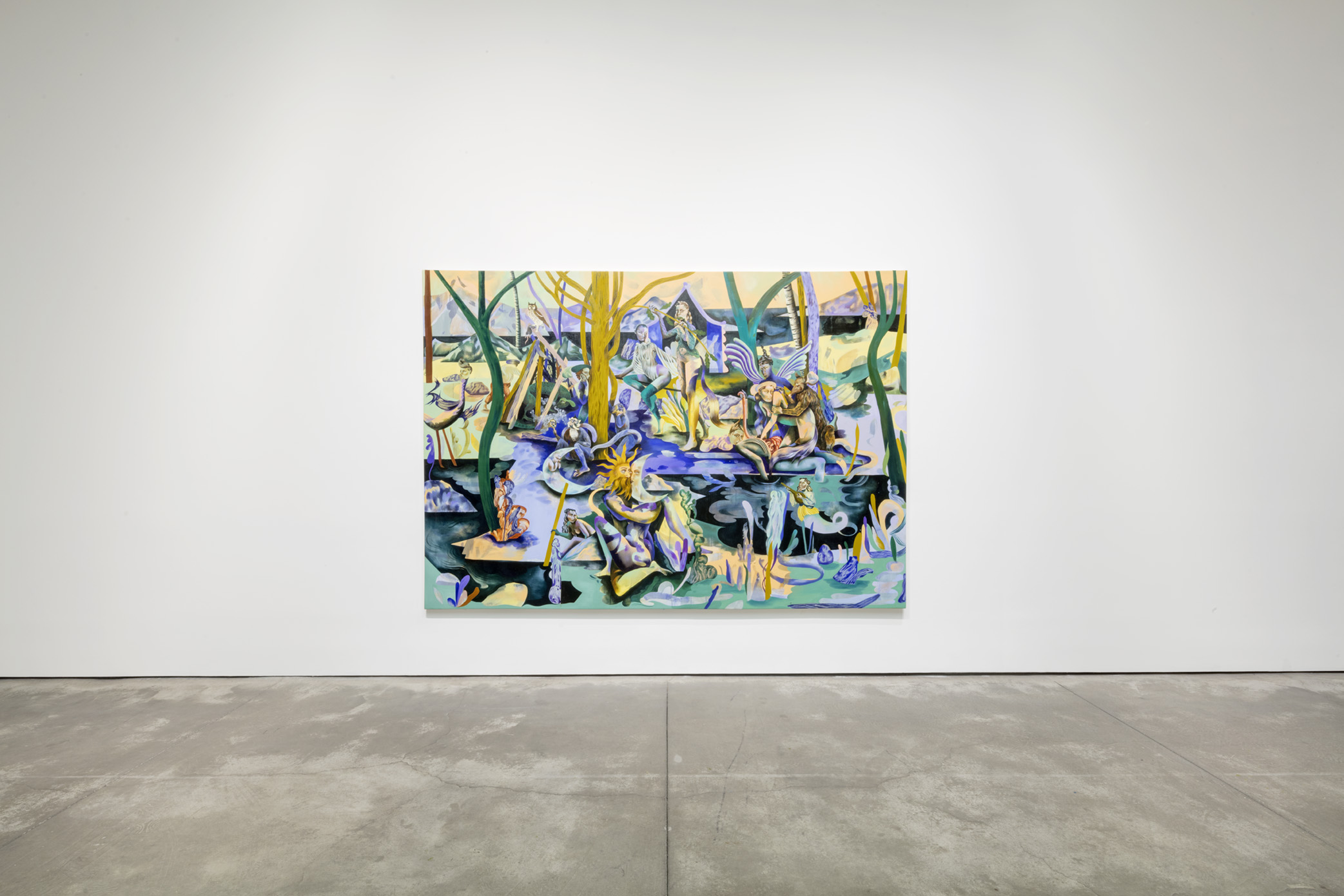 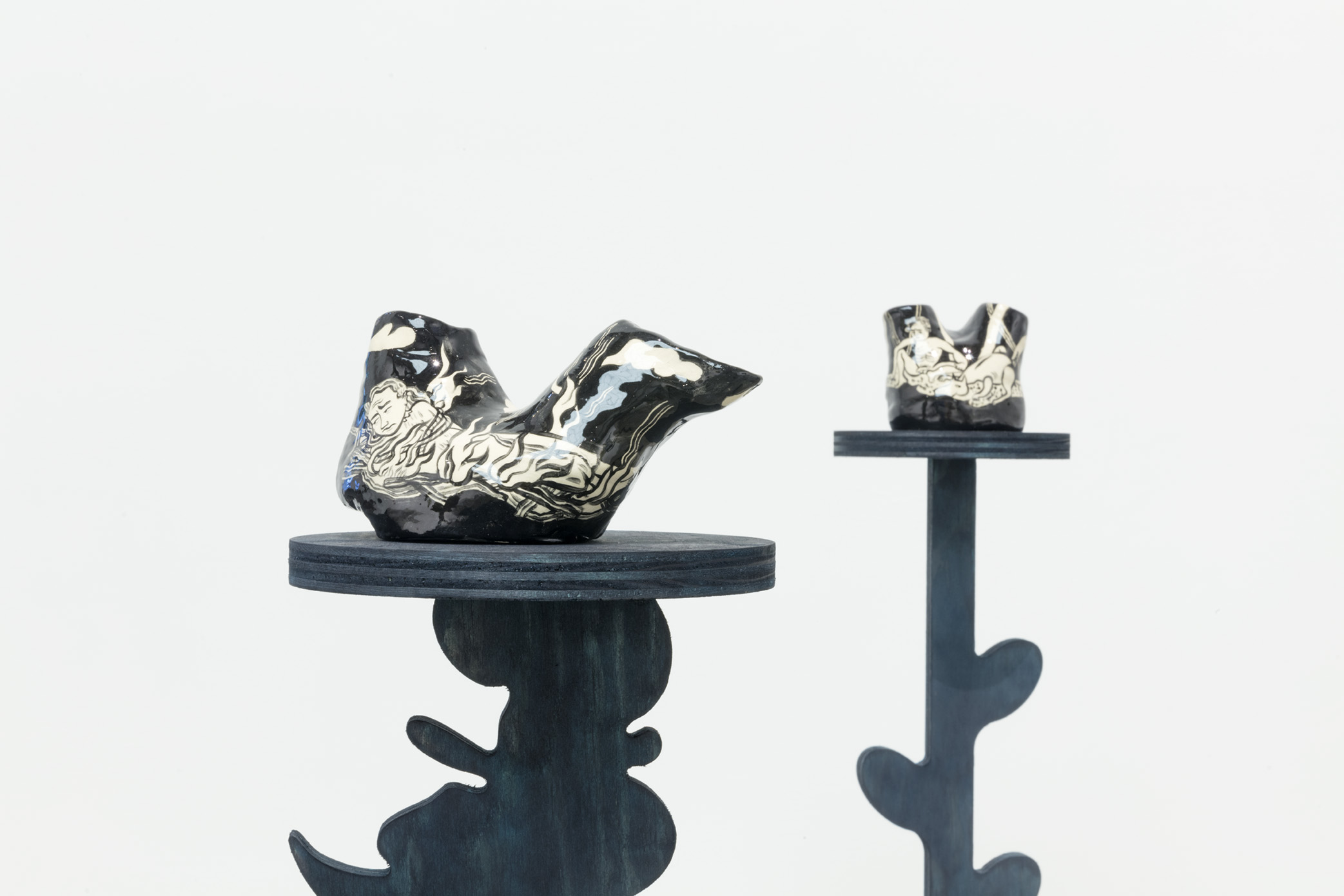 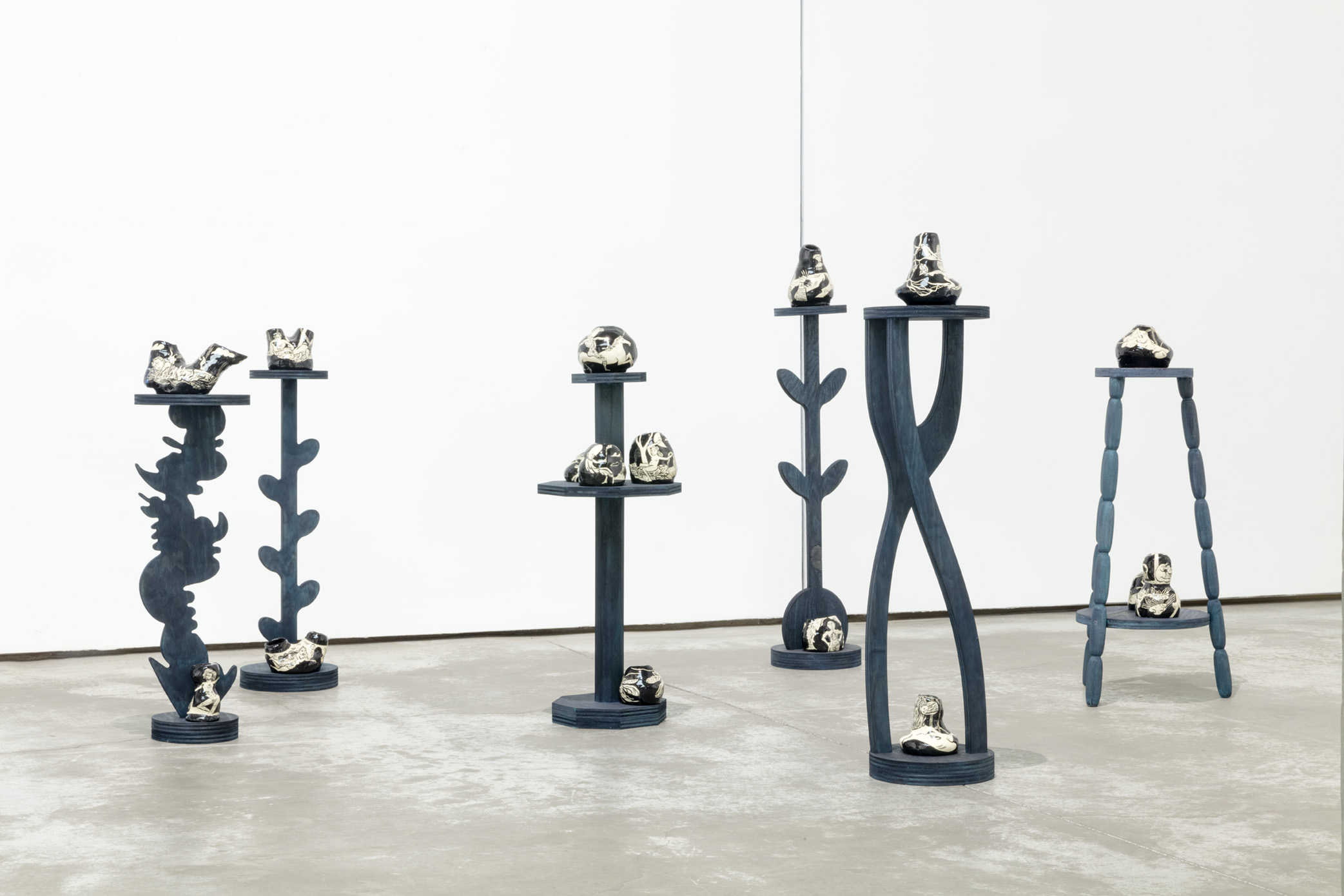 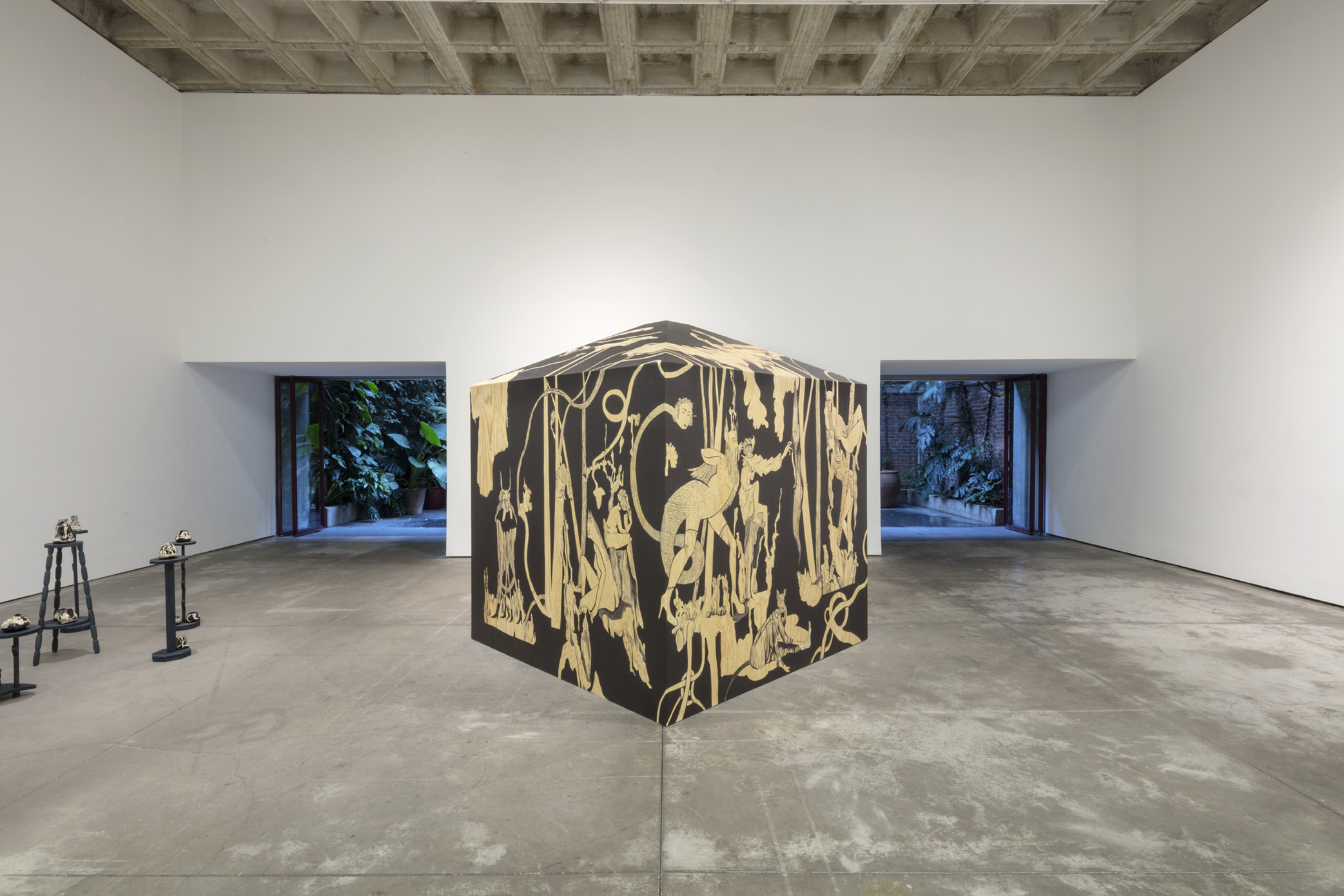 In her works, Makinson creates imaginary scenes that take inspiration from classical mythology and science fiction. The chimerical forest stands as a whimsical backdrop for a rich narrative composed of mythological characters – anthropomorphic and vampiric women whose figures confuse our reality’s distinct divisions between human and animal, desire and fear – becoming autonomous and unknowable. Drawing inspiration from the 17th Century travel fiction The Blazing World by Margaret Cavendish; Tender Trick is an adventure, a romance and fanciful autobiography with an unreliable narrator. A courtly utopia within which, unlike The Blazing World, there are no hierarchies. References to speculative fiction and the occult reveal the world as story and the nature of reality as narrative.

Feathered hats, gloves, heeled shoes, tails and wings are all elements of power play, ways in which the figures can take up space. In saga or myth, the way villains are dressed is very particular; here gloves melt into flesh, dandiacal hats reference highwaymen and boots point and stamp. Historically costume has always been a means of subversion, festival and carnival a means to disrupt the rules and values of society. The intricately coiffured hair and high heeled boots suggest these figures are not wholly wild, flirting with the boundaries of the forest on the brink of ecological disaster. The very nature of the paintings reveals the reciprocal nature of space. The swamp-like water, sparse plants and hybrid creatures are all made up of the same substance, all drawn from the chaotic underpainting, which seeps and drips through like rotten flesh or bruised fruit.

These stage-like shady woods are a space for initiation and fantasy, where anything can happen; of tricksters, paths and illogical consequences; The hunted and the hunter; Woodwose, demons and naughty animals. This natural expanse secludes lovers, cultists, murderers and faeries. Its shaded canopies hide sky worshippers from the eyes of Gods and as in science fiction, it allows for the telling of untold stories.

Starting from completely random drawing on the canvas with dry pigment mixed with an acrylic dispersant, Makinson finds within the dense pattern-like surface suggestions of figures – a small animal, or a woman perhaps. From there, the painting grows outward; with each shape, form, colour, or figure placed, the narrative shifts. Narrative and art historical references emerge as the act of painting proceeds and Makinson finds stories, characters and creepy encounters within the layers. Old friends, memories, misunderstandings and mischief present themselves with each stroke of the brush. The artist doesn’t pay much mind to the symbolism or the consequences of the imagery, but rather trusts to an occult knowledge that the painting and the surface hold the answers. The chaos of the underpainting and the stillness of the faces and figures creates a frantic energy that pulls you around the painting.

Thank you to Fabian Lang for his support to make this exhibition possible.