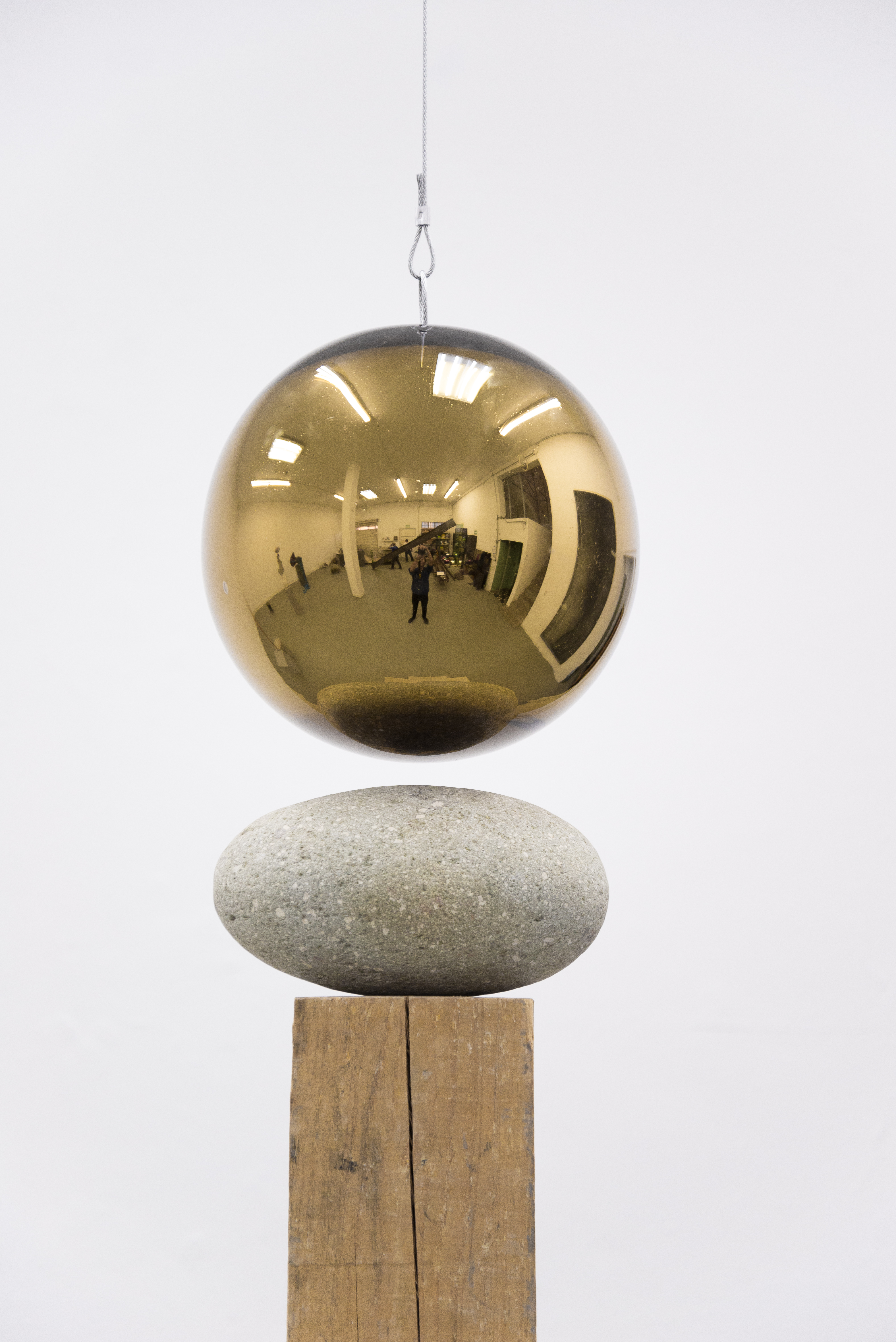 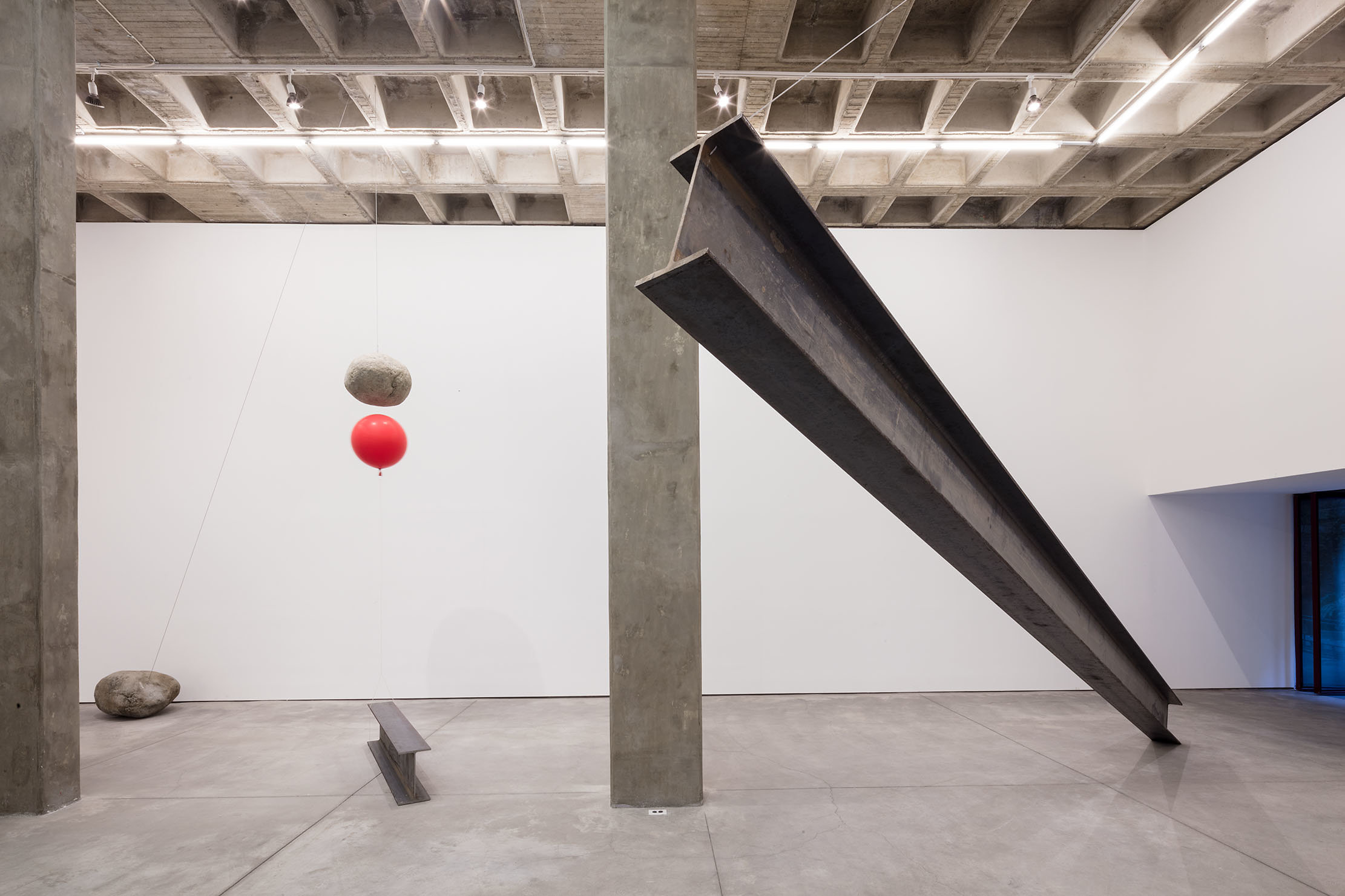 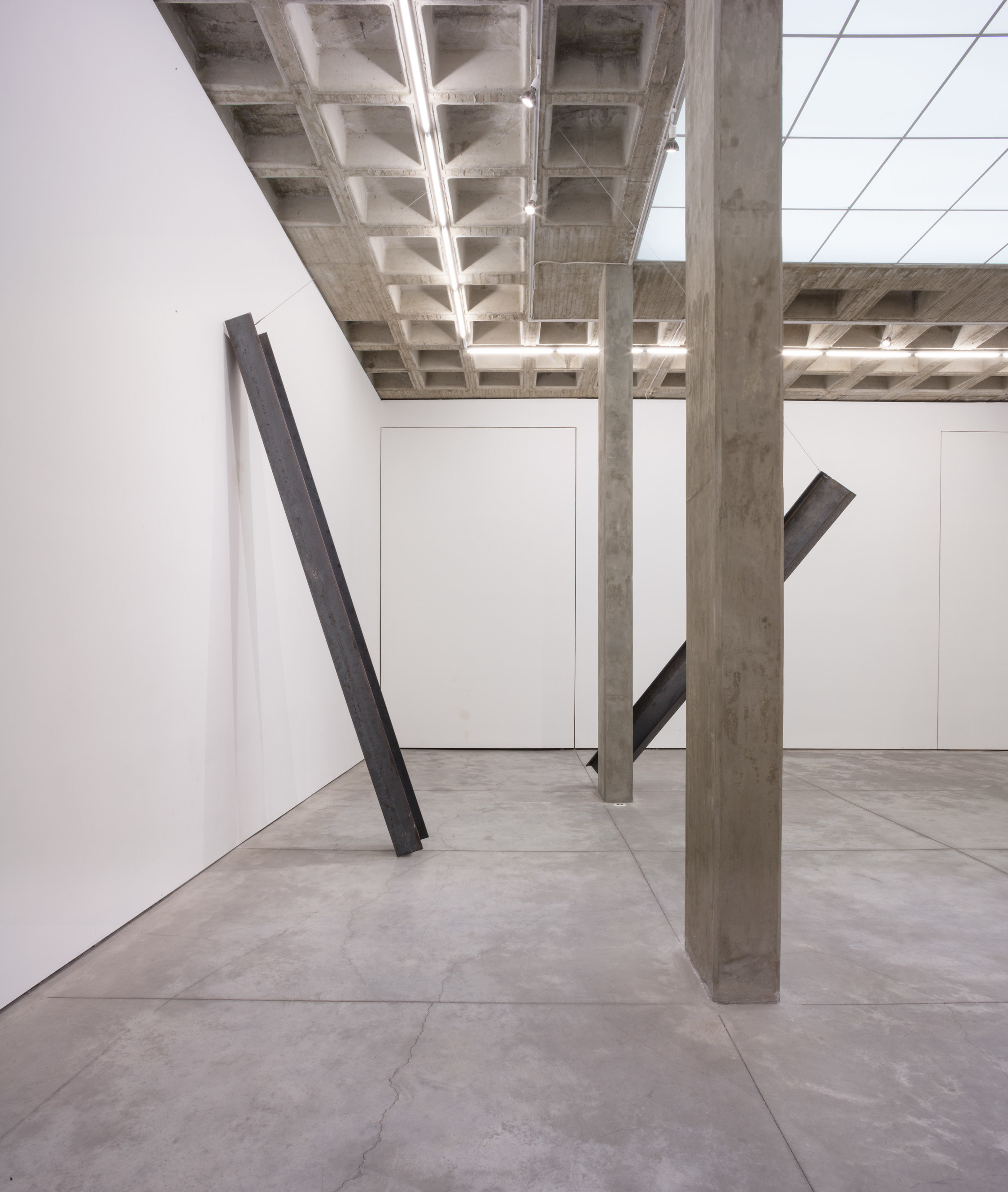 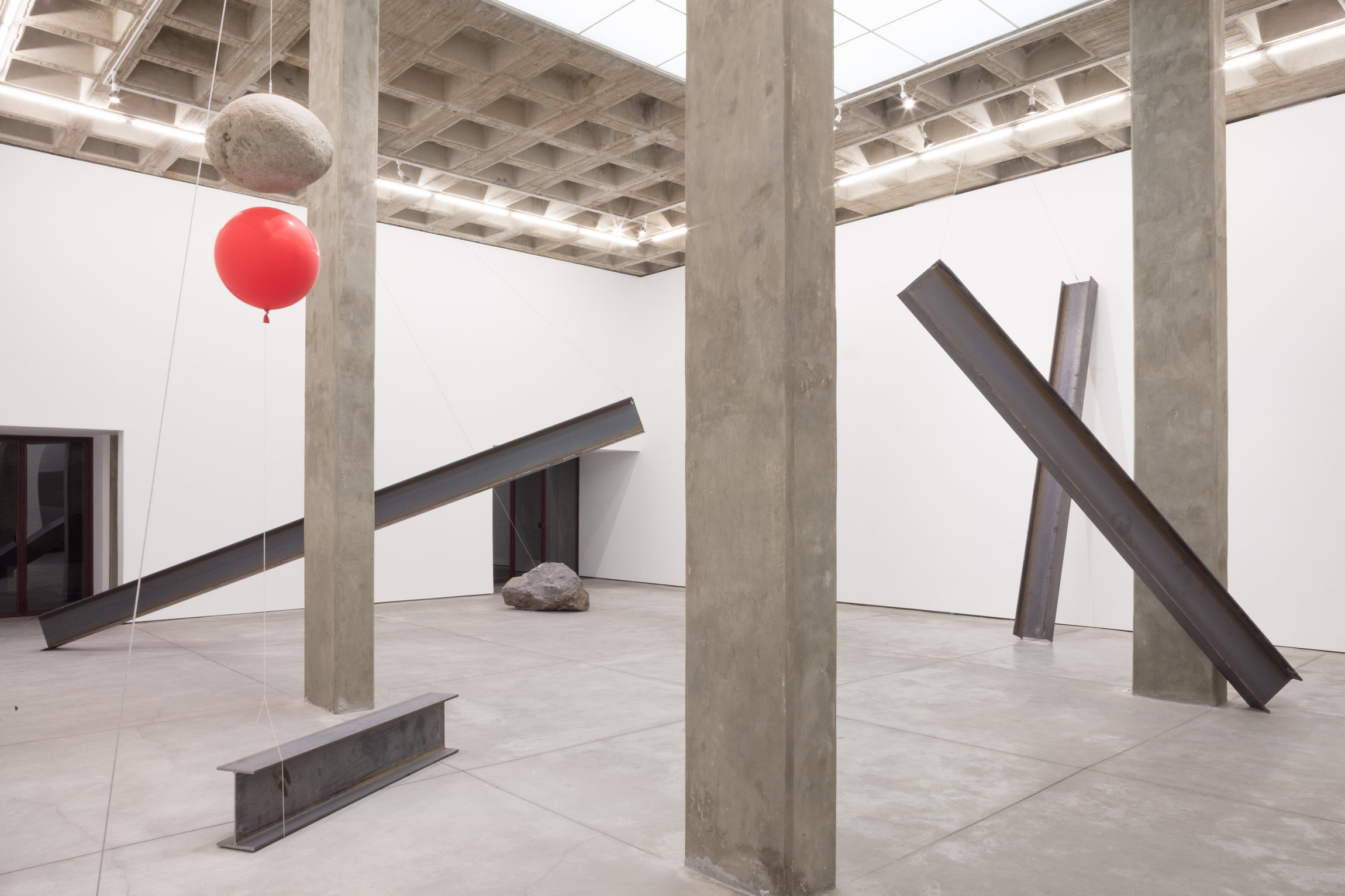 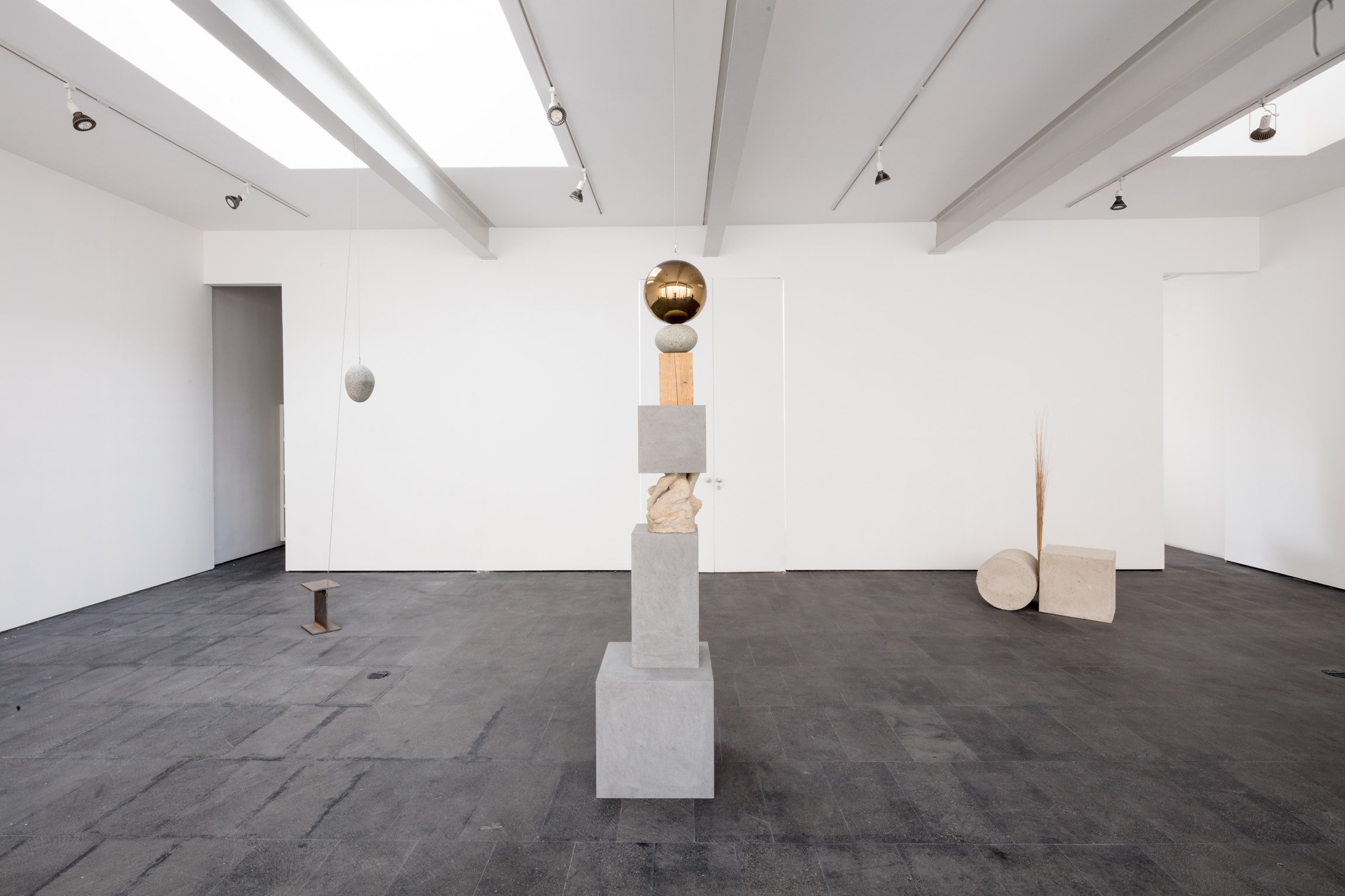 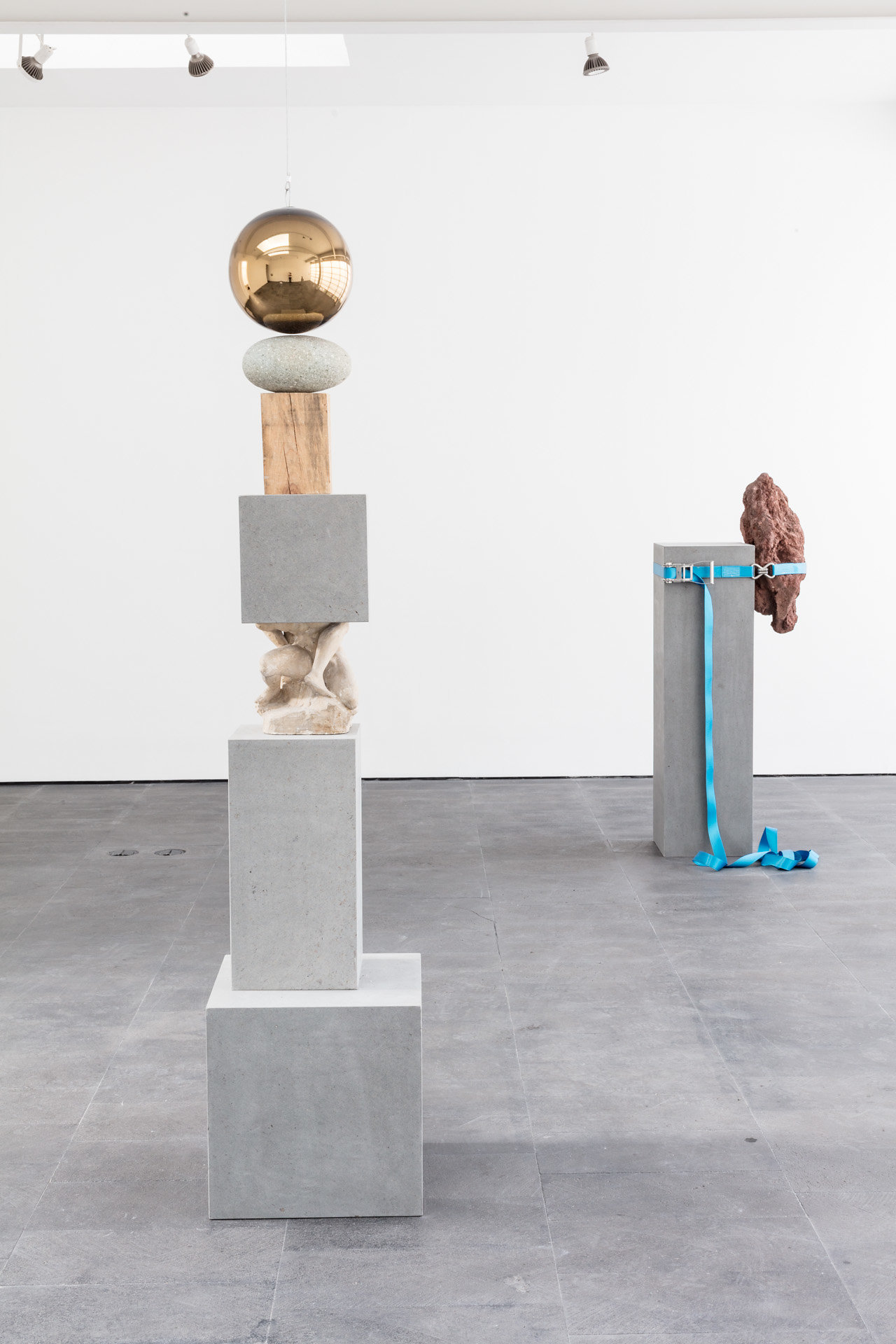 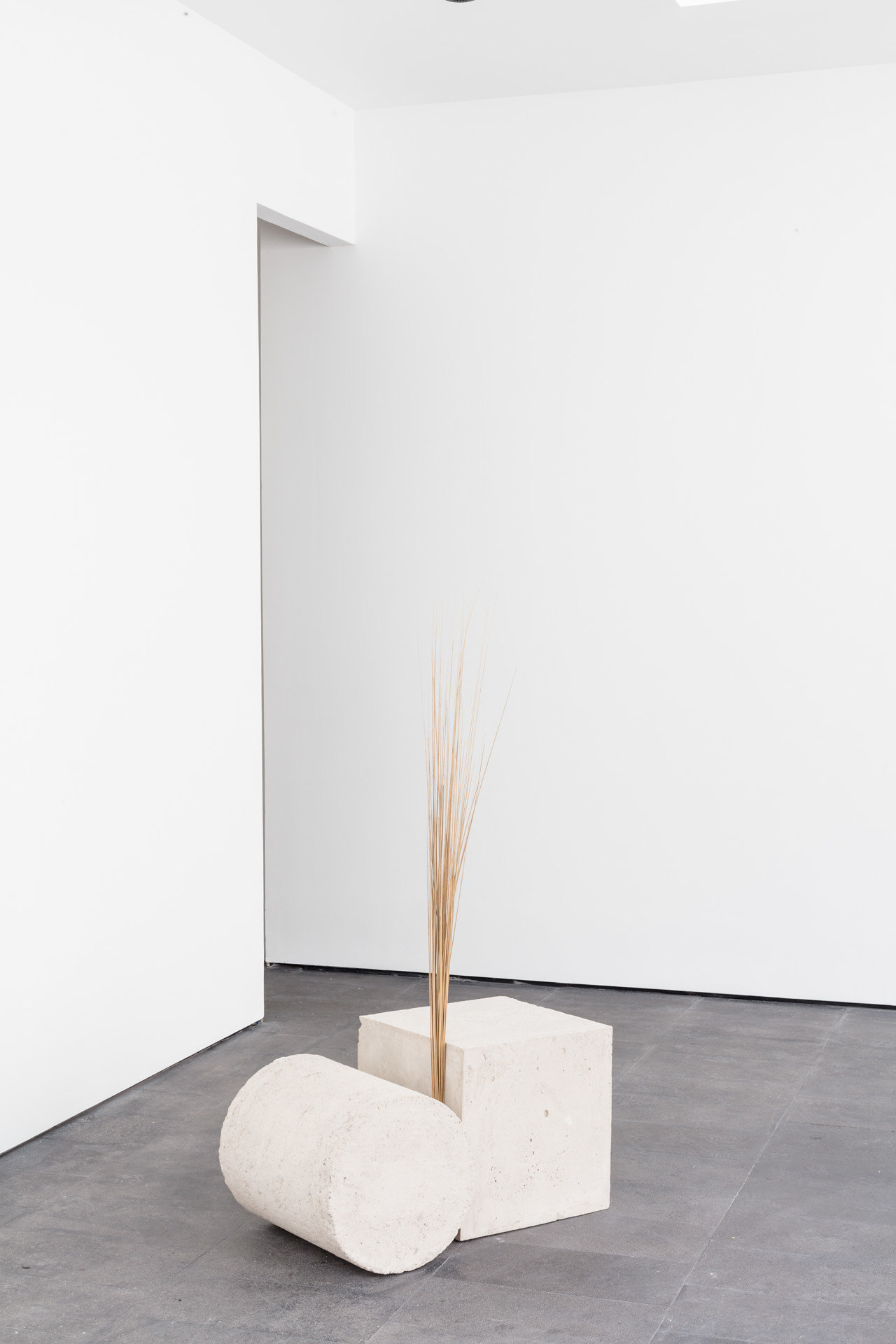 Mecánica de lo inestable presents two recent groups of sculptural works by Jose Dávila. The title of the exhibition works as a haiku, demonstrating the conflictive relationship between juxtaposed systems. Dávila claims that a moving structure maintains a sense of order in what seems unstable but still belongs to the realm of chaos.

Different to other artistic processes in which the material is changed or manipulated, Dávila’s work does not depend on modifying the material’s original state, but rather on its reorganization. In this way, the artist’s role is more that of a catalyzer, who facilitates the processes between already existent forces. The dialogues Dávila activates depend on a series of variables and objects: the space in which he works, the materials, the textures, the weights, and the way these weights interact with each other, along with the materials that bind them together.

On display in the gallery’s main space, three sculptures consisting of metal beams, rocks and a sphere are balanced by a series of weights, sustained by points of tension. The metal beams form diagonals, which, by the movement of the spectator in the exhibition space, can suddenly present new and often dramatic angles and perspectives. This spatial composition has an even more complex effect: the loss of orientation. In other words, it is uncertain if the sculptures are intentional or random in their placement; they seem to emerge from the floor reaching toward the ceiling and vice versa.

On the gallery’s second floor, Dávila presents another group of sculptures which continue the investigation of his previously used materials. Concrete, crystal, rock and wood are placed in physical tension, leveling each other out, while balancing and confronting one another. Actions, which depend not only on the materials; industrial belts, steel cables and rigging points but also on the space itself.

In the works Mundo paralelo and Panoptico, the artist has included three rather unusual and quite new elements in his oeuvre: branches, a crystal sphere and an apple – sculptural objects that are less neutral than the building materials Dávila normally uses. The objects all have an idiosyncratic and historical meaning and act as a juxtaposition to the normal materials while revealing a clearer vision from the artist.

The apple, in the work Every Finding Has a Consequence, opens up a conversation about Newton’s discovery of universal gravitation. In reference to this, the Italian physicist and theorist Carlo Rovelli claimed that new theories could only emerge through the conflict of two previous and well-functioning ones. One could therefore state that Newton split the work and theories of Galileo and Kepler to form his notion of gravity.

Using this thought as a stepping-stone, but in another kind of investigation, Dávila has presented through his career two different kind of systems from recent art history. On one side, the artist consistently refers to American Minimalism in which materials and shapes are appropriated by artists such as Donald Judd, Richard Serra, Robert Smithson and Dan Flavin. On the other hand, Dávila also refers to Latin-American movements like the Neo-Concretism and modern architecture, but also to recent contemporary artists who have made the “Third World” their prime material.

This permanent conflict in Dávila’s work between historical currents, shape and surrounding, weight and strength, autonomy and appropriation all begin to reveal metaphysical, melancholic and even romantic aspects. The artist’s most recent obsession with balance and his interest in verticality show glimpses of the artist taking steps towards a new direction in his career.

Mecánica de lo inestable presents an opportunity to observe the subtle ways, without forgetting space and materials, in which the artist has positioned himself as a reorganizer of structures and their delicate state of rest/stillness/repose. Unusual, deliberate, and even absurd structures whose elements become more distant and more precise every time, support the idea of other kinds of scales, even wider systems, which already have or are containing us.