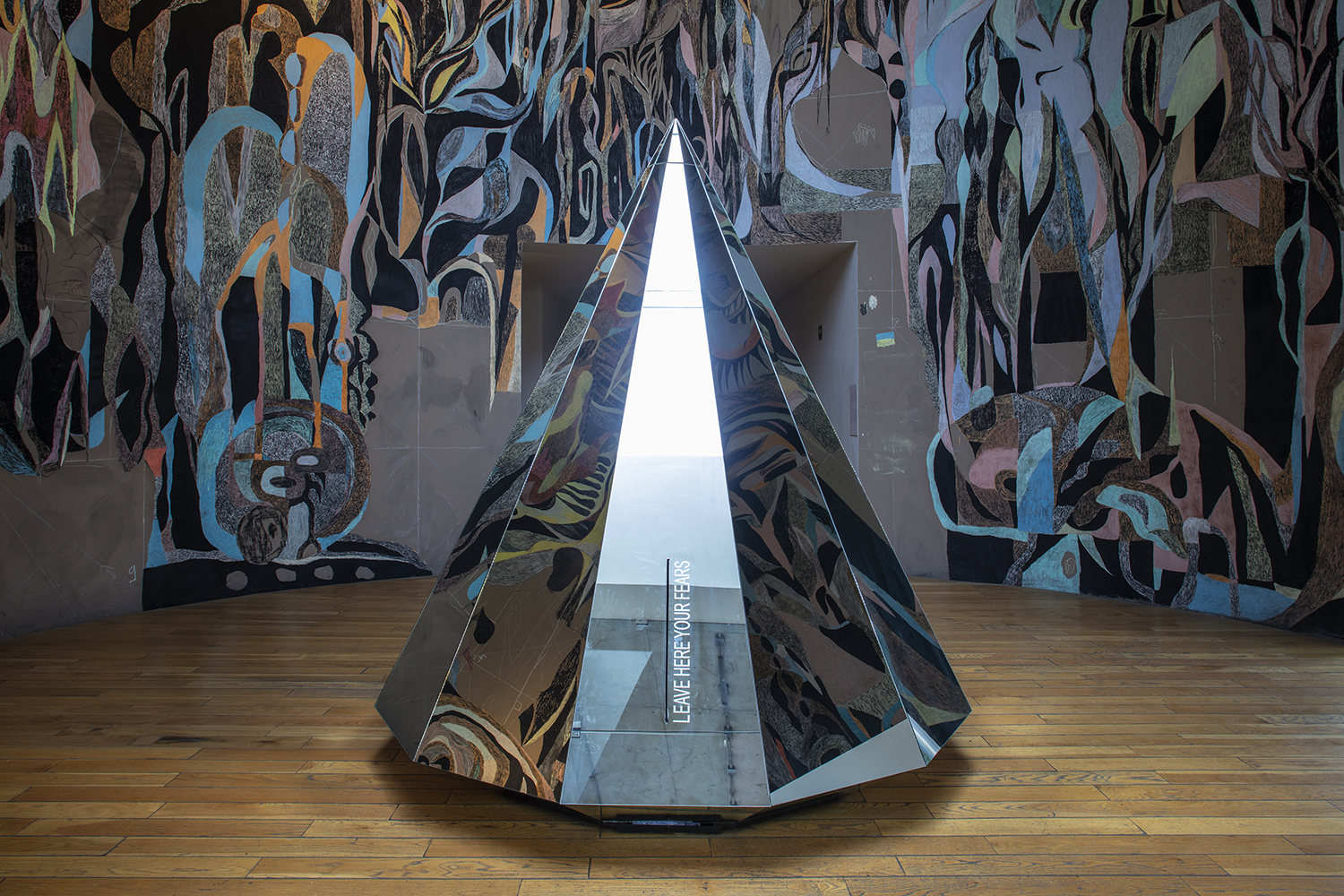 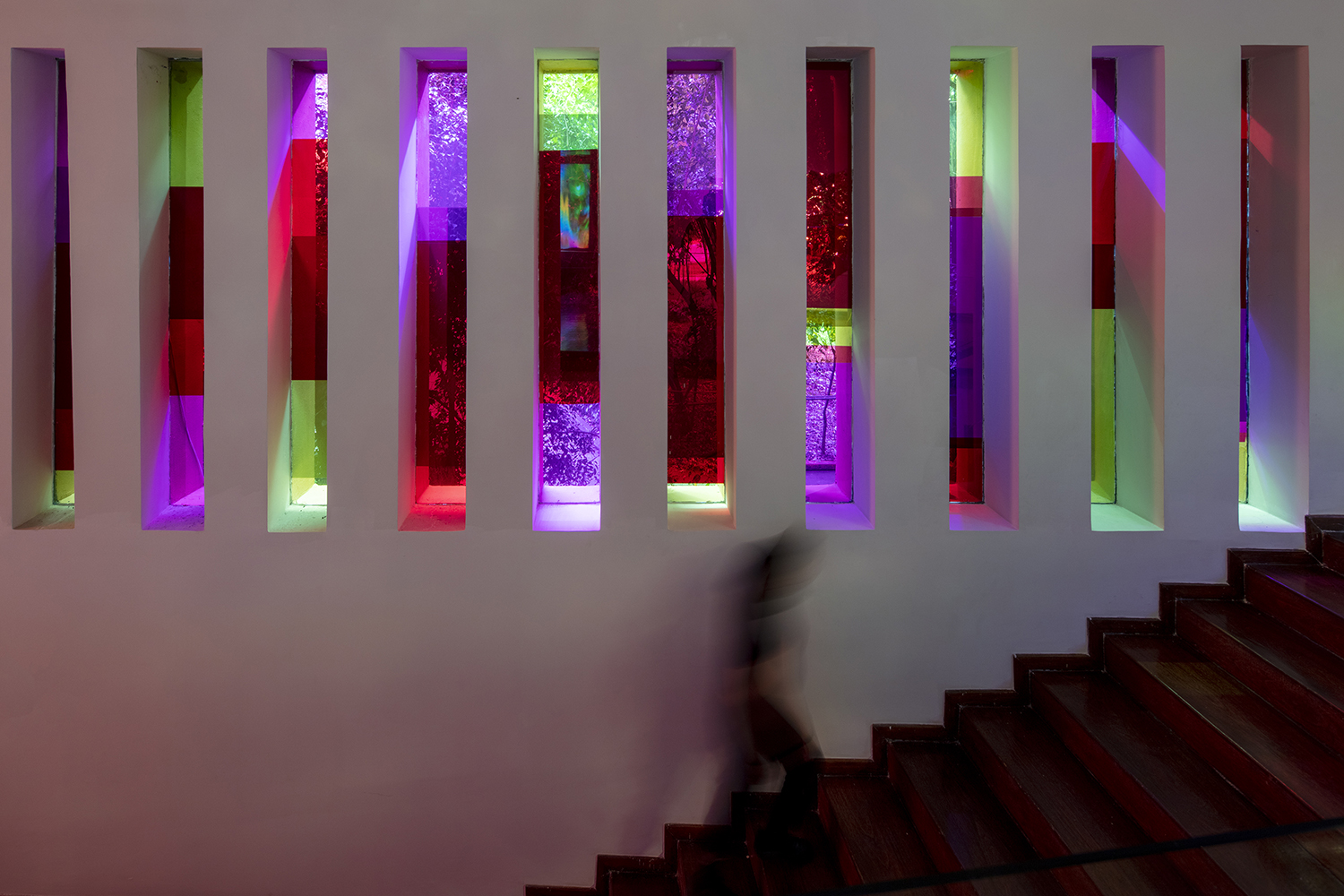 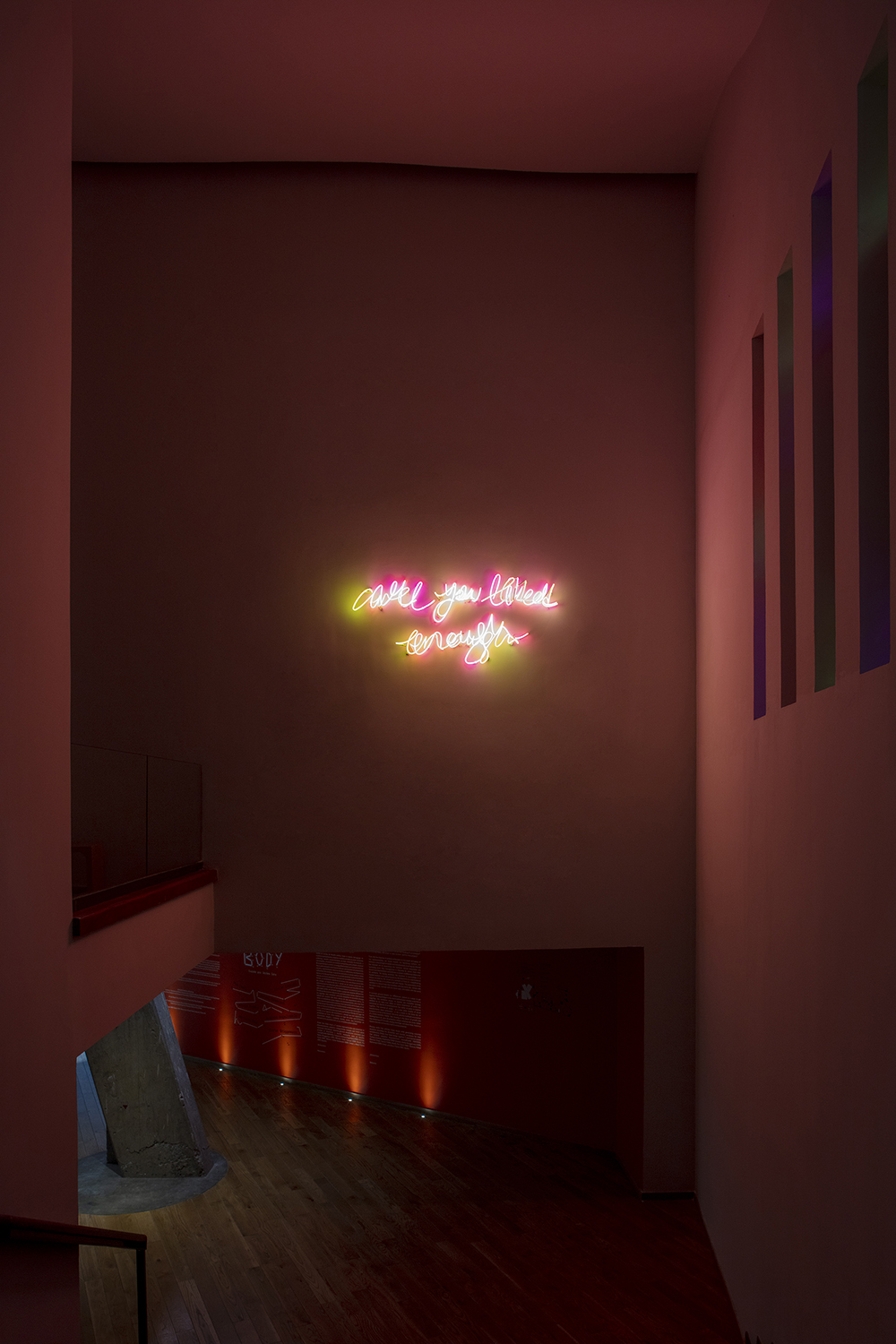 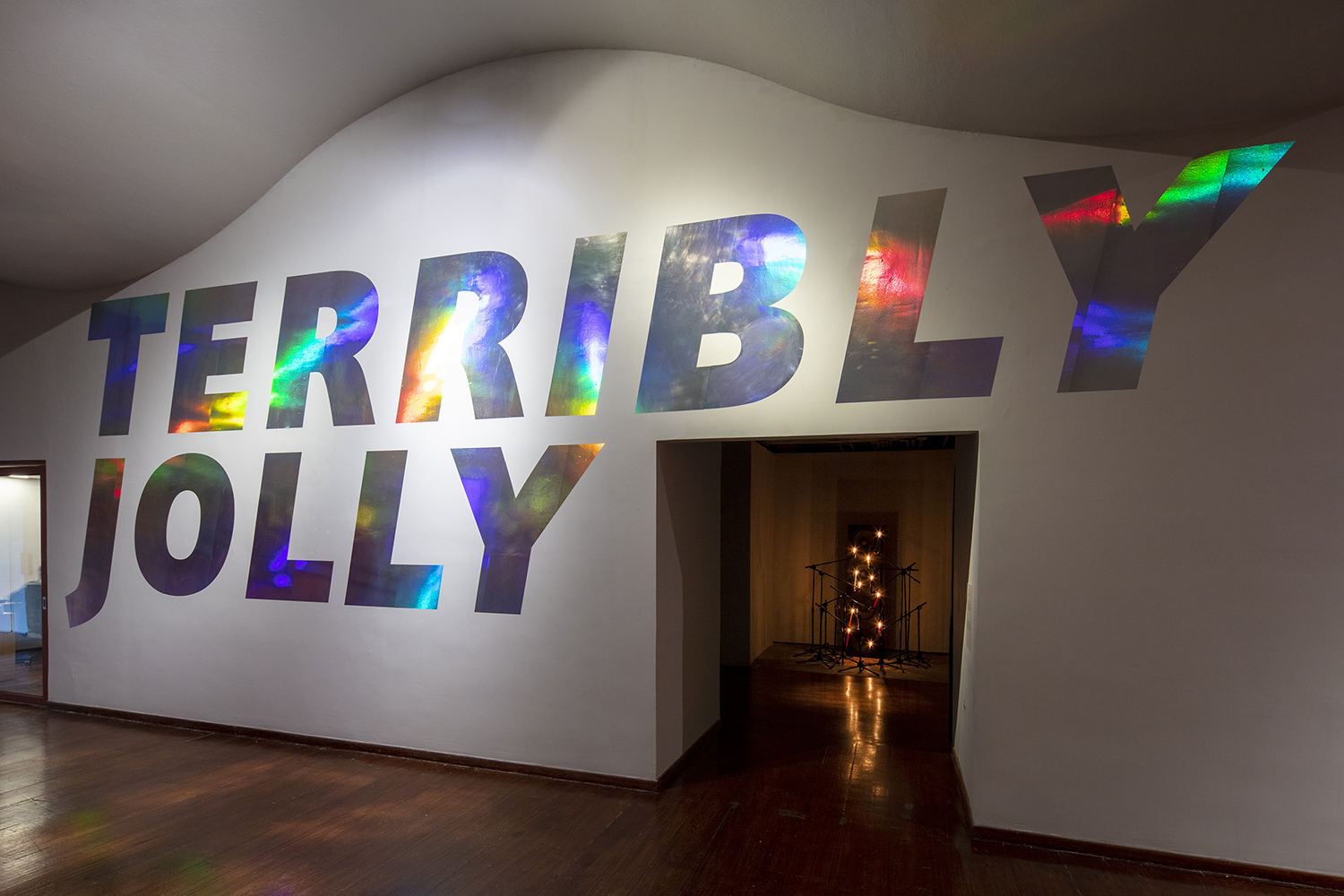 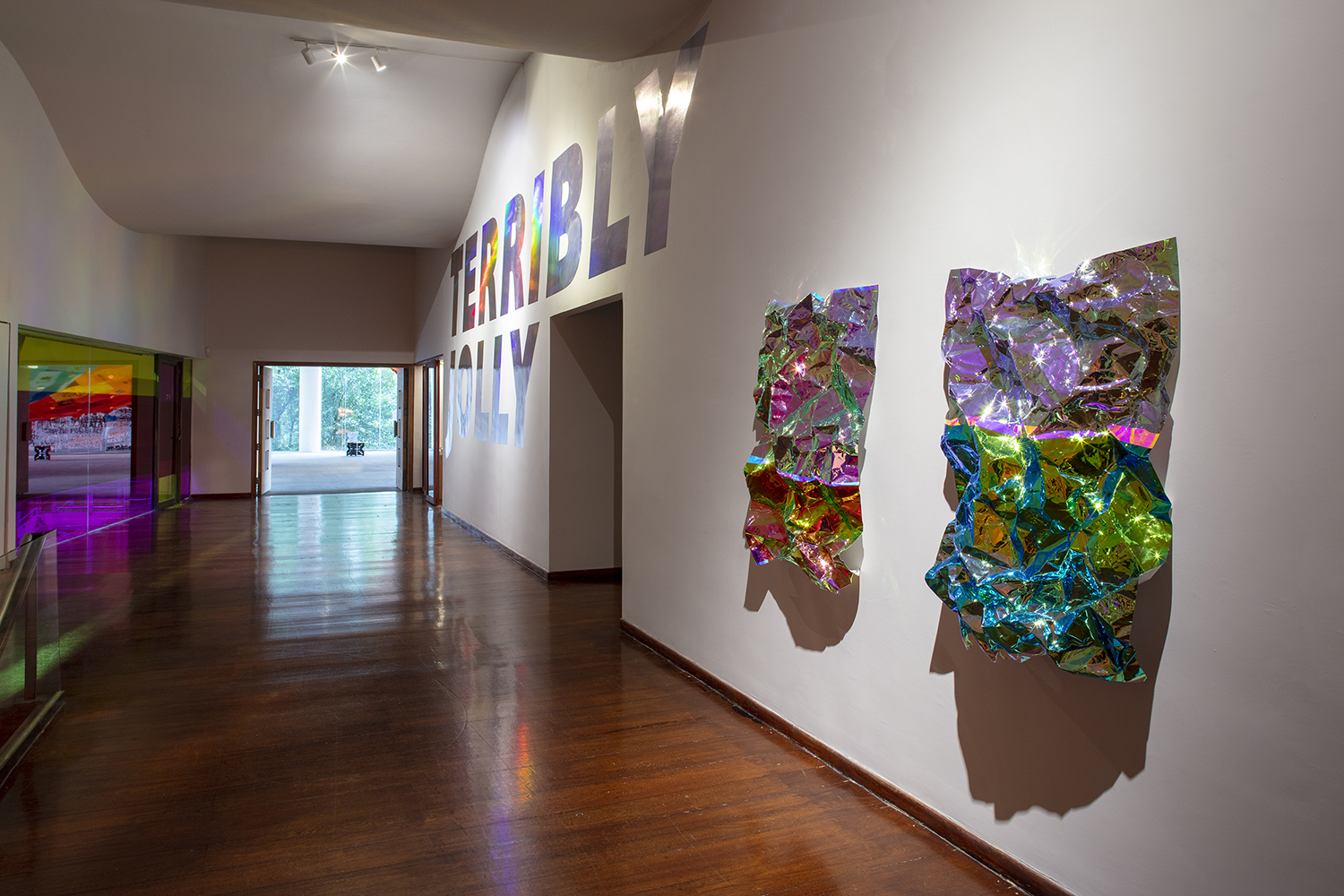 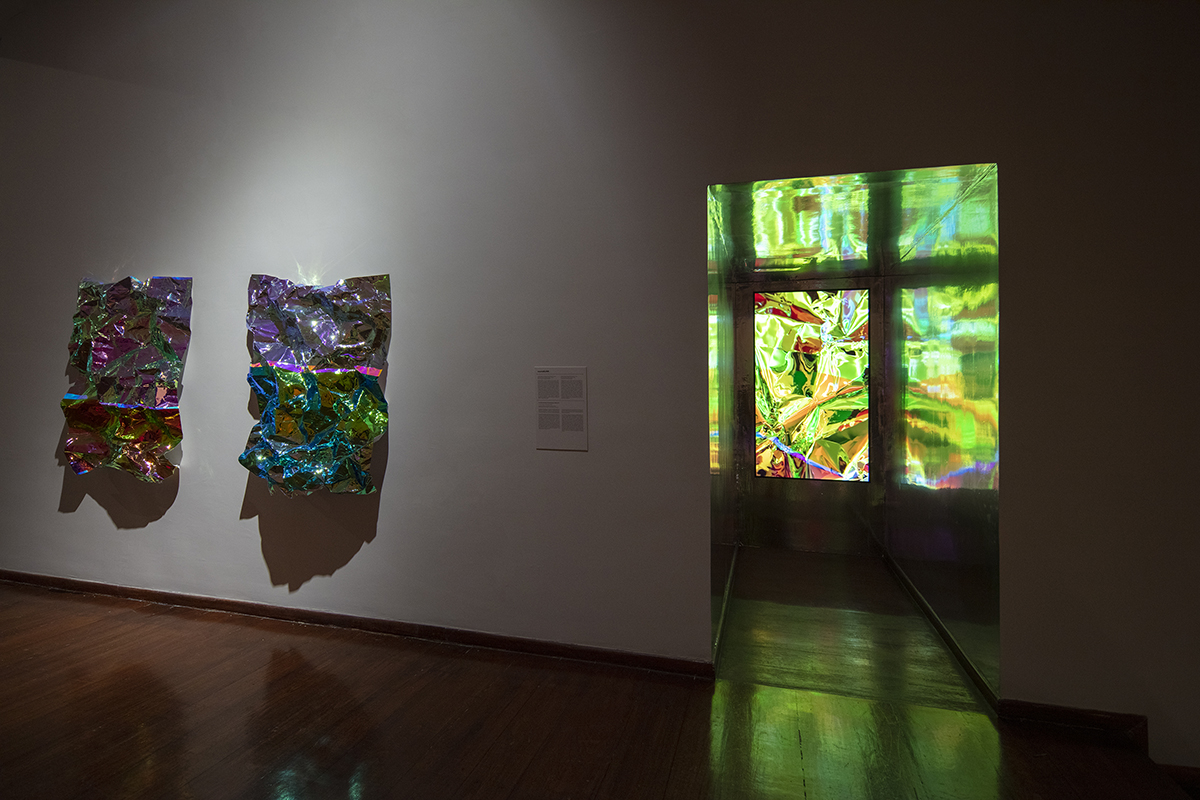 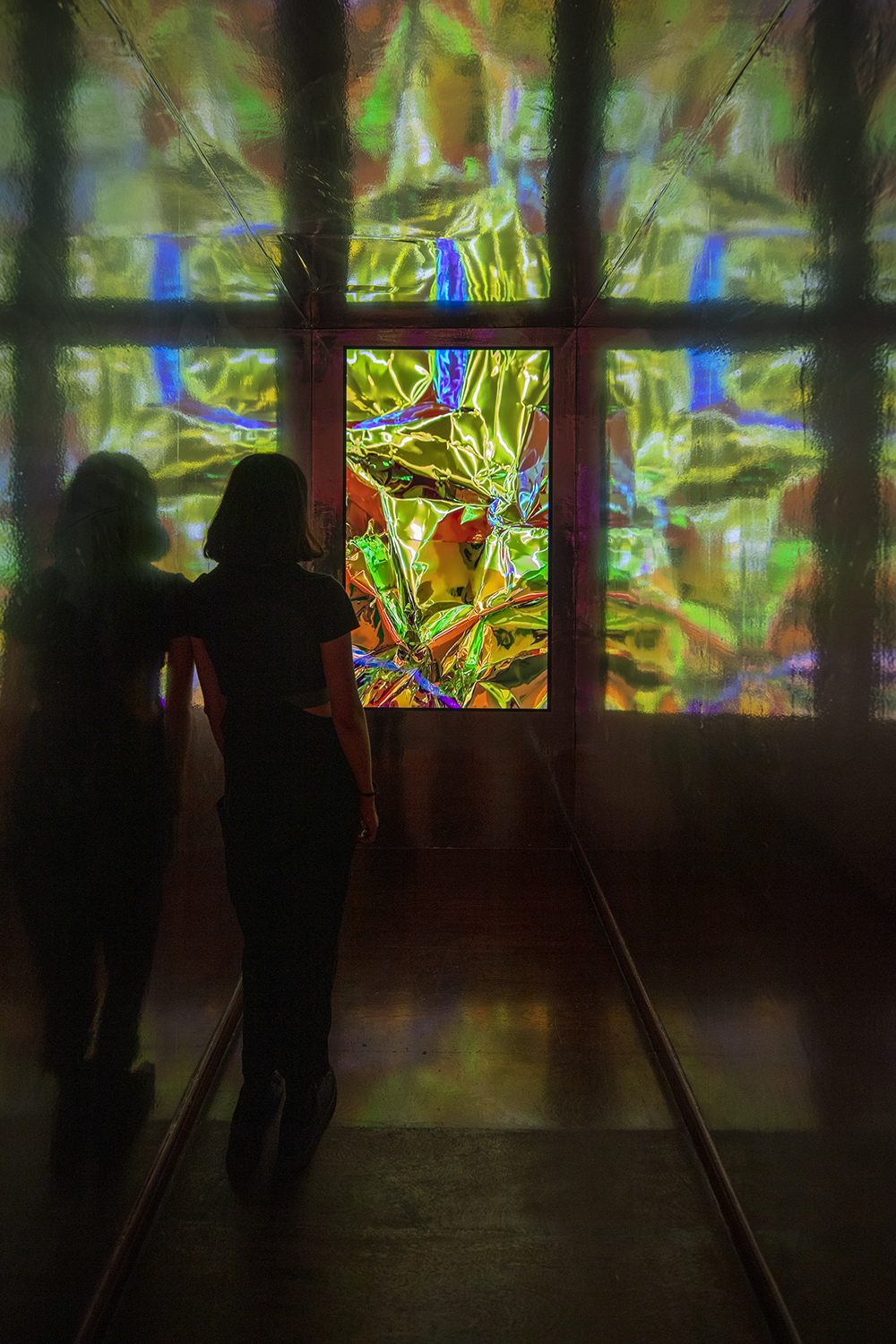 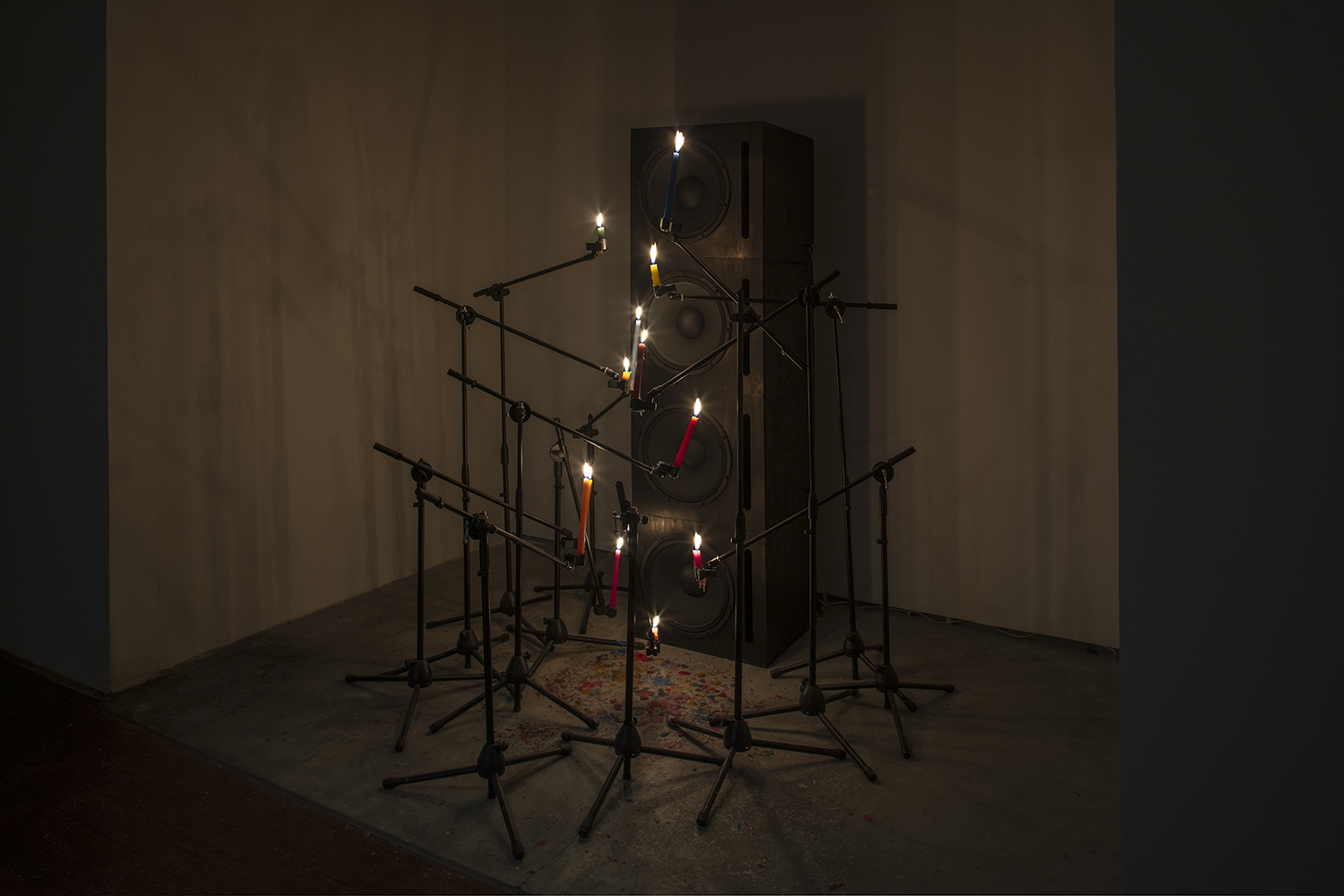 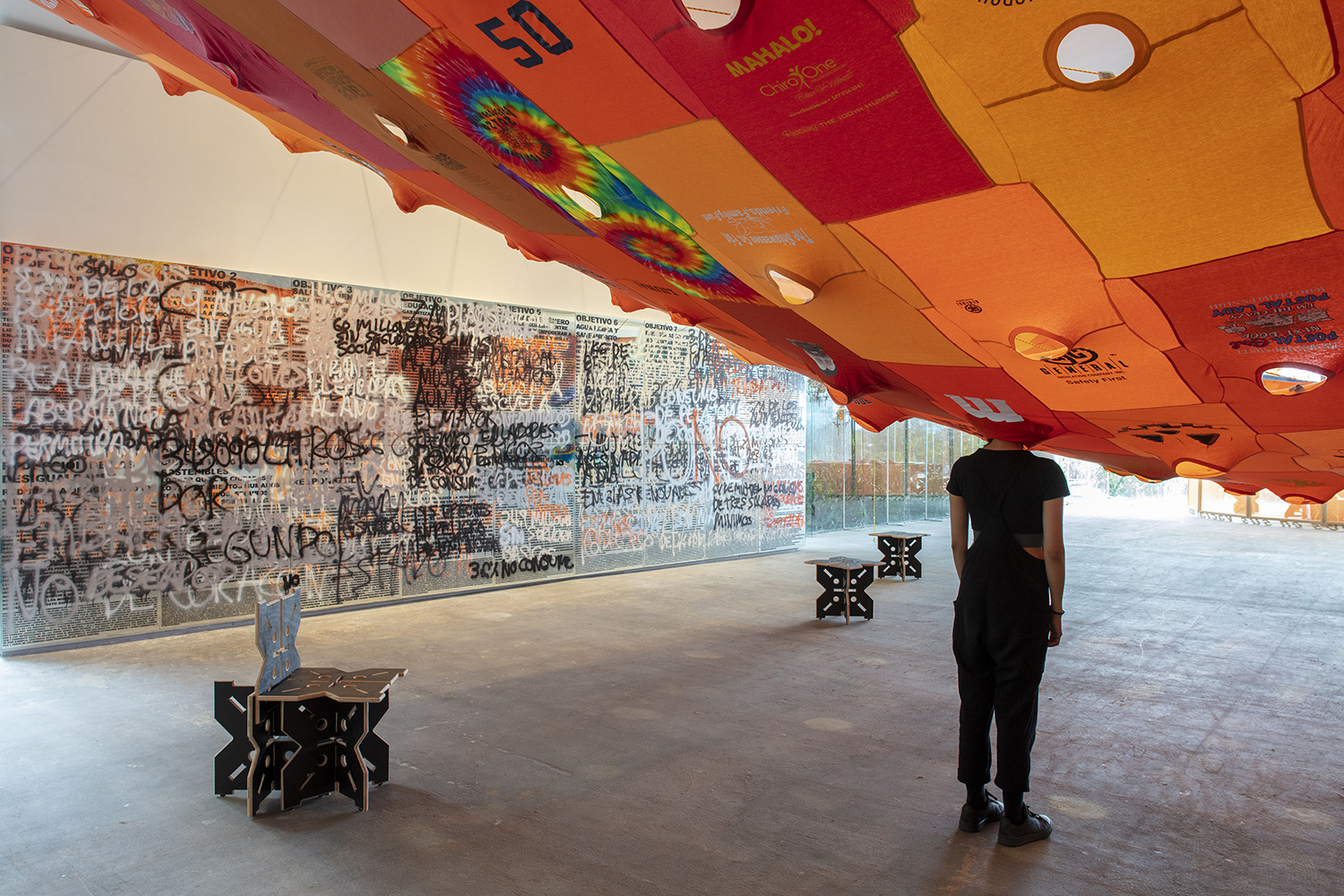 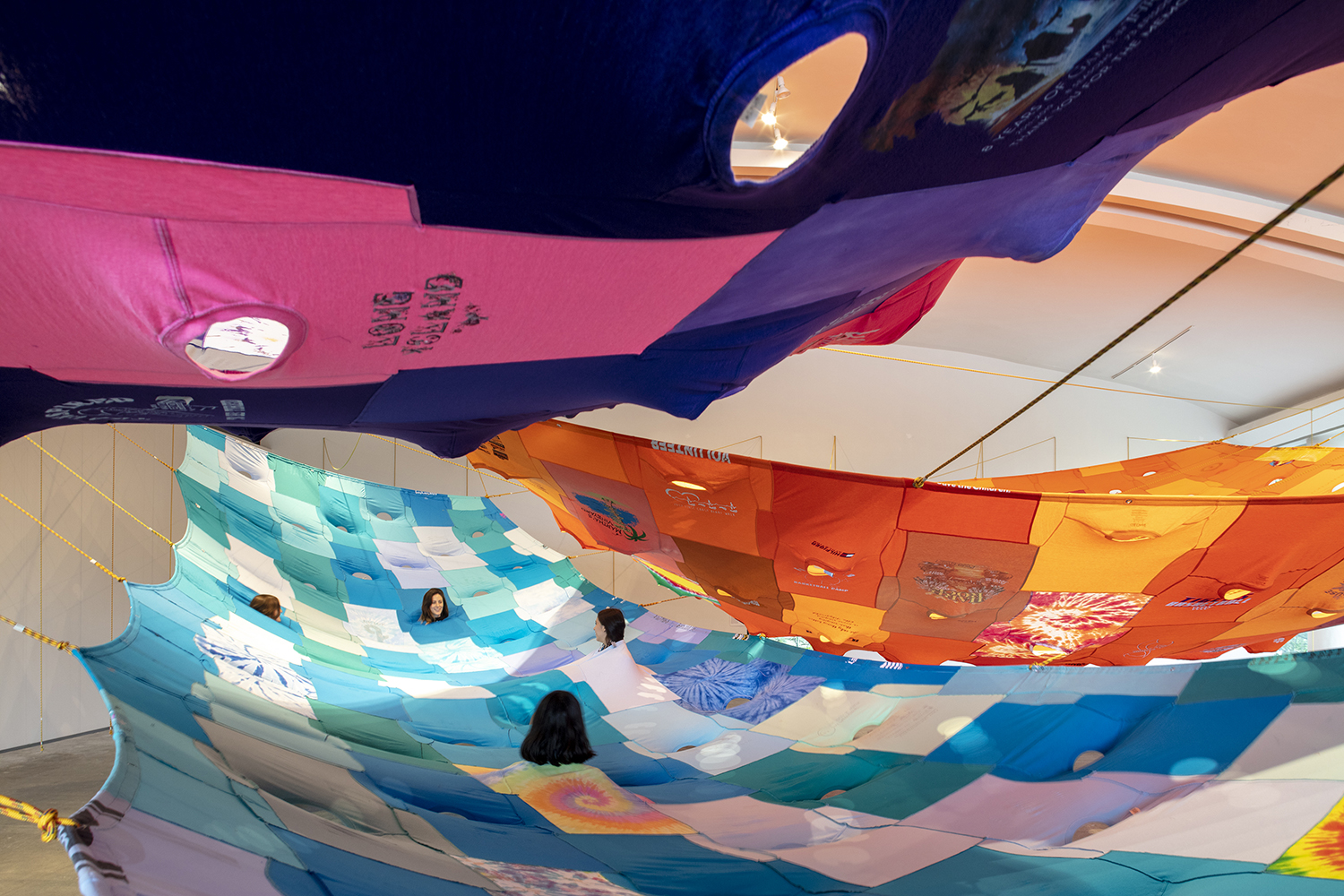 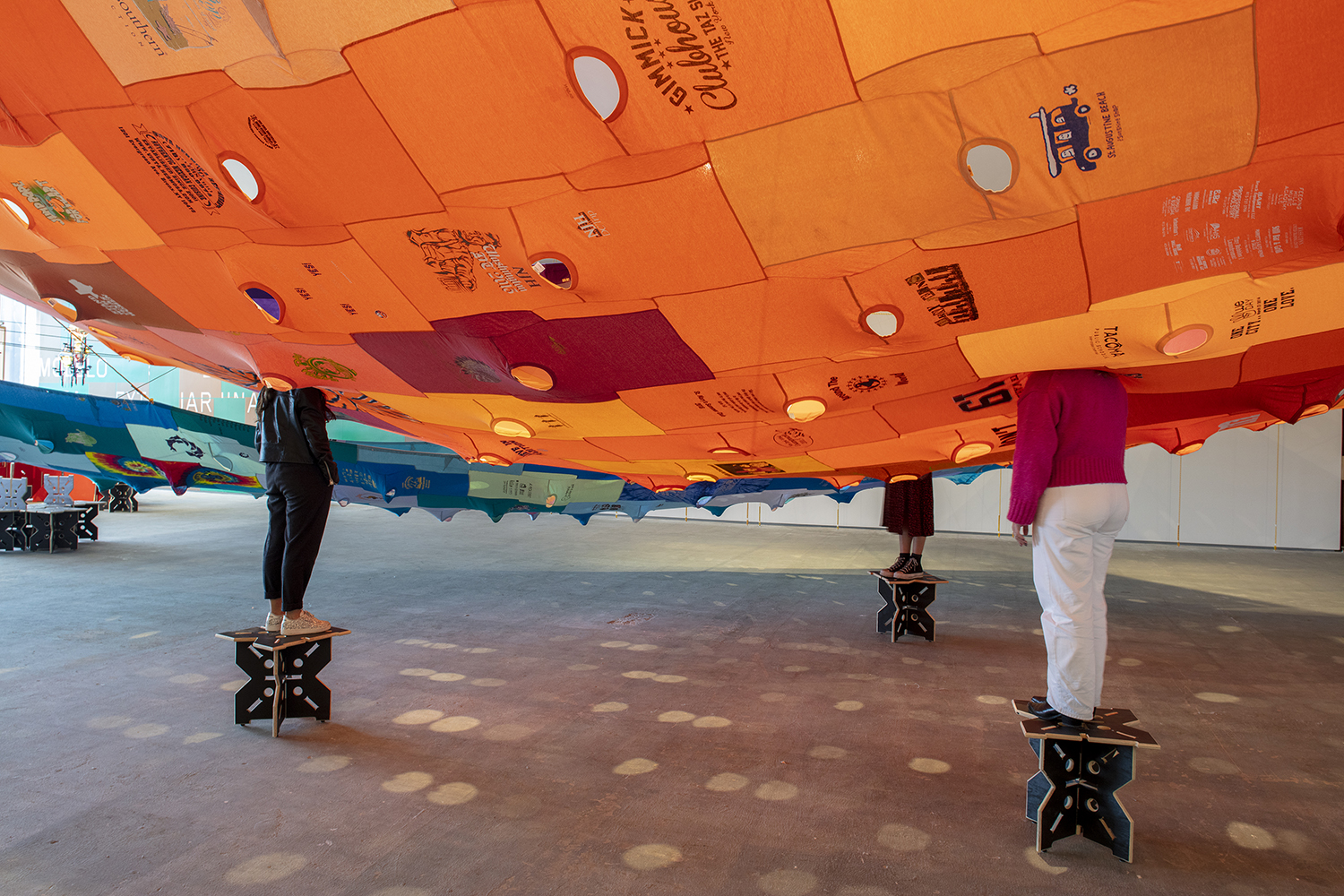 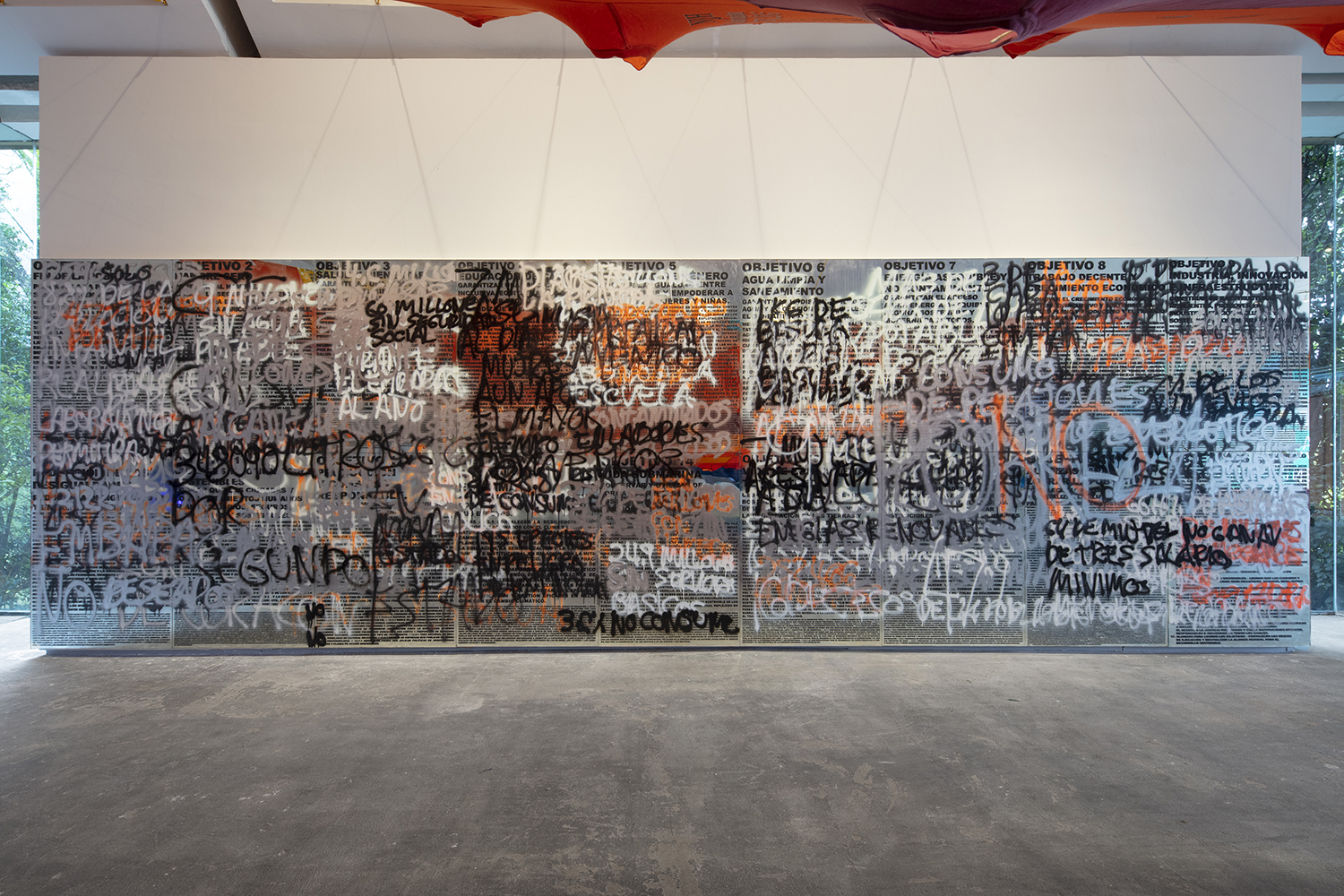 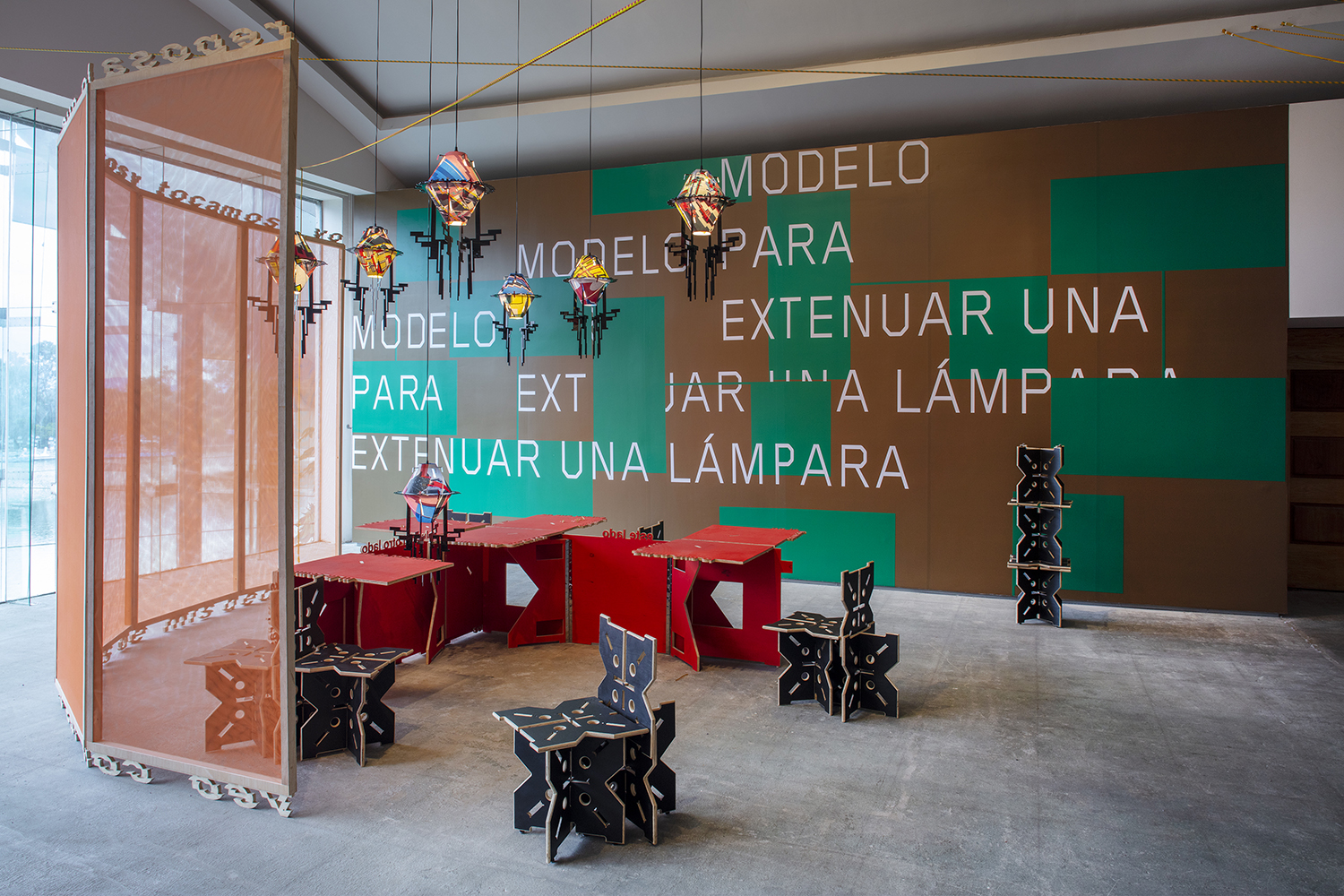 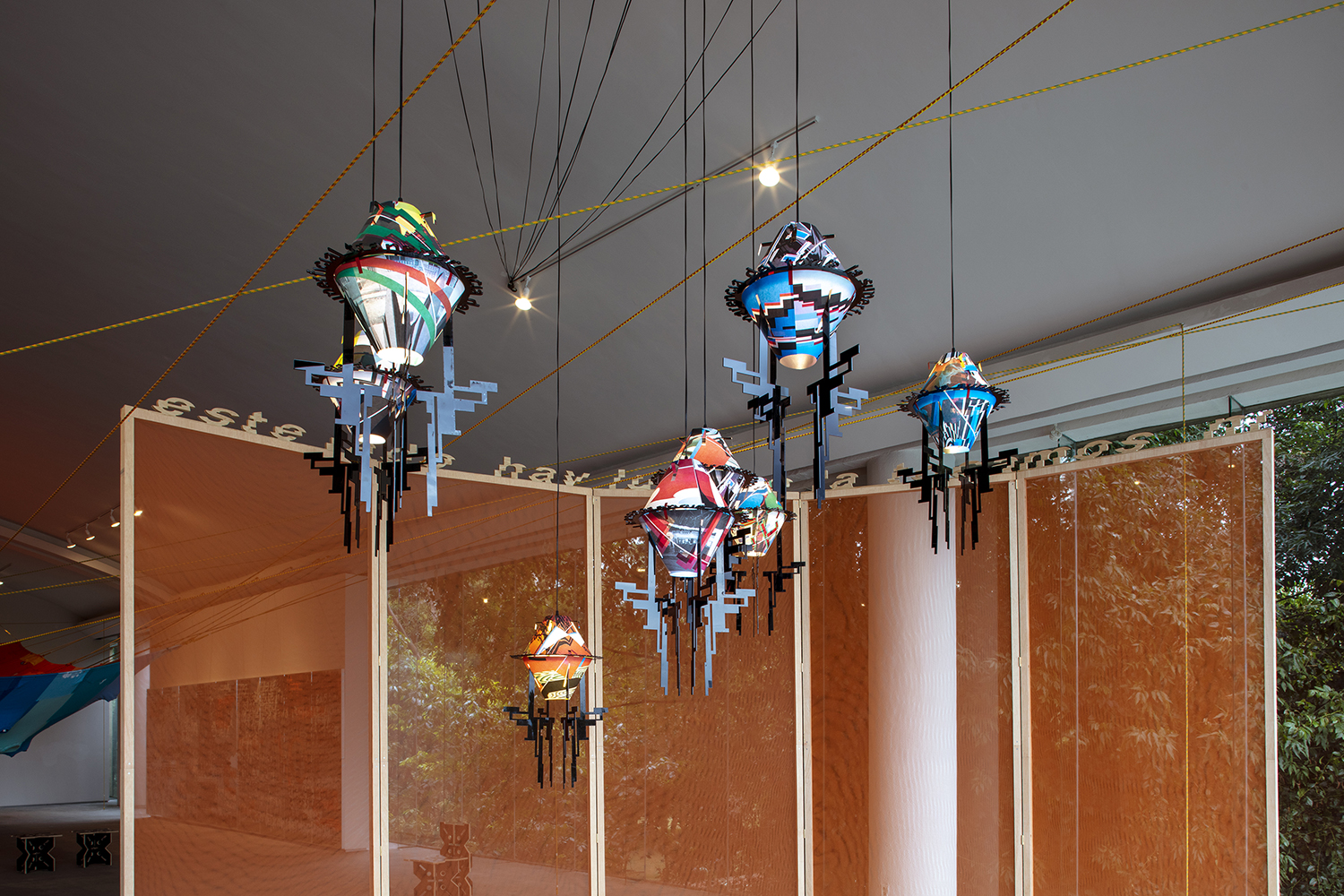 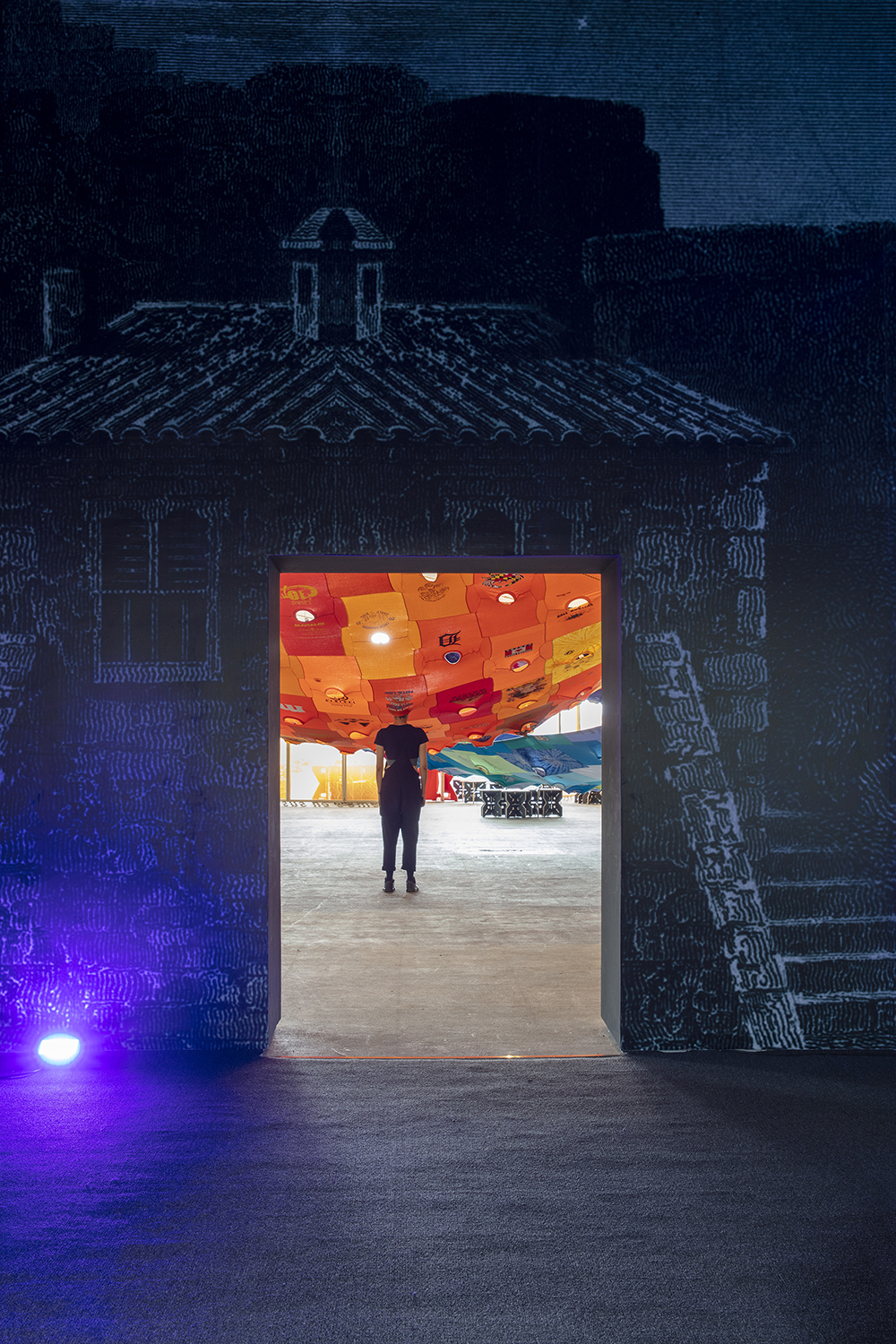 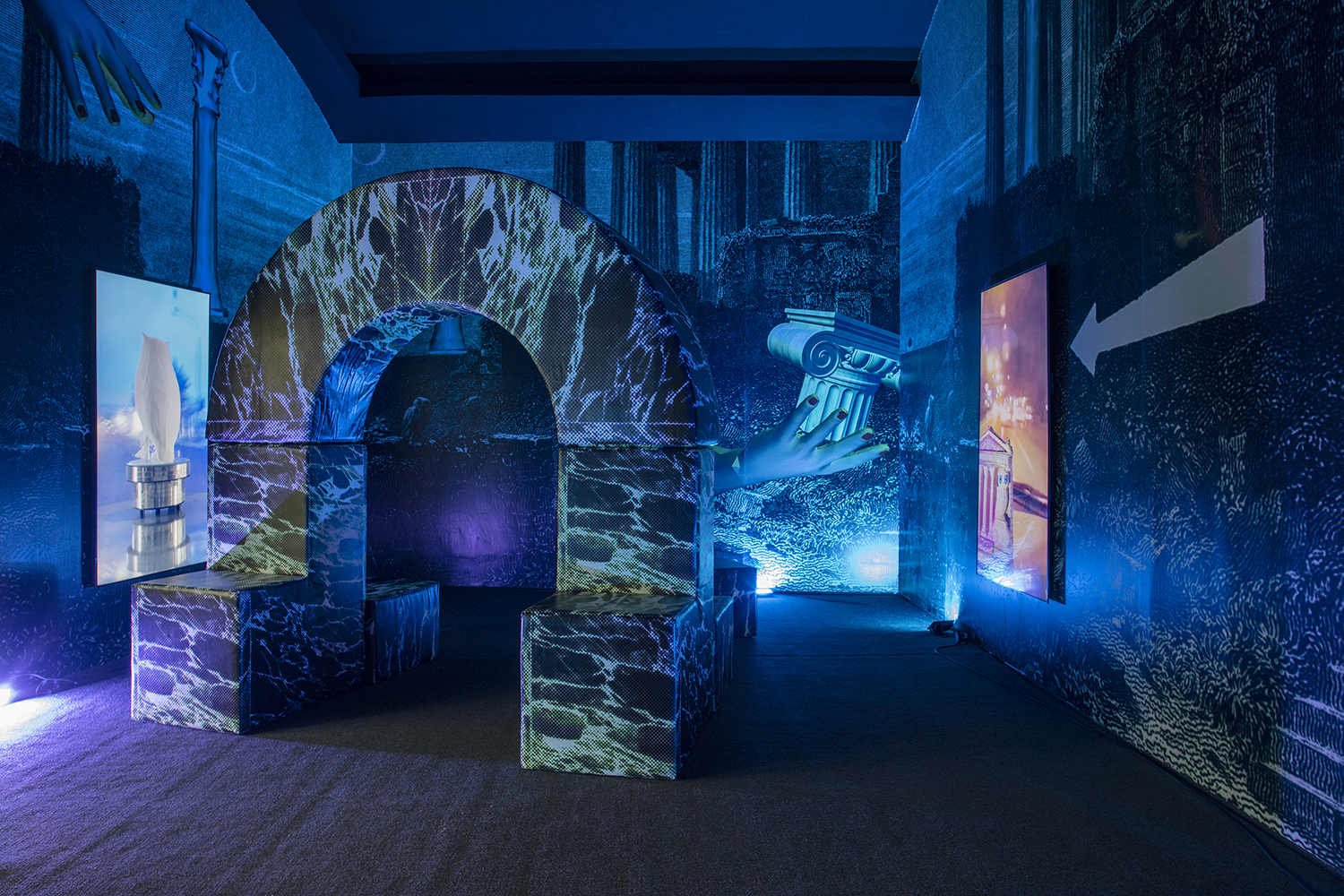 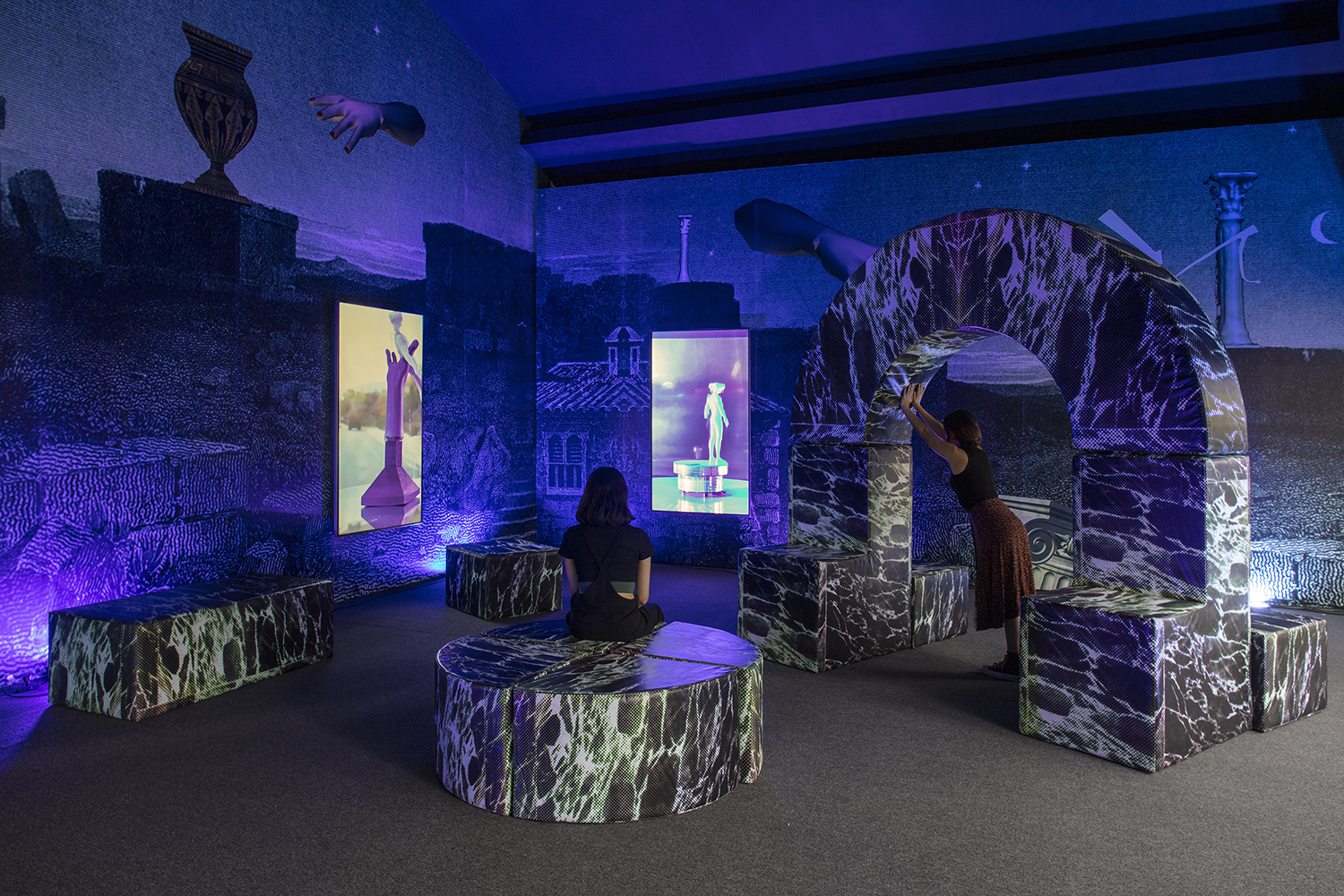 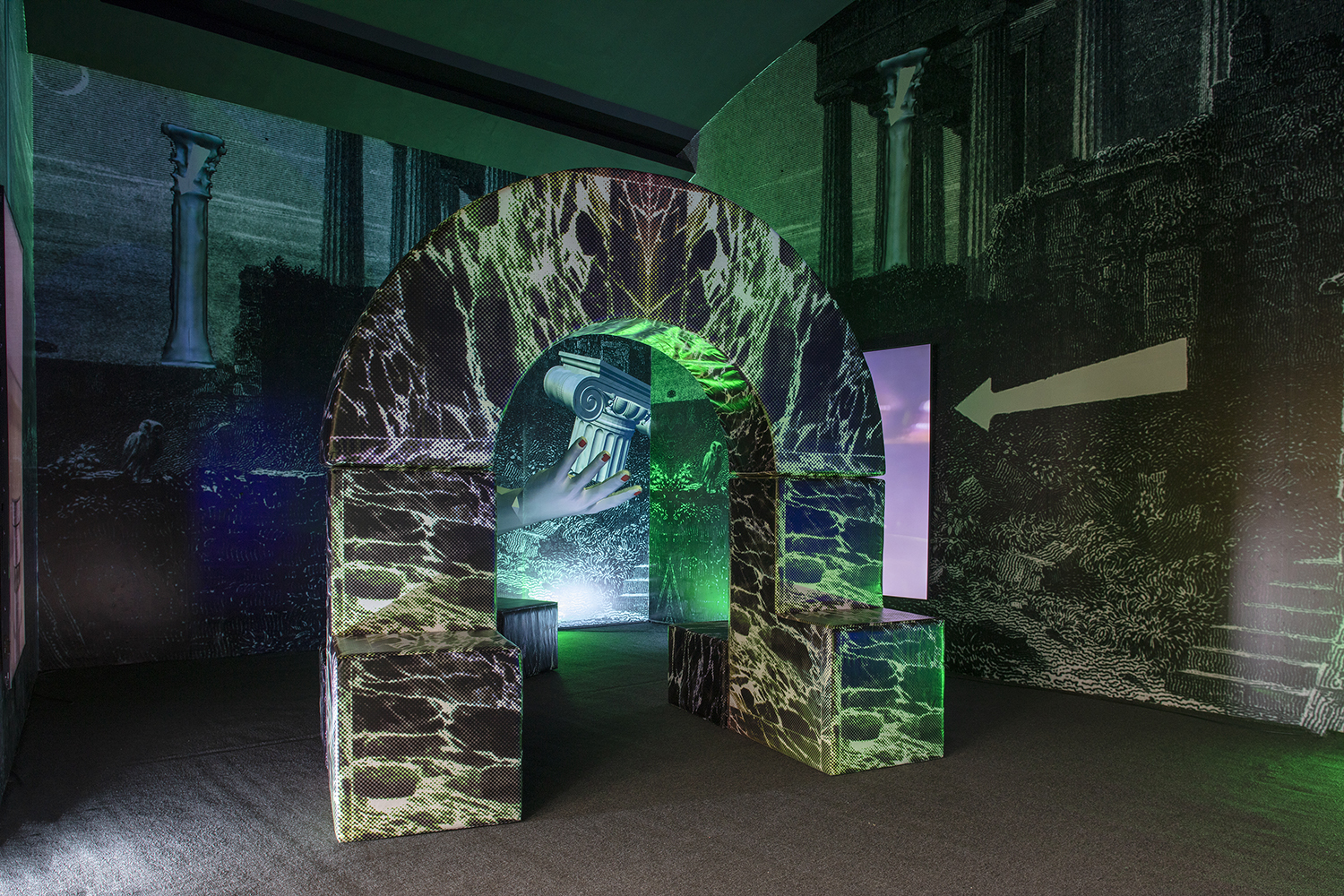 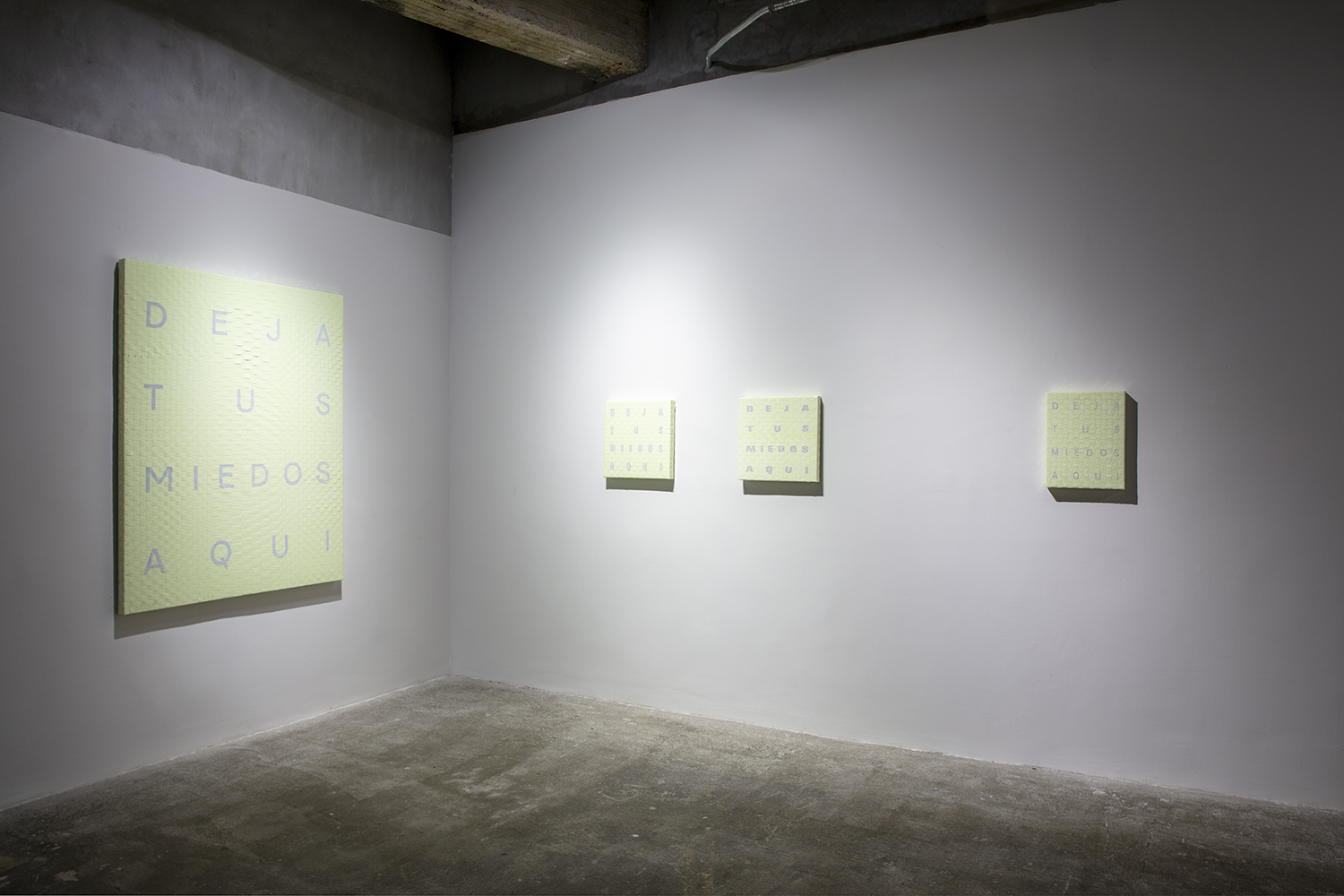 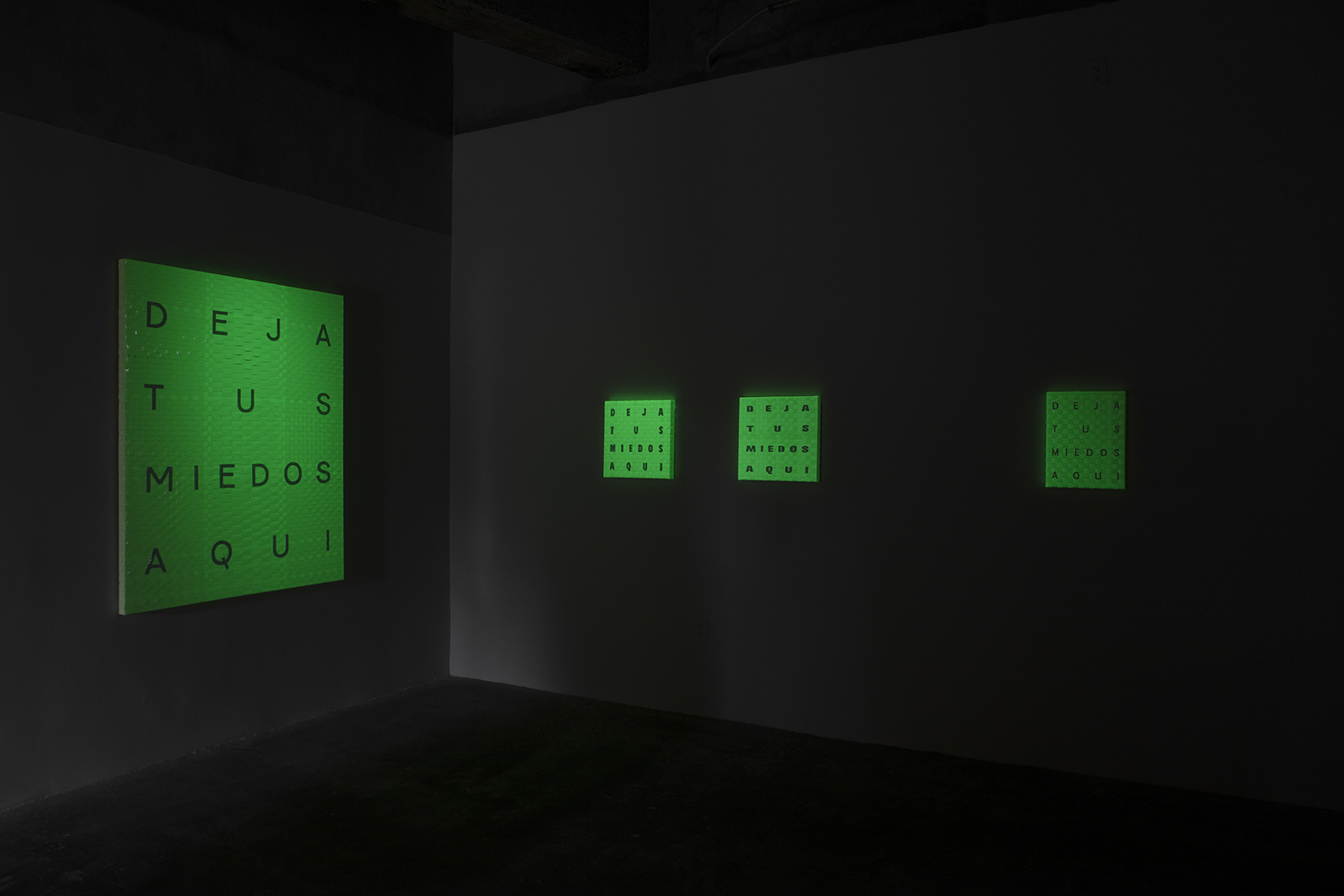 LagoAlgo’s second exhibition, Shake Your Body, opens a second chapter and stands as a manifesto of the direction of its revival: a living platform that activates the connection between various communities and reflects on a global scale whilst acting locally towards transformation.

The expressions “To Make Society” or “To Live Together” are as laudable as they are vain if they are not anchored in a principle of tangible reality. Beyond the laws, states, and power structures that lay down its contours, what is the organic reality of our interrelations? Despite being aware of the importance of social cohesion and feeling the desire to contribute to it, how can we foster the meeting of our energies? What do we share, with whom, in what context, and for what project?

From the fine theories of political philosophy to the latent demagogy of our representatives, our social models are becoming uniform, our behavior is becoming formatted and individualized, crushing our shared but isolated will to experience the common. Social inequalities are increasing every day, management is imposing its values more than sincere and disinterested commitment to others, indifference takes over on solidarity. Yet paying attention, the common is everywhere. In a football stadium wave, shivering across the bleachers; in a spontaneous chorus shouted by the crowd at a concert; in front of a breathtaking sunset by the sea, or in a shack built with friends. The experience of the common is a social body that trembles with the same skin, shouts with the same voice, marvels with the same eyes, and builds with the same hands.

A common ground despite our differences, culture is a place to get together. Building bridges to the island settled upon utopian roots that is LagoAlgo, this exhibition intends to awaken the incredible synergy sedated by our daily lives within an active experience of works not conceived as objects of entertainment, but rather as paths to explore together. This renewal of utopia – at a time when models of social transformation seem exhausted – is not a return to the ideal, but an invitation to think of the breach, the error, and the multitude as a source of a fertile hybridity. Rather than trusting in the return of growth and thinking that it will solve all problems without creating new ones, rather than dreaming of El Dorado, singing mornings, and ideal cities, there is a need to reinvest civil society in all its actual potential.

At a time of permanent competition between individuals encouraged by social networks, the duo :mentalKLINIK (1967/1972, Turkey) dislocates mundane materials to create a new aesthetic form that is seductive. Their universe can be experienced as festive and glamorous, yet surprising and abrasive, as violent and paradoxical as a bad trip after partying. They claim the sparkling and authoritarian visual language of the media and the nocturnal culture in a climate of sensory hyper-stimulation. With Are You Liked Enough (2022), the exhibition space becomes a nightclub as well as a digital realm, both calling for other’s validations from the entrance to the mirror’s selfie. With Terribly Jolly (2022), the duo challenges our unanimous attraction to glittering, seductive objects and our reflection in their paradoxical meanders. Through a chromatic immersive device, reality fades between the fake and the superficial. Neon or chrome oxymorons reveal the artists’ characteristic sense of acerbic poetry and invade the space through other forms: abstractions that are brilliant to the point of being blinding, and a video in which glitter and sequins become end-of-party waste. In a balance of irony, they reflect the effects of accelerated capitalism and challenge our relations to selves.

Andreas Angelidakis (1968, Greece) addresses the question of site-specificity at the time of its multiplicity. He creates immersive installations co-constructed with the public into new and fun living spaces. Fascinated by ruins of the Athenian urban landscape, both ancient and recent, he invokes the notion of ‘post-ruin’, telescoping different temporalities. Using design software and the Internet, he builds virtual worlds to foster the emergence of other forms of sociality. In his videos and 3D animations, he questions the specific nature of sites in the age of digital ubiquity, anticipating the ruins of our contemporary era. Between stepping carefully into a teenager’s room and being drawn into a video game, the artist embarks on a journey to Athens By Night (2022) and explores the digital ruins of our time. He transforms a journey through the remnants of the ancient city into an immersive environment, querying the history of Athens against other possible futures. Like so many archeological fragments of Greek marble, foam cushion modules are multiplied into copies of themselves, movable and stackable, they lend themselves to the free interpretation of visitors. In a playful metaverse-like city, people are invited to rest, discuss, daydream, or take part in a collective permanent construction aiming at rebuilding common worlds. From Greece to Mexico, the artist insists on our power to reassemble the pieces of our culture, both materially received and digitally shared.

Alicia Framis (1967, Spain) is an artist whose work often starts out from actual social dilemmas to develop novel settings suggesting solutions. She uses urban social spaces to address the human experience, our frustrations and anxieties, whilst creating outlets for our dreams and desires through creative social interactions. The exhibition starts as she invites the audience with Leave Here Your Fears (2022) to abandon prejudices behind whilst entering the building. A necessary lightering to receive from and give to one another by letting go of our apparent differences. The mirroring diamond-shaped vessel operates both as a memorial for our abandoned fears and a sanctuary to connect with the world as a conscious part of it. By allowing people to materialize and delete their toxic daily thoughts, Alicia Framis sets free whoever is willing to let go from their mental loops and willing to be available to the other.

Through objects, installations, performances, and original music, Vivian Caccuri (1986, Brazil) creates situations that disorient the everyday experience and consequently, interrupt perceptions sedimented in culture and ingrained in cognitive structures. She investigates the physical, sociopolitical, and spiritual impact of sound, especially the unwanted or subaltern ones. With The Weeping Dancer (2022), she uses the image and function of the speaker as a power tool. Lit coloured candles stand in front of the monumental façade of a sound system, from which the subwoofers emanate a barely perceptible music piece created by the artist, claiming our attention – both visual and auditory. Inspired by early Christian music, the artist seeks sonic forms in which the bass still performs as a vehicle for the mind through body and skin. Held by mic stands, the flames set in motion work as many potential voices striving to exist against the structural power of society symbolized in a skyscraper-shaped speaker.

Using the flexibility of textile and aesthetic potential of secondhand clothes to support her anthropological sculpture experimentations, Pia Camil (1980, Mexico) explores the relationships between bodies and architecture, domesticity and consumerism, or art and spectacle. The collective enjoyment and activation of her performative pieces emphasize the importance of collectivity and its celebration, whilst forming a yet critical position. With her installation Bara, Bara, Bara (2022), she literally embodies the social by dressing everyone together. Unified in monumental sails from a multitude of colored  and printed t-shirts bartered in the markets of Mexico City, by putting our heads through the remaining holes, the connection goes beyond connecting to the group visiting, but also to those who wore the clothes and to those who will. Through her selection, the artist creates a collage-patchwork of slogans forming a snapshot of post-capital collective consciousness and aspirations, bringing attention to shared experiences and inequities with commerce and the mechanisms of globalization.

In his practice, Stefan Brüggemann (1975, Mexico) is concerned with language and “words that become images,” questioning the idea of the transfer or image of information. He explores situations where language becomes a way of reflecting the event. Known for confronting the apparently rather distant forms of urban rebellion graffiti and conceptual art, he unrolls a unique “punk minimalism” vocabulary. Together with PienZa Sostenible, a Mexico City-based non-profit organization focused on analyzing, studying, critiquing, and implementing the 2030 Agenda for Sustainable Development in Mexico, Stefan Brüggemann created ODS (2017). This work reflects upon Mexican political contradictions by superimposing on mirrors key data about Mexico on the 17 Sustainable Development Goals of the United Nations 2030 Agenda (Objectivos de Desarollo Sostenible). In a typographic confrontation, the popular discourse in the form of graffiti – the artist’s signature, and one of the most primary forms of political demand that resonates particularly with the history of Mexican muralism – confronts the administrative discourse in Arial Black. Forced to see themselves through a more complete transcribed data, both actors confronted to the piece are plunged into this too often neglected gap between power and facts, recovering the tools of their capacity for action.

Lastly, Rafael Domenech (1989, Cuba) conceives objects colliding in space, organizing a sequence of artworks with physical or theoretical connections into a larger system, especially their own fabrication. His work explores how the artwork itself is part of an ecosystem of practices outside the studio, into the institution, and the world beyond art. A story of human relationships before aesthetic considerations. The artist invades the space with a spatial manifesto as every element – from modular furniture and lamps to space dividers – is a structure that displays either text or image. Through a series of workshops, the artist extends the exhibition outside the exhibition space and invites us to bring back our productions home. The combination of all these elements concludes on an immersive visual essay exploring ideas of how individuals negotiate urban spaces, communities, and sites. Recyclable, erasable, and short circuited, Model to Exhaust a Lamp (2022) also explores fundamental production issues, whilst creating spaces of collectiveness.