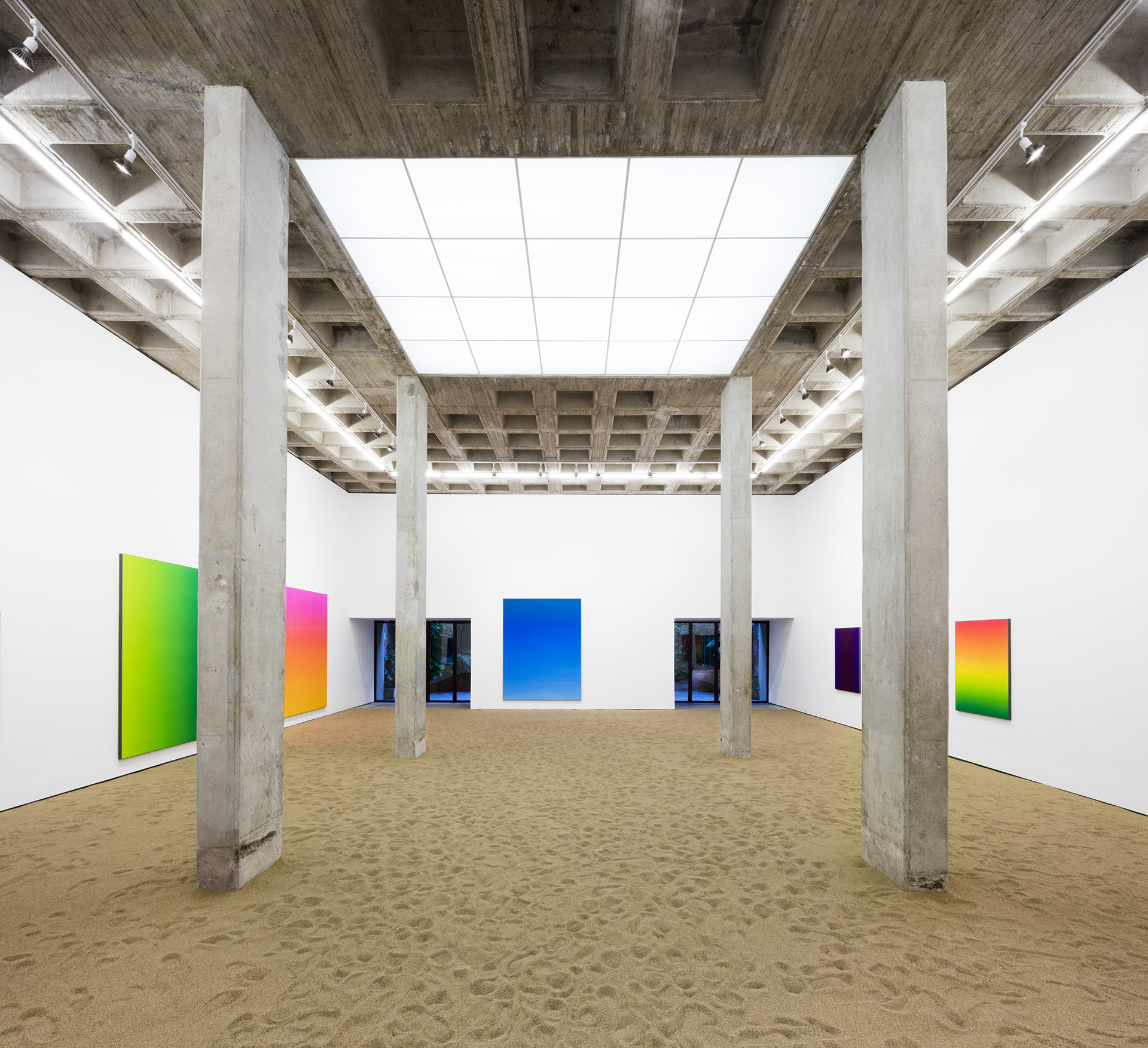 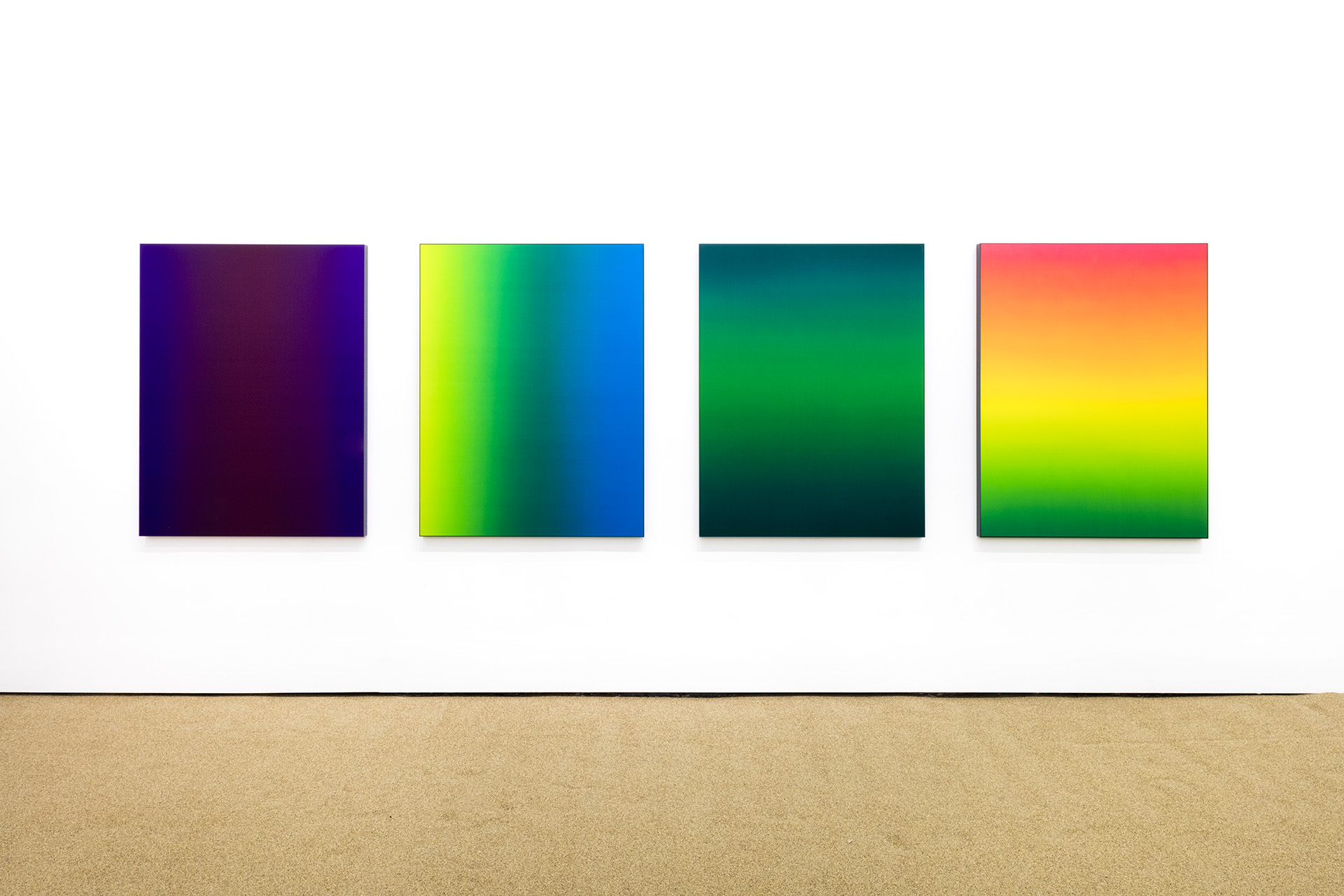 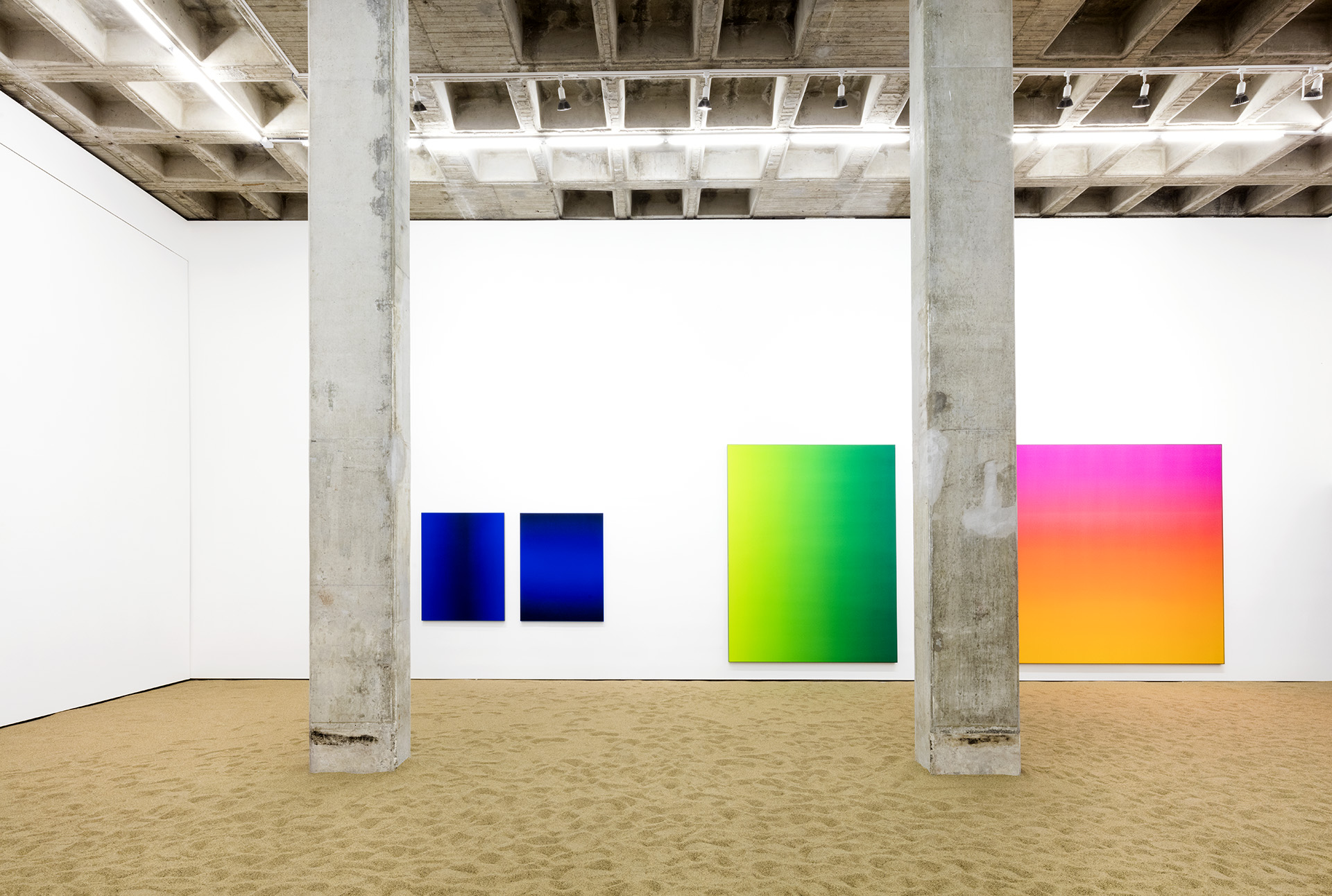 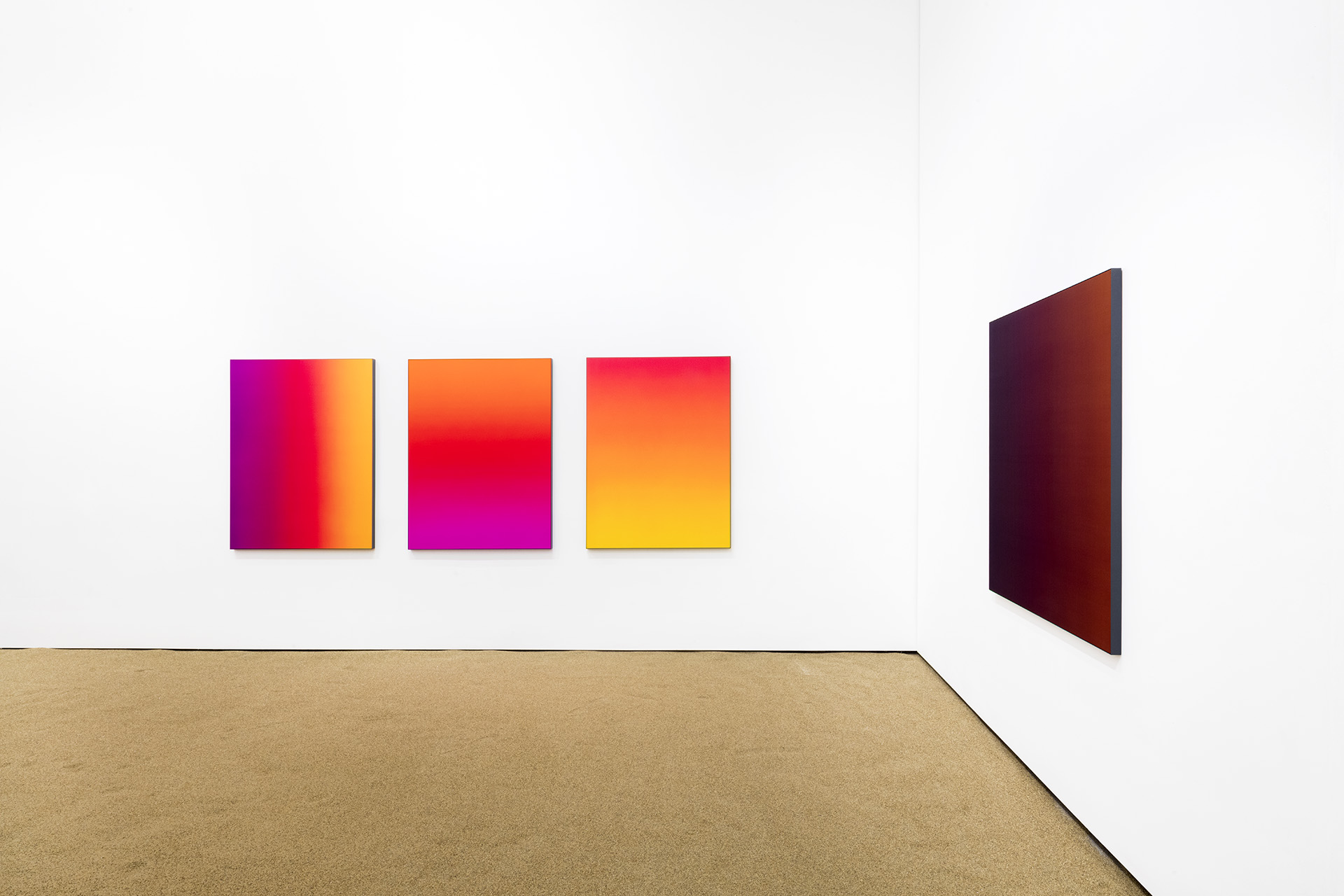 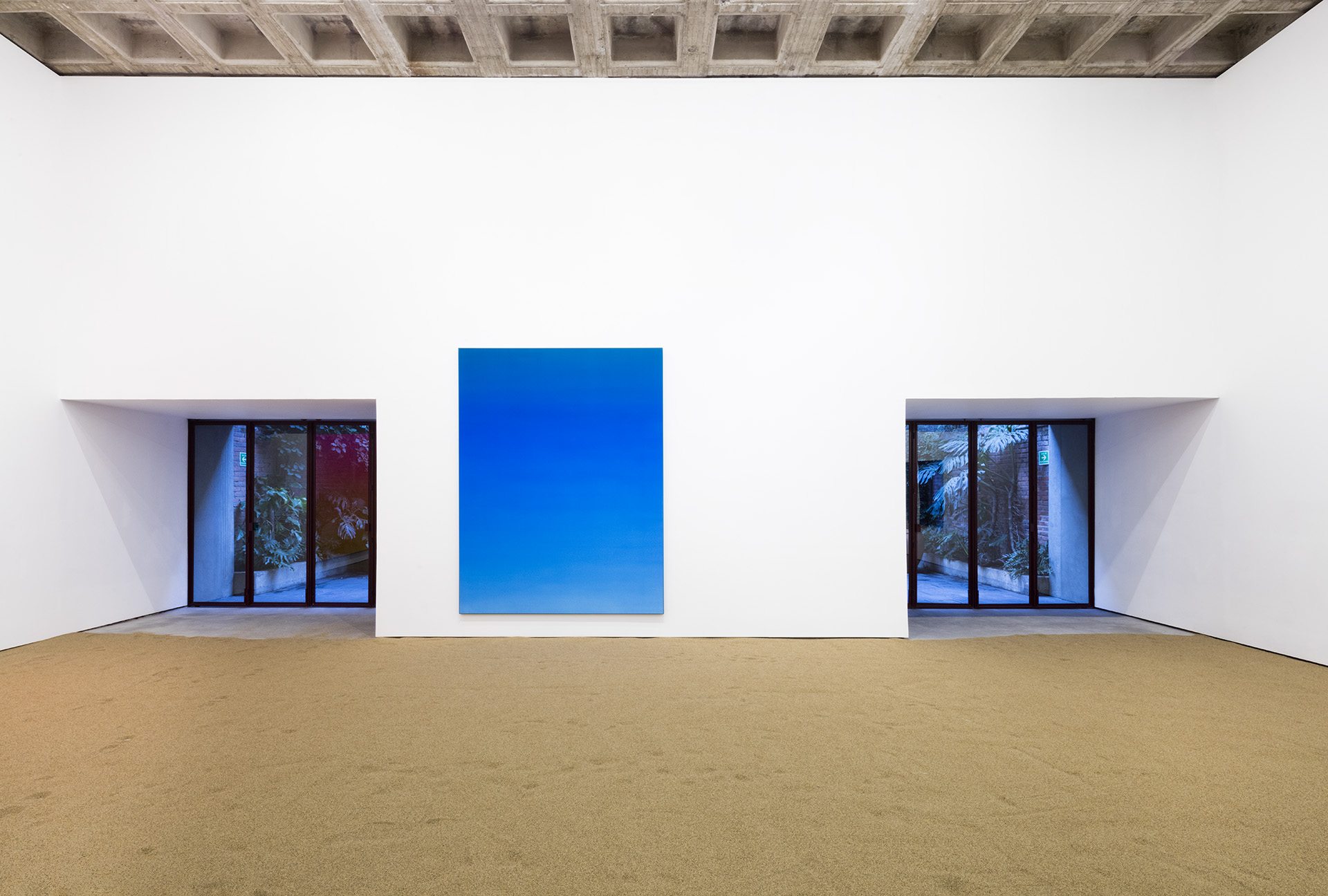 OMR is pleased to announce the first exhibition in Mexico of Finnish-German artist Matti Braun (Berlín, 1968). Sol Bo draws from Braun’s research into traditional silk production, consisting of nineteen new, framed silk works with the floor of the gallery covered with fine-grained sand, tracing the tracks of absent visitors. The soft, abstract colour progressions of the pieces appropriate the religious and ritualistic history of silk painting. Removing any palpable figuration or iconography, instead seamless washes of colour initiate a hypnotic intensity, the seeming simplicity of which belies the technical complexity of their production. Braun´s chosen methodology is particularly laborious in the time taken to reach the exact colour field. Smooth planes of sand quietly change, interrupting the viewing landscape whilst at the same time they echo the gradual colour modulations.

Making visible patterns of migration, Matti Braun´s work alludes to the typically unknown, even ignored, cross-cultural effects of globalisation. From the ancient Silk Route connecting the East to the West, to a now generic iPhone screensaver of a tropical sunset, the artist tracks specific examples of cultural appropriation in a non-linear manner. Vikram Sarabhai, an important figure Braun returns to, can be seen to embody a plethora of interdisciplinary associations. Founding the Indian Space Program in the 1970´s, he has since been linked to a wide variety of figures from Mahatma Gandhi, Le Corbusier, the Ulm School of Design to Lynda Benglis. In this way the artist’s attitude towards narrative is not to explain individual pieces but to indicate the multiplicity of their references. Importantly, these are not at first apparent and range from the historically correct to the misinformed.

The use of sand has appeared previously in the artist’s oeuvre. Untitled (2003), an ephemeral site-specific work for which several tons of Namibian soil was added to the public beach of the small Finnish Island Sandö. For the 2009 show Pierre at L’appartement 22, in Rabat, Morocco, sand was spread across the floor as an anchor for cultural and historical references specific to the location. Forming the third part of a series of international exhibitions, producing a poster for each – first Bo Lak at Esther Schipper Johnen Galerie, Berlin and currently Lak Sol at Kunstverein Heilbronn, also in Germany – Sol Bo presents the final culmination of colour and texture between sand and silk that relates to the surrounding location. For example the installation of the sand can be seen to reflect diaspora, the displacement of populations and territories, as it is transported from a local area in this case Veracruz. Yet it is together with the silk paintings, which although translucent, emit an inescapably bright potency, that specifically reflect the context of Mexico.