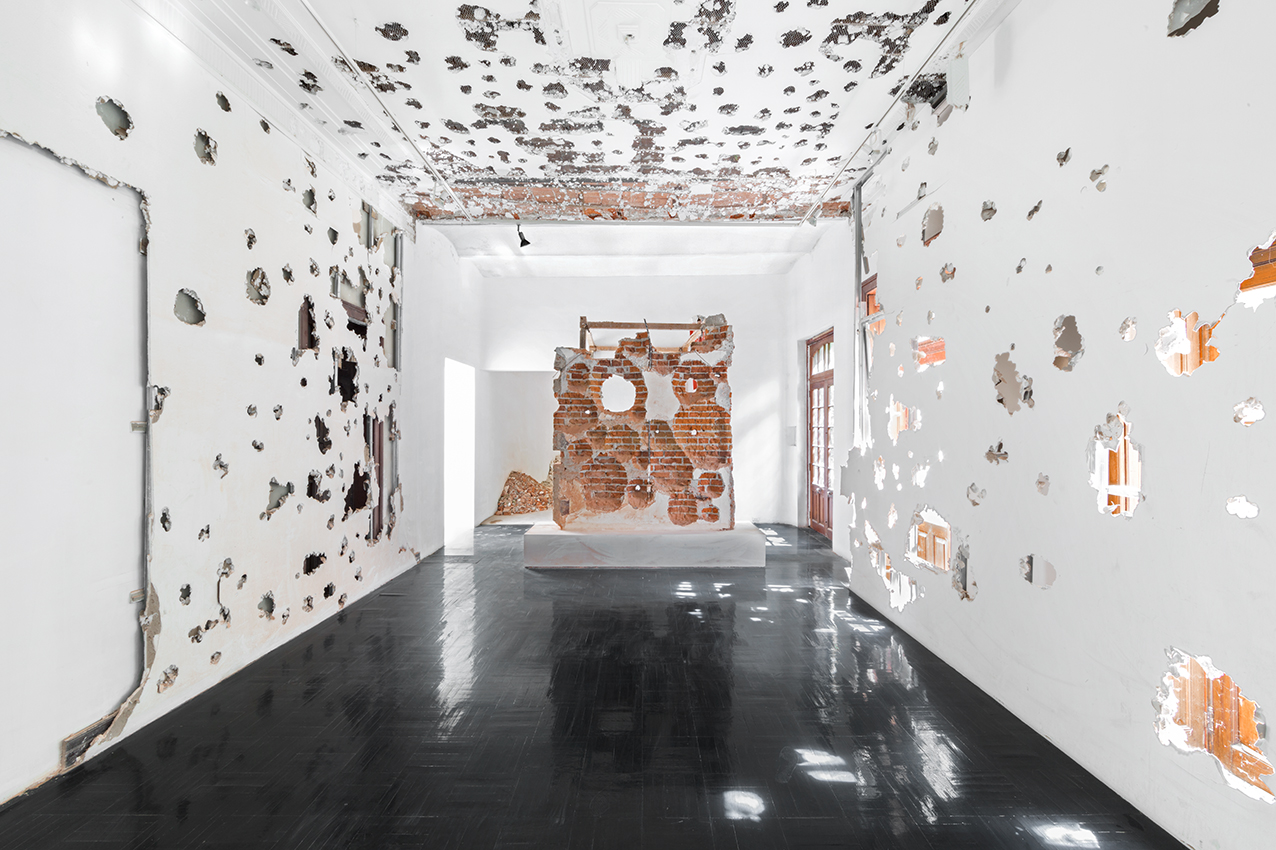 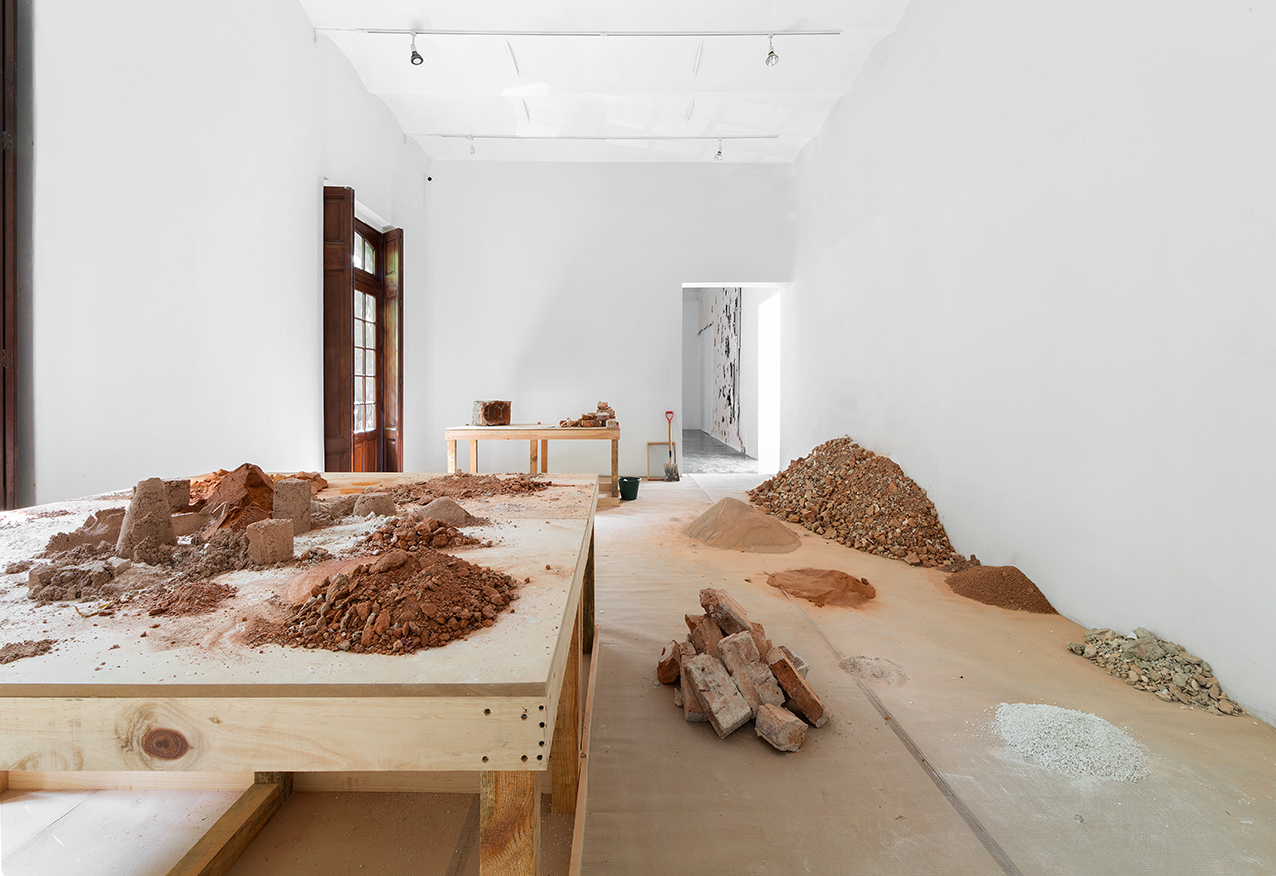 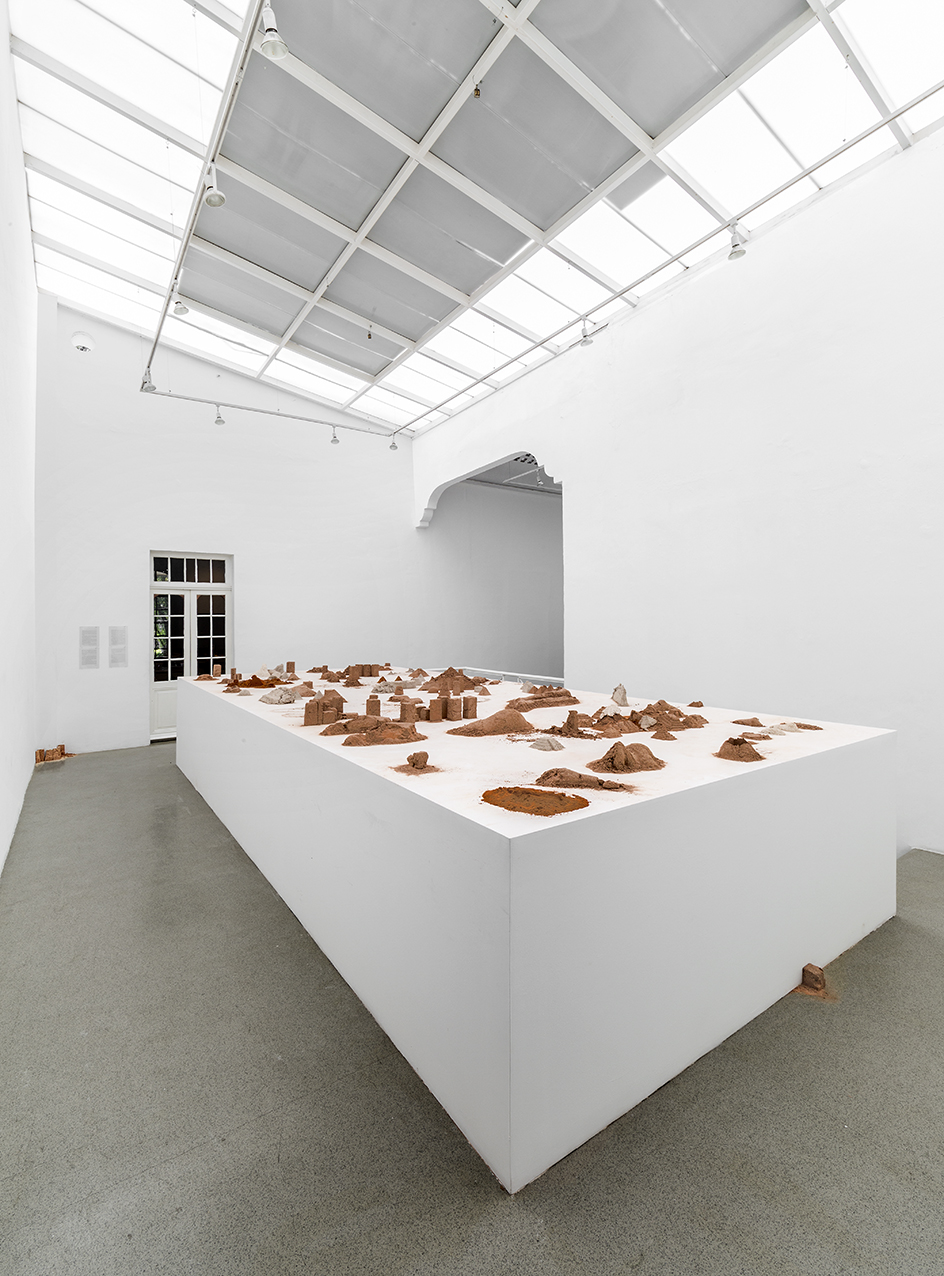 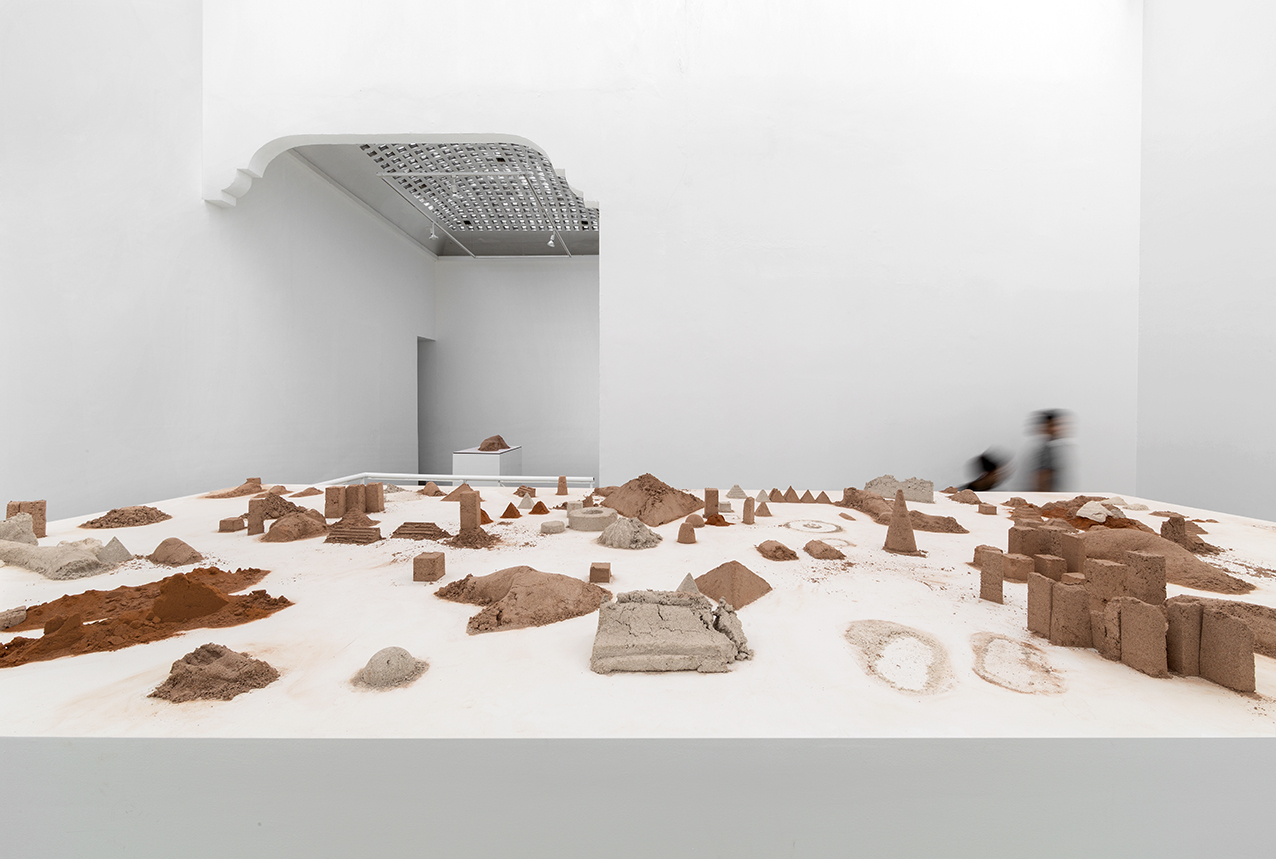 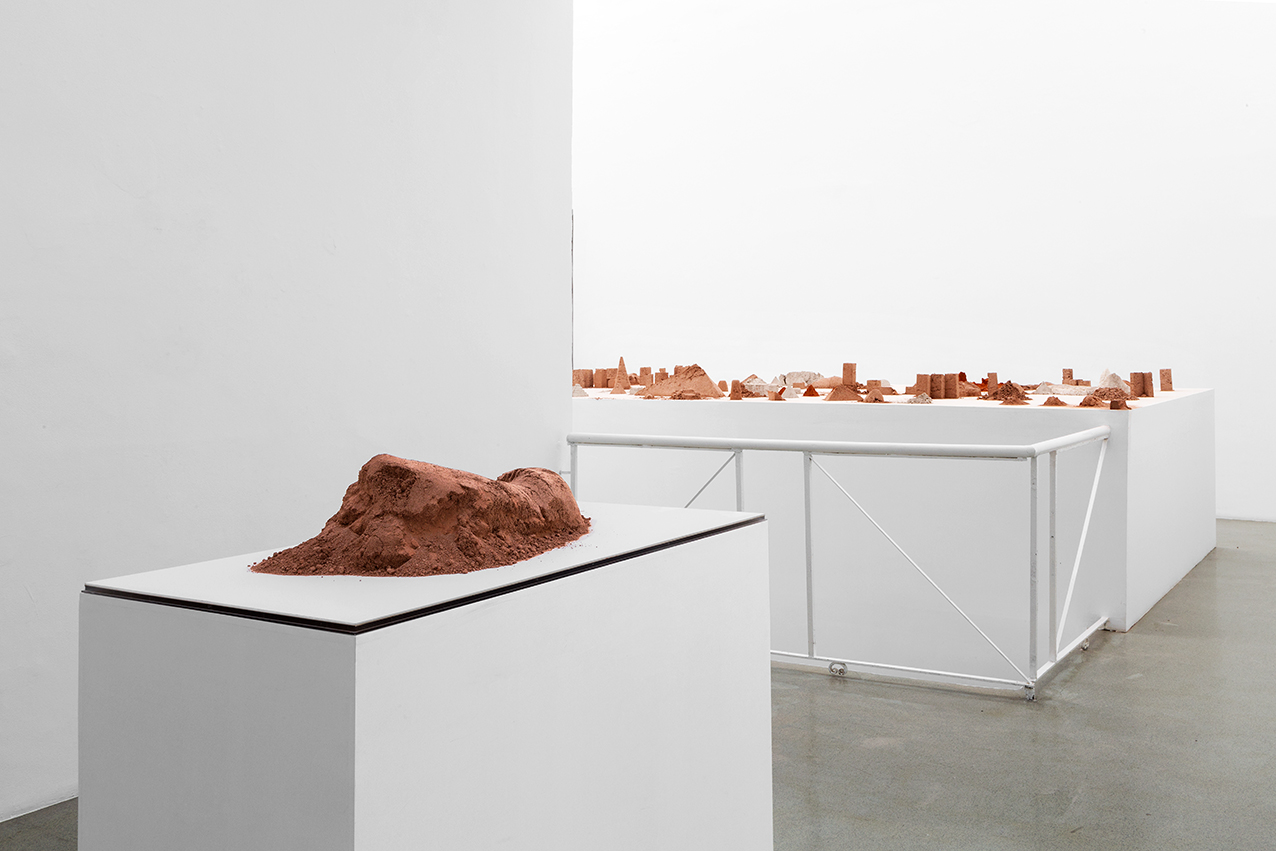 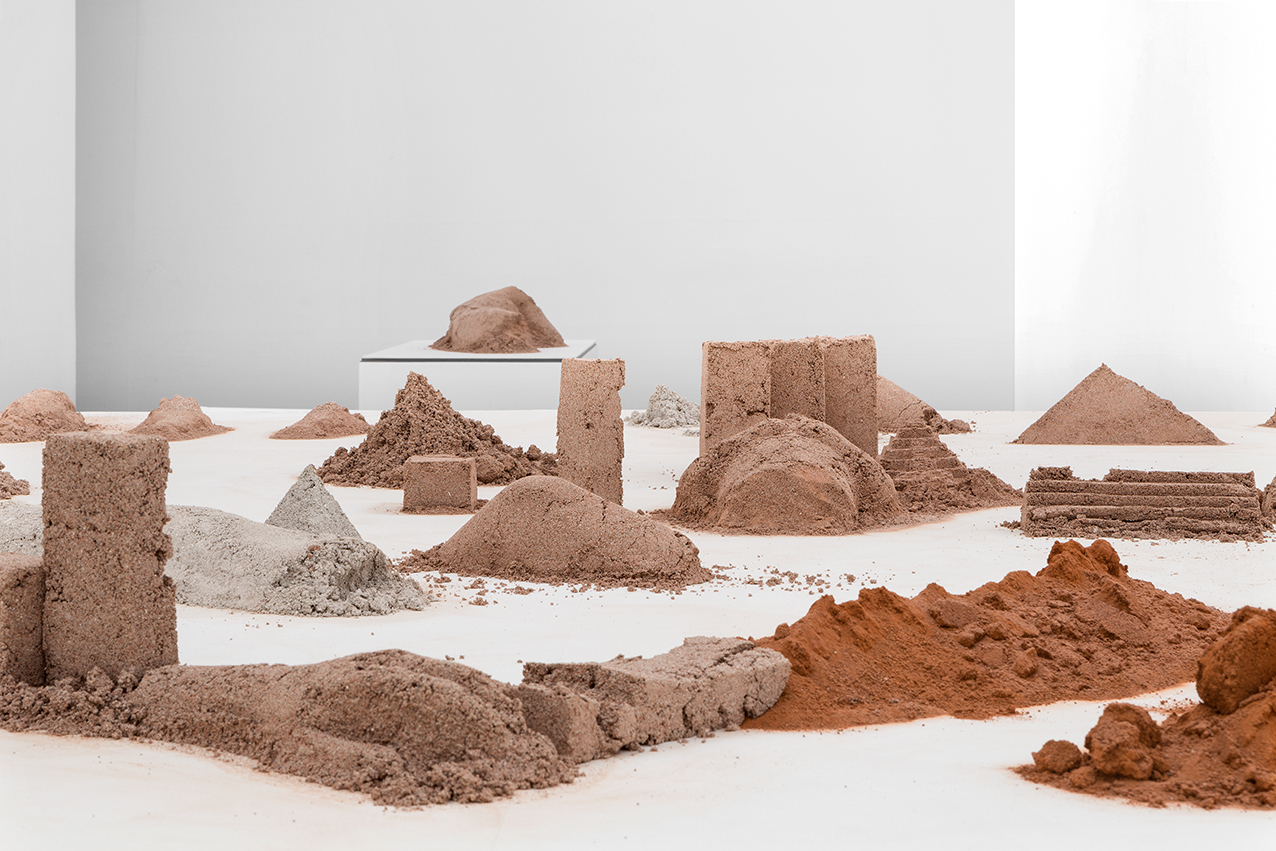 “Cultural history, seen as a setting for architectural transformation, can be understood as the flow of forms destined to decay, as if these typologies were a natural consequence of social, economic, and political orders. […] Ojo por diente (Eye for tooth), a sculptural project by Pablo Rasgado, preserves the narrow relationship with these debates concerning the “naturalization” of social forms. More than an allusion to the struggle between the strong and the weak, this in situ installation touches on a subsequent aesthetic sense in cultural history – its relationship to the erosion of the functionality of objects, in this case of buildings. With Ojo por diente, the artist proposes an interplay among precariously exhibited forms, that disappear into thin air without clearly revealing at first sight if they constitute traces of the civilizing mission, allegorical fragments, or interstitial objects that are as much cultural as biological vestiges.

The theme of the project is based upon the transformative processes of form, as a consequence of the irruption of a new function over a previous decadent one. These historical processes are seen more clearly in the context of architectural transformations, just as with the dismantling of ancient temples […] The problematic loss of identity for “the cultural” and “the natural” is reminiscent of the work of Pablo Rasgado who, re-using extracted materials from a house in renovation, to create fossil-like forms that eventually become debris.

[…] The title of the project, Ojo por diente, refers to the biblical passage “eye for eye, tooth for tooth,” which means that everything has its equivalent. This is out of line with the modern dialectic that considers culture and nature as opposites in search of a stabilizing synthesis. The processes of naturalization of a cultural event that articulates the artistic proposal, that is to say, the form in which we refer to the processes of “eternalizing” the estate commodity in its transformation into a fossil, are signaled in this case as consequences of the erosion of functionality. More than establishing equivalences, the work of Rasgado refers to the conversion of one into the other, contrary to the abandonment of “culture” and “history” to the natural order and its eventual entropic transformation into ruins.

[…] As a spatial strategy emerging from a specific site, the series of decaying sculptures that the artist molds from the rubble –the “excesses” of the original building– are made from intrinsic factors, that is, stimulated internally from the efficiency of the gallery itself.

[…] Rasgado offers a project of a paleontological nature, based in geometric and architectural forms that seem ancient, as well as geological and/or human figures. […] Just as entropic processes decompose solids, the sculptures transform into others, creating a narrative of temporal linkage between signs that come into being and melt away into others from the material itself. This arrangement, therefore, happens in a manner akin to natural processes as much as other, cultural, aesthetic, social, and financial processes, in that the fossil-like sculptures do not petrify in a natural “eternity,” but rather are constituted by temporal factors. In the resulting interstice of one solid becoming another solid by these architectural processes, such an outbreak of sculptural forms is an intermittent phenomenological display of figures that dissolve successively into the air, that is, insofar as they become unusable debris.

In its archaeological eagerness, this sculptural project treats the present as a continuum, an appearing and disappearing of things that might leave traces just as much as they might simply evaporate into thin air.

[…] The consideration of value in the work of Pablo Rasgado has to do with the meaning of the form, its appearance as garbage, or the reconfiguration of the insignificant undoing in an artistic form. Emerging from the aesthetic activity confirming the meaning of the form, his sculptures go beyond utilitarian value, at the same time as they are the final vestiges of the surplus, the cadaver of that which was once useful before its evaporation into the air. Nevertheless, in his aesthetic outlook, detritus takes on another meaning. Now, more than the accumulation of garbage –bricks and drywall– it is a sculptural apparition that forms a photographic record of the apparition itself. Its precariousness, left without any way to petrify within the timeless course of natural history, is a simple, melancholic fragment, lacking structure or solidity –only a fleeting image caught between the flows of fading that affects all solids.

Like a fictional paleontologist, Ojo por diente gives meaning to forms of “fossilized” character, as if they were phantasmal traces, but without support, without a physical referent that might empirically verify the course of disintegration of the object or of the body. These sculptural images appear as if emanating from “sedimentary rocks,” as if the scene of ruins within an art gallery that is being remodeled might enable the meaning of these findings. But, as is clear, these forms created from the earthy texture of thin vermillion brick wall also assume the appearance of a solid, the petrification of the natural by means of a footprint of beings from another time, beings who are not even ghosts since there are no records of something that had a cultural past before becoming a vestige. Therefore, the dialectical structure of cultural/natural dissolves.