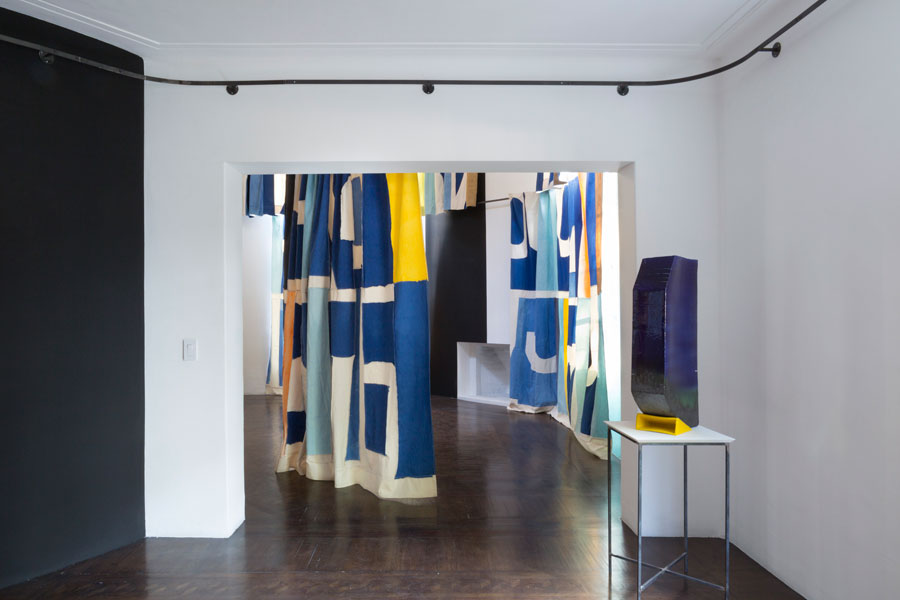 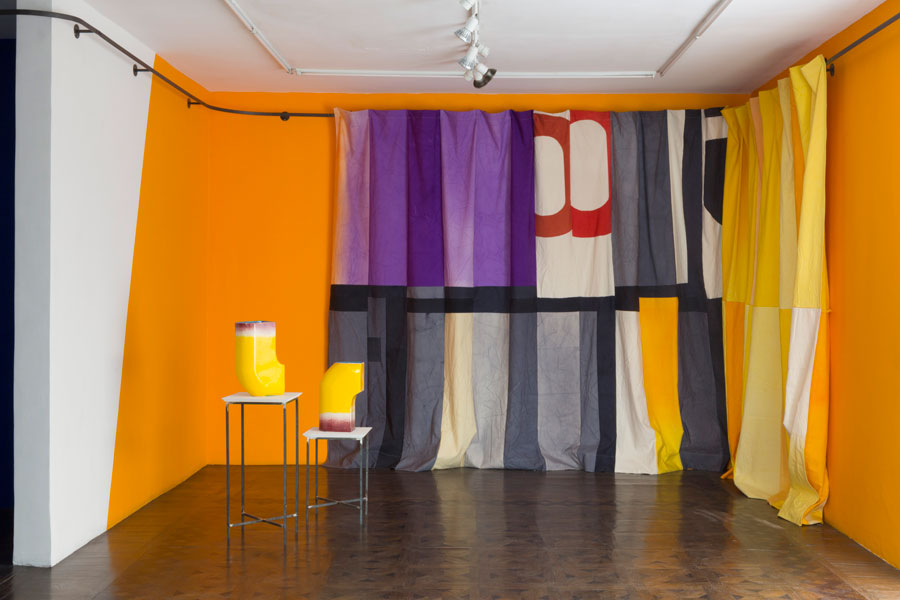 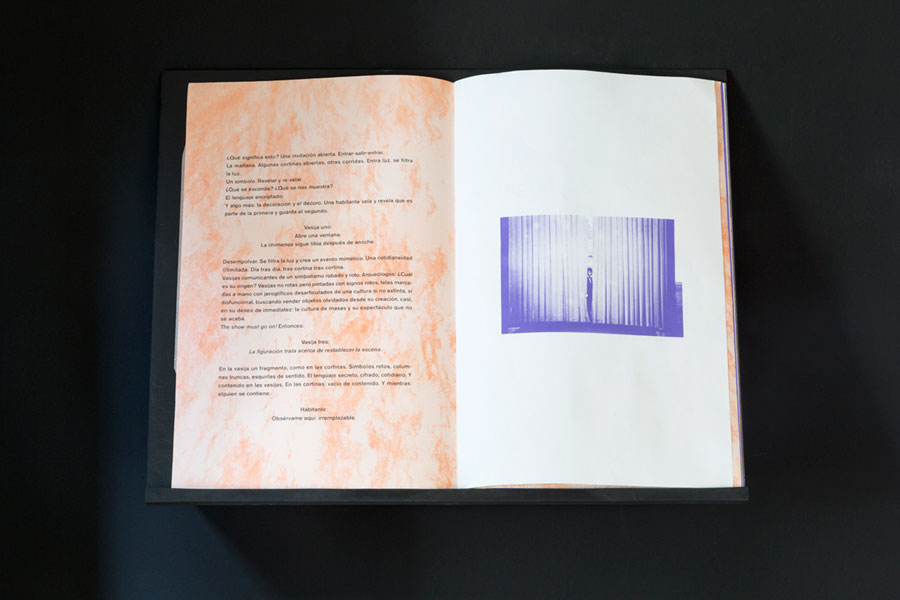 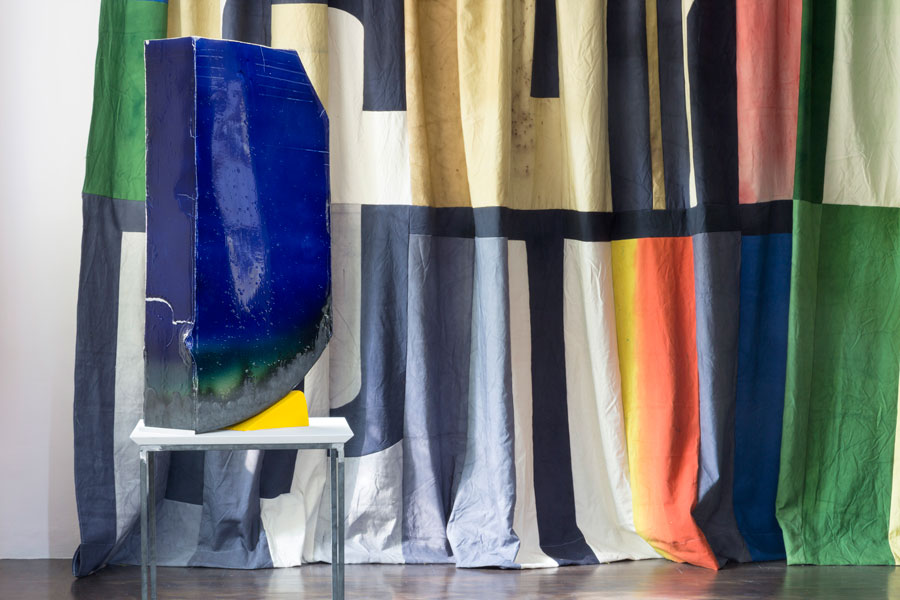 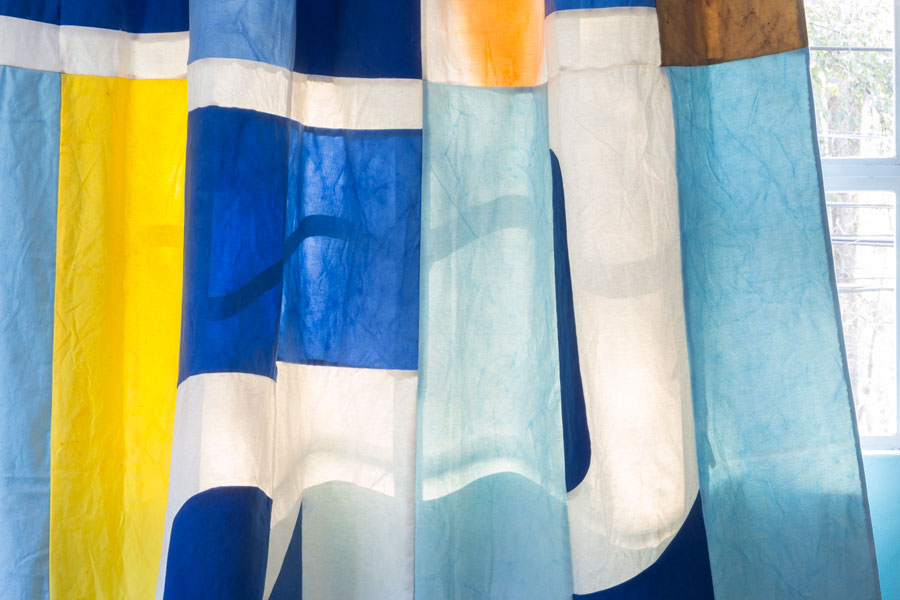 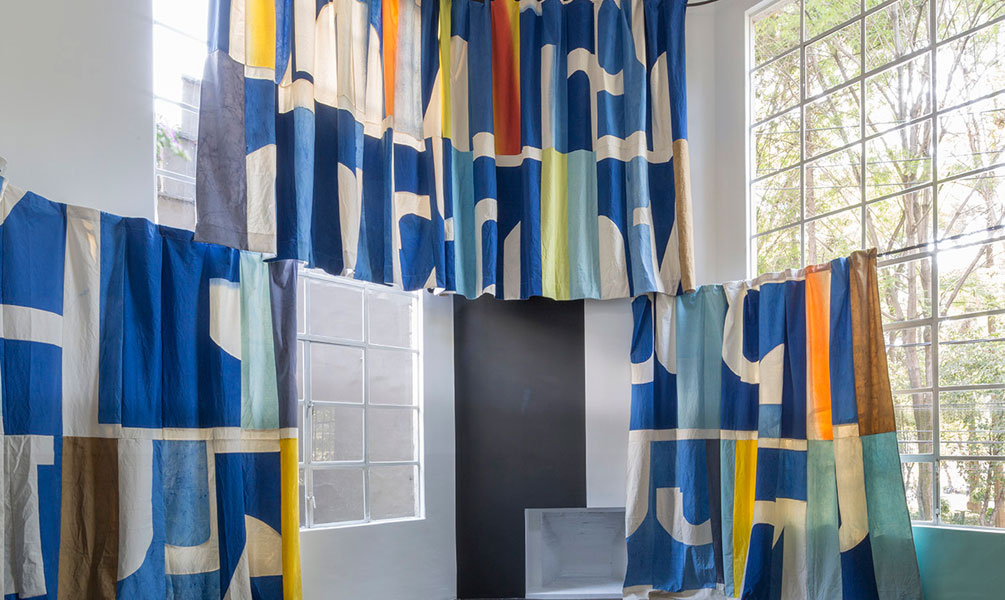 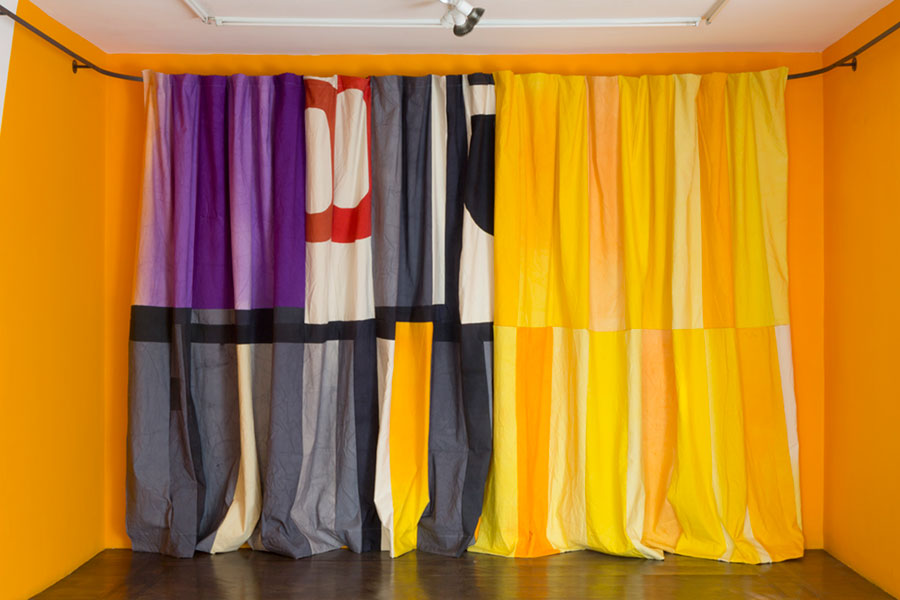 Entrecortinas: abre, jala, corre (Betweencurtains: Open, Draw, Come) is Pia Camil’s first solo exhibition in Mexico. It is a site-specific installation in which the artist elaborates on her series Espectaculares, started in 2012, where she captures aspects of the urban landscape of Mexico City, taking as point of departure abandoned or cancelled billboards which often show fragments of advertising images or the agent’s contact number. Camil appropriates these abstract images and reproduces them in hand-dyed and stitched canvas curtains seeking to decelerate the process of massive cultural production through a handmade craft often related to the feminine.

Composed by three vases and three large curtains, one of them the size of a theater backdrop, the show is, to some extent, performative: based on a script (produced as a limited edition artist book made in collaboration with Gabriela Jauregui and Sofia Broid), at different times of the day, the curtains and vases move places. The script is a staging of a domestic setting inhabited by an imaginary character (a woman), where the dialogues are played out by the vases and curtains. The gallery walls are painted with colors emphasizing the space’s decorative and domestic nature. They also have a formal purpose: when moving through out the exhibition space, visitors can discover different compositions, depending on the curtain’s position within the space, as if experiencing a three-dimensional painting.

The project’s underlying interest is the stylization of failure – in particular the failure of capitalist economies and mass culture. The idea of the billboard as a symbol of this culture, transformed into a household item void of meaning, becomes a playful but critical gesture referring directly to both the billboard and the spectacle. The final result is an imaginary domestic setting consisting of objects made from fragmented and cryptic symbols. The curtains as well as the vases have the function of covering, uncovering, and withholding meaning, contributing to the formation of an undecipherable environment.

Pia Camil (Mexico City, 1980) lives and works in Mexico City. She earned a BA in Fine Arts by the Rhode Island School of Design, and a MA in Fine Arts by The Slade School of Fine Art, London (2008). Her work has been exhibited individually in shows like Espetacular Telón, Galerie Sultana, Paris (2013); Cuadrado Negro, Museo Vasco de Arte Contemporáneo, Vitoria (2013). Among her group shows are Draft Urbanism, Biennial of the Americas, Denver (2013); No A Trio A, La Casa Encendida, Madrid (2013); El Grito, MUSAC, León y Castilla (2011); El Resplandor, Museo Experimental El Eco, Mexico City (2010); Sin techo está pelón, Universidad de Guanajuato (2010); There are false problems, Proyectos Monclova, Monterrey (2009). In 2009 she co-founded the performance band El Resplandor. In 2001 she was granted the European Honors Program, Palazzo Cenci, Rome; and in 2008 she was nominated for The Paul Hamlyn Award, London.