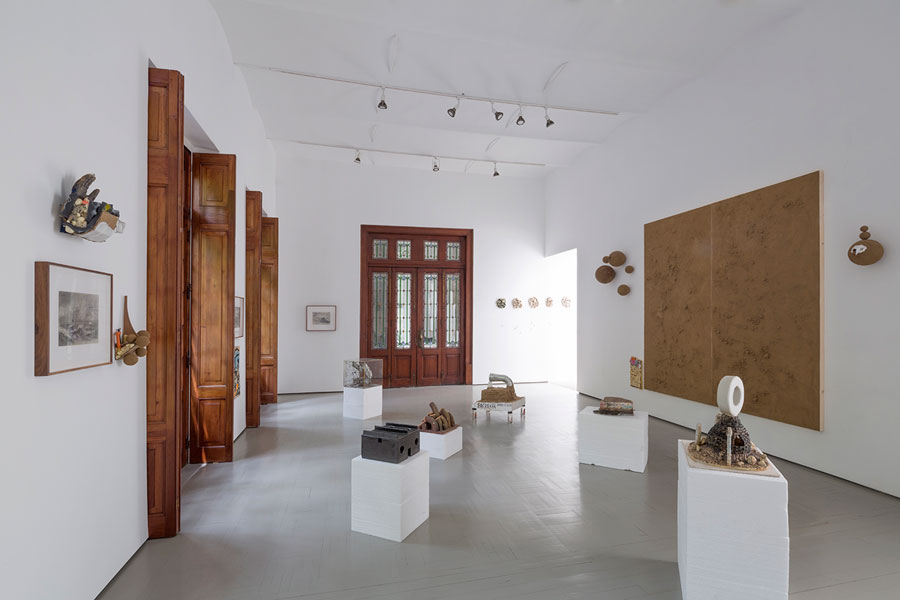 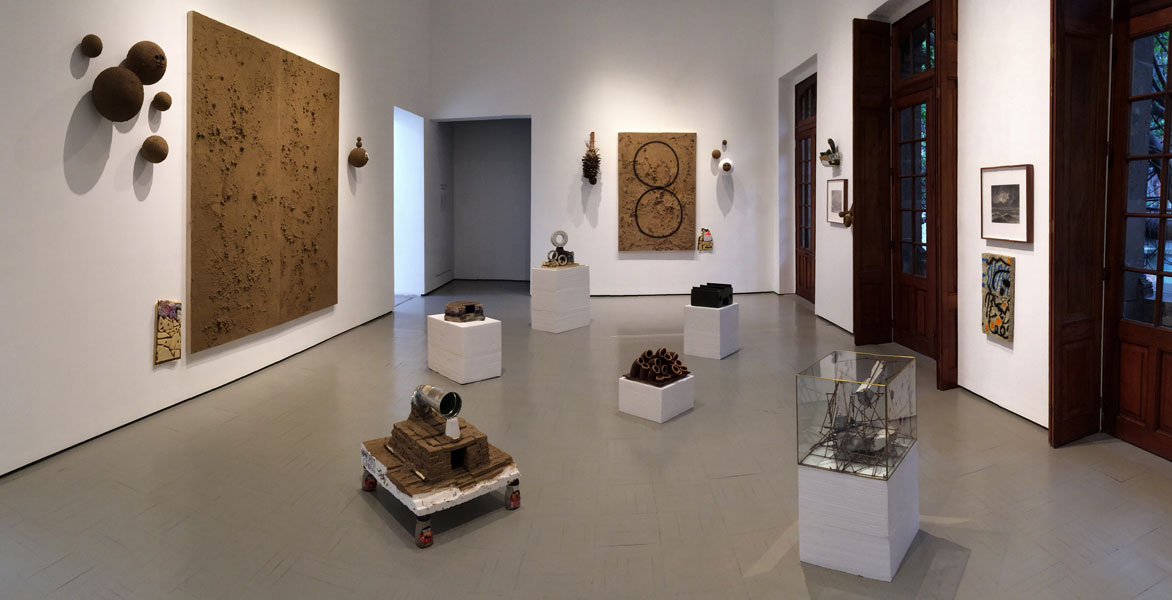 In Reptile Dialectics, his second show at OMR, Theo Michael (Greece, 1978) presents the vestiges of an imagined civilization by setting up dialogues between seemingly incongruous conceptual positions and materials. The paradoxical nature of the works’ sophisticated roughness, as well as the spirit of a futuristic primitivism, makes hard to know whether Michael is an archaeologist or an oracle.

For some time now, Michael put aside the mediums he felt most comfortable with to work from scratch with new materials like ceramics, cardboard, soil, mud and polyurethane foam. The use of soil and sediments for his wall-based paintings serve as an exercise in stratification, revealing Michael’s exploration of time in geological terms. Initially resembling Martian landscapes or geological dioramas of some planet’s strata engineered by NASA, these paintings function both as a physical context that situates the other works on exhibit, and as gestural paintings that reference abstract expressionism.

Situated in an ambiguous space and time, the objects, artifacts and models of primitive buildings and caves are the traces of a cosmogony created by Theo Michael. These fossils of an unknown civilization –that could be either lost or undiscovered, are brimming of mythopoeia, yet they are methodically arranged as if part of an anthropological inquiry. Spherical totemic figures envisage fictional theologies, as emblems of the deification of primitive creatures. Moreover, the amorphous entities depicted in the ceramic and polyurethane sculptures are at the same time religious and comical and accommodate a pendulum to perceive movement, as if they were crude seismographs.

Michael is appealing to the coexistence of the sublime and the ridiculous in his series of helmets and masks displayed on the patio of the gallery. They are made of elementary materials like cardboard, masking tape and a variety of found objects and constitute an ethnographic exercise. The ephemeral and playful mood of these works evokes connotations of a performance that might or might not have happened.

In contrast to his previous exhibition at OMR, his new series of works have been the outcome of a more spontaneous and intuitive process. Avoiding self- censorship and over analyzing, became central for the development of the works. The clash of gods of chaos and gods of geometry enable the exploration and co- existence of ecstasy and rational thinking. It’s Nietzsche’s comprehension of artistic impulses, the recognition of the artist’s skepticism and questioning of free will that provides us with a compass for understanding the show. Reptile Dialectics contains the contradictions of Theo Michael’s thoughts and visions of a sophisticated Neo-Primitivism.