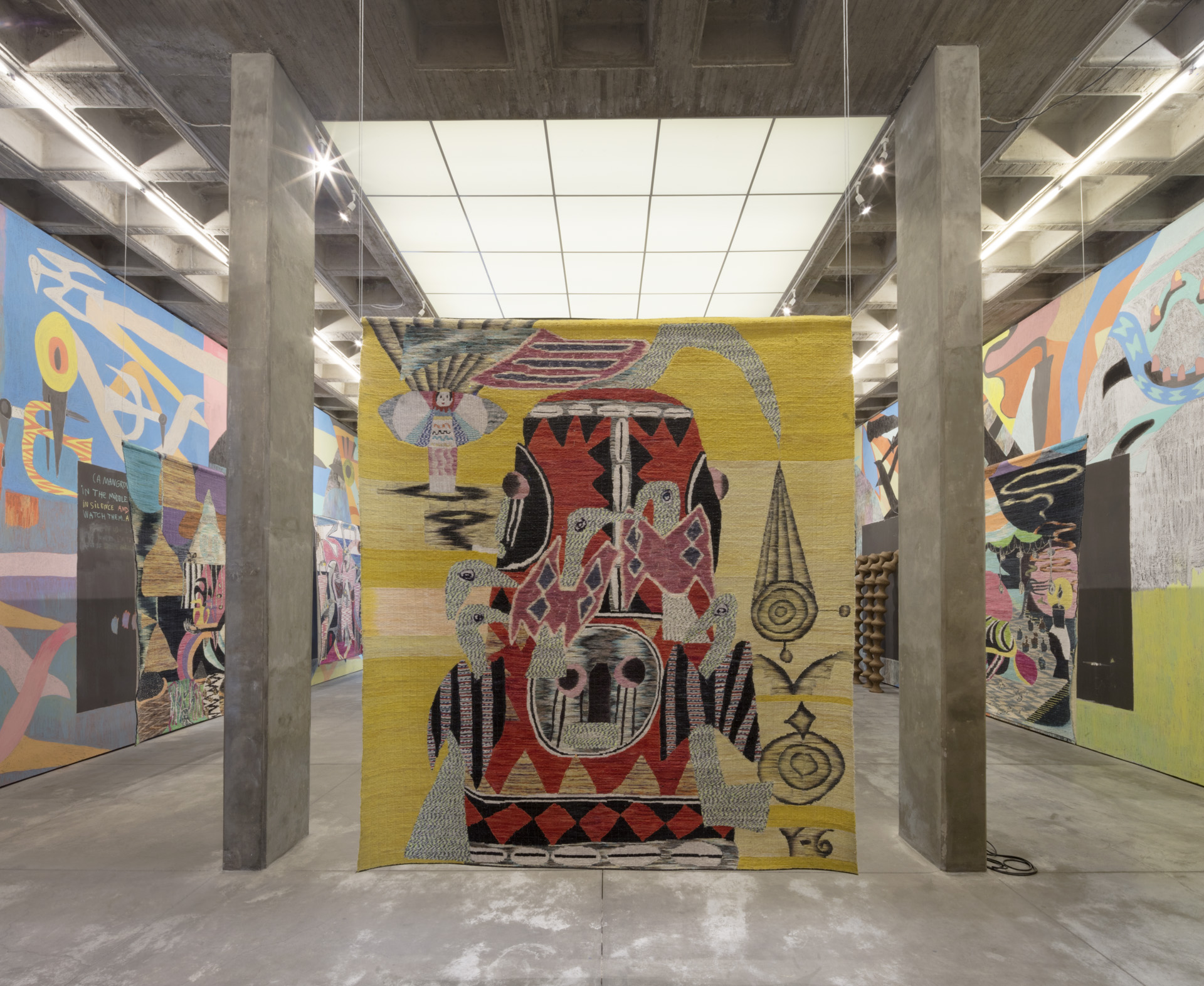 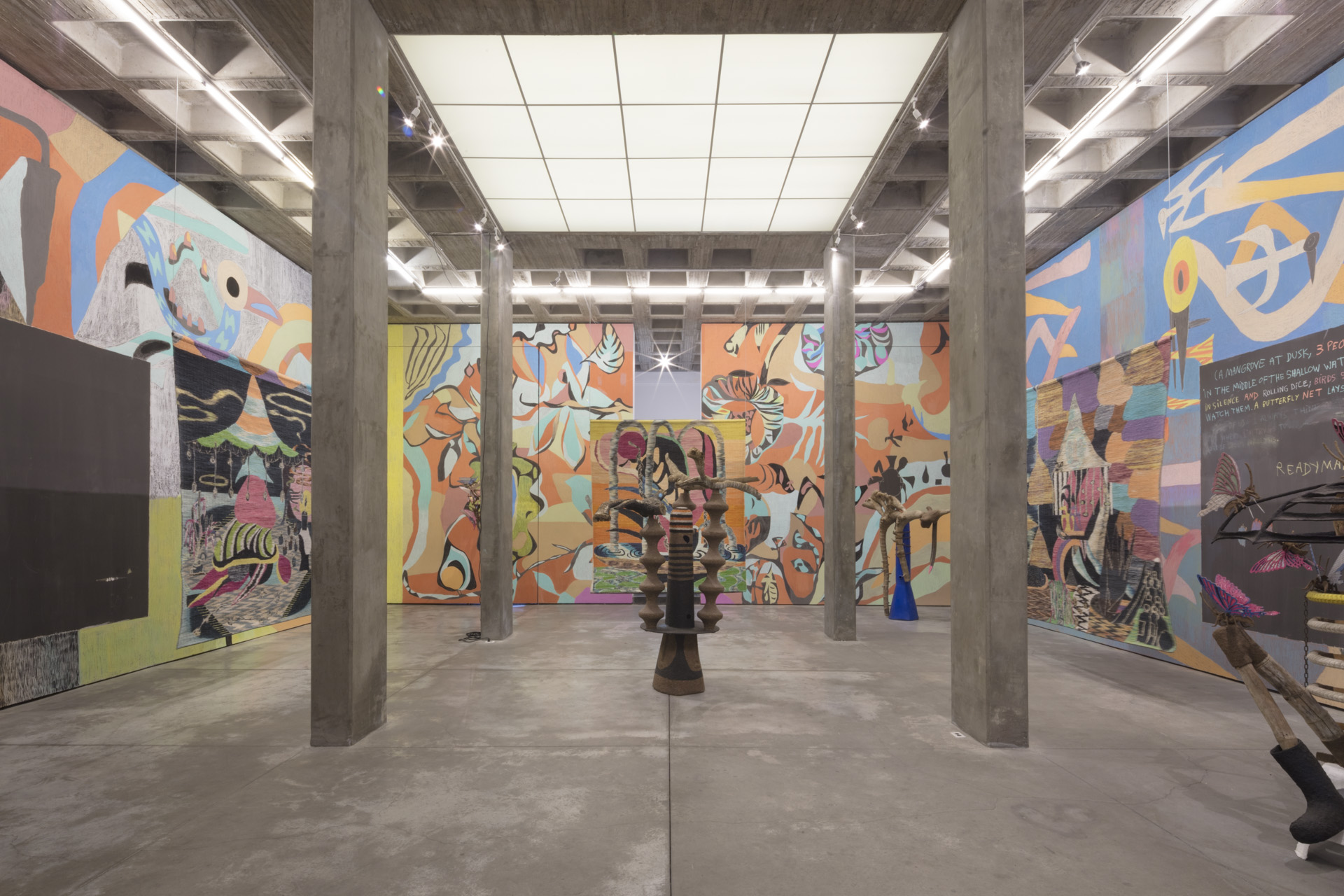 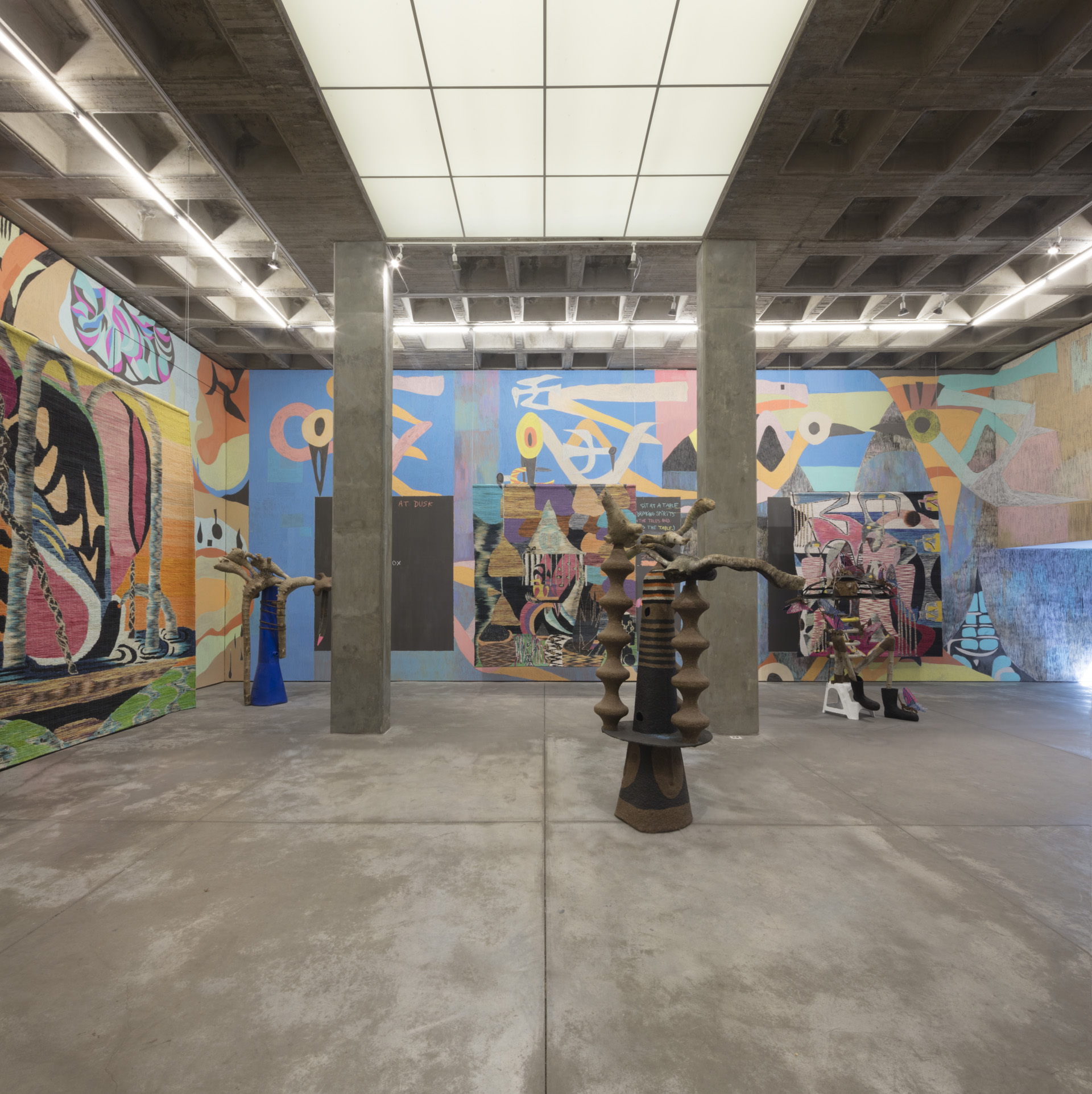 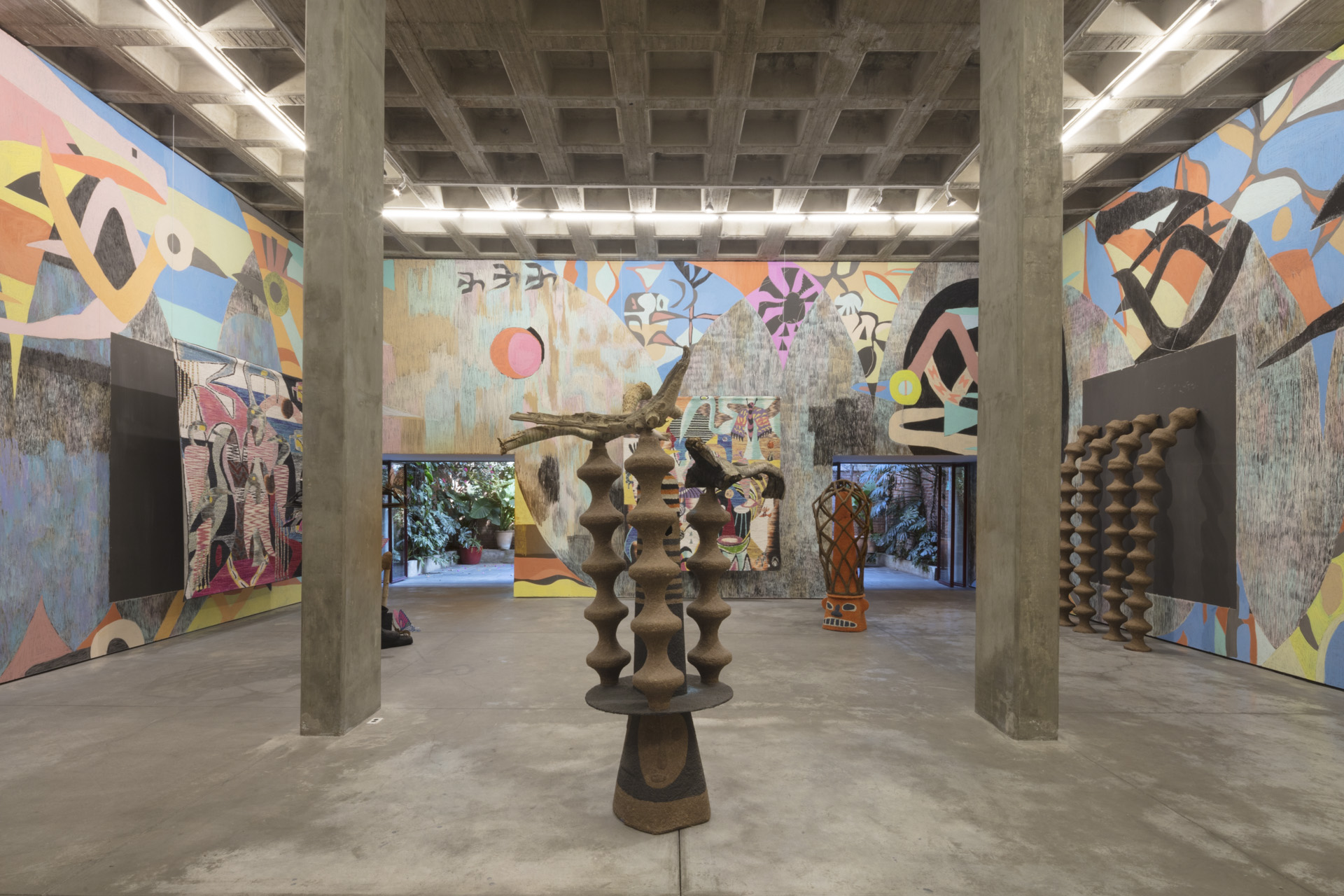 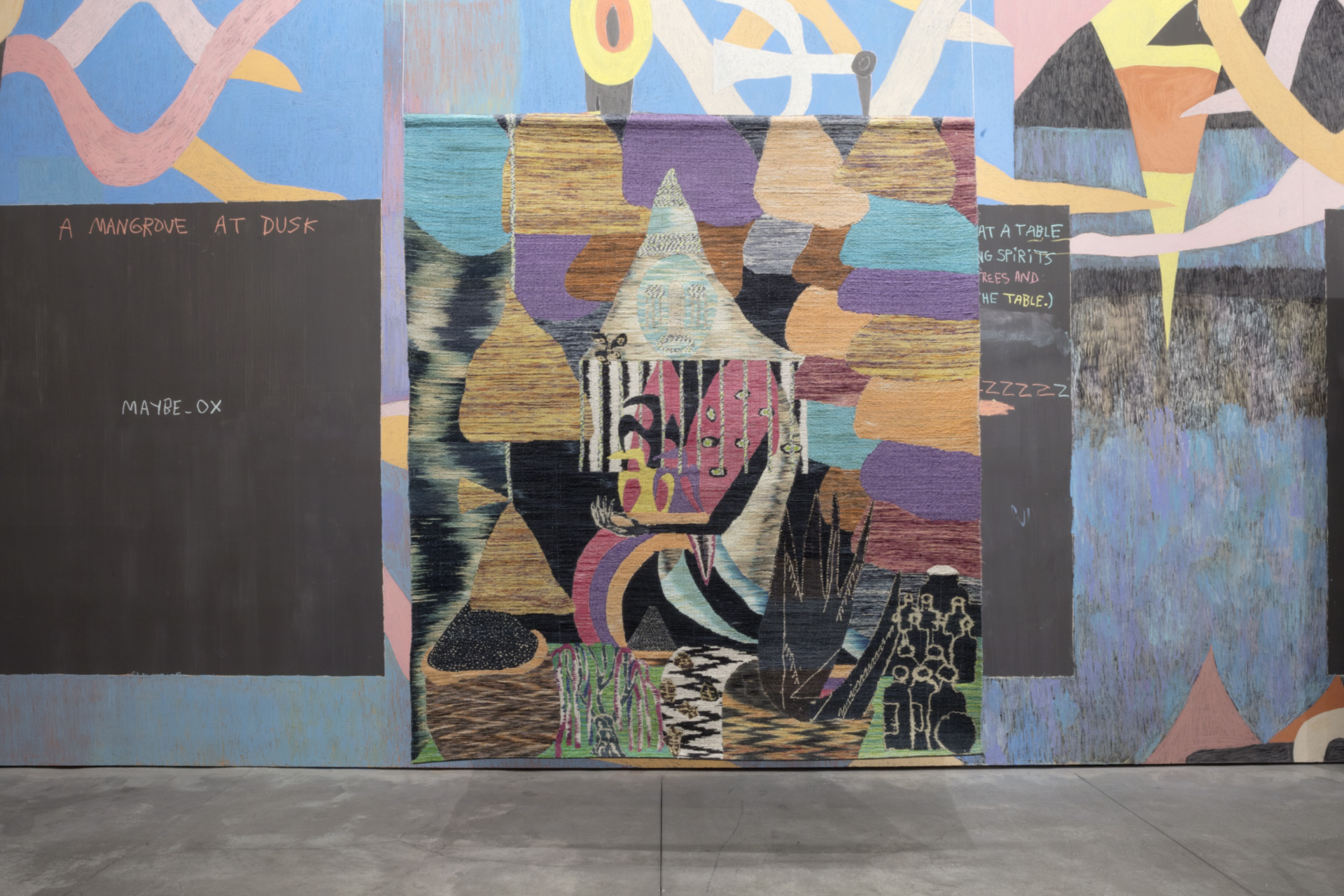 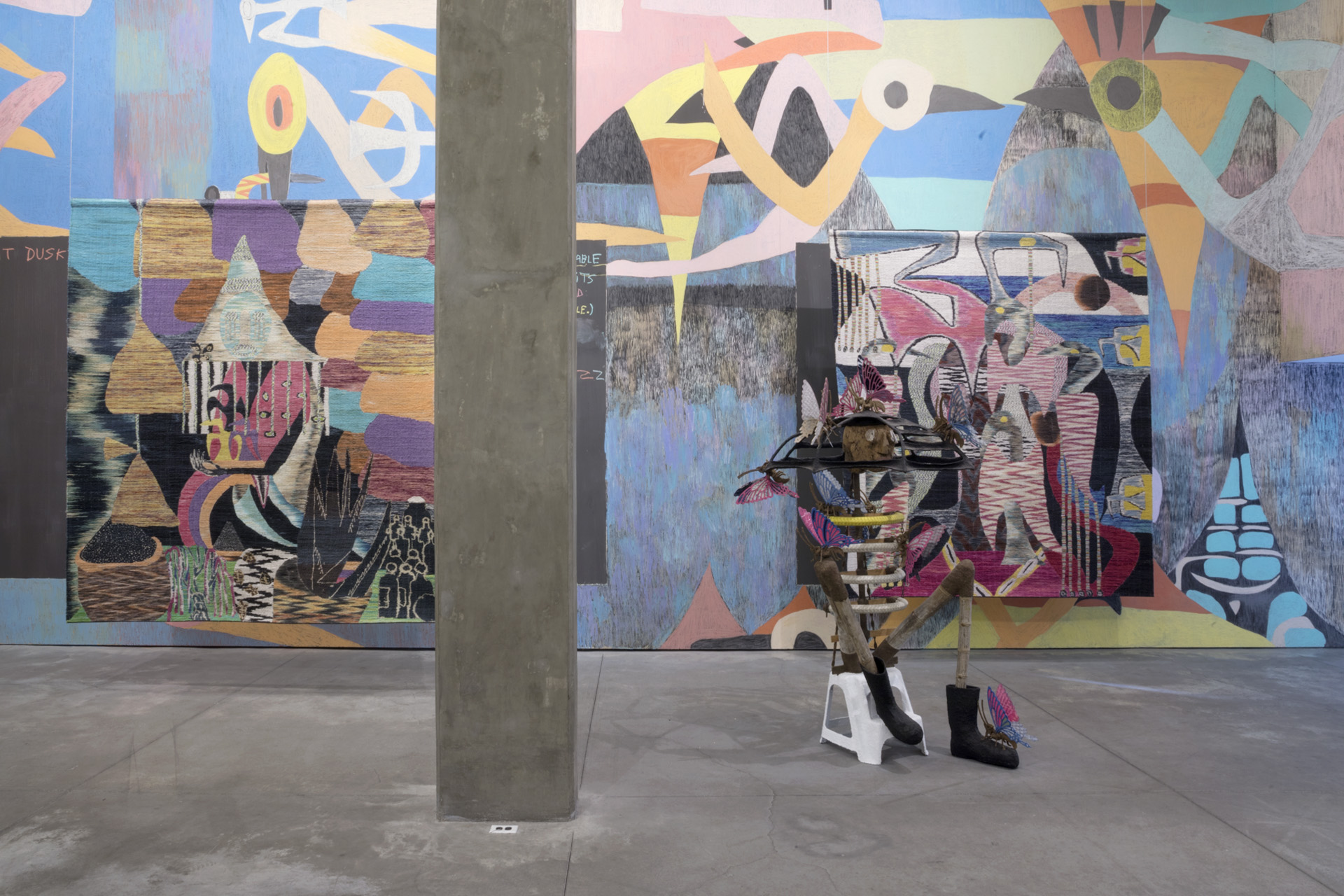 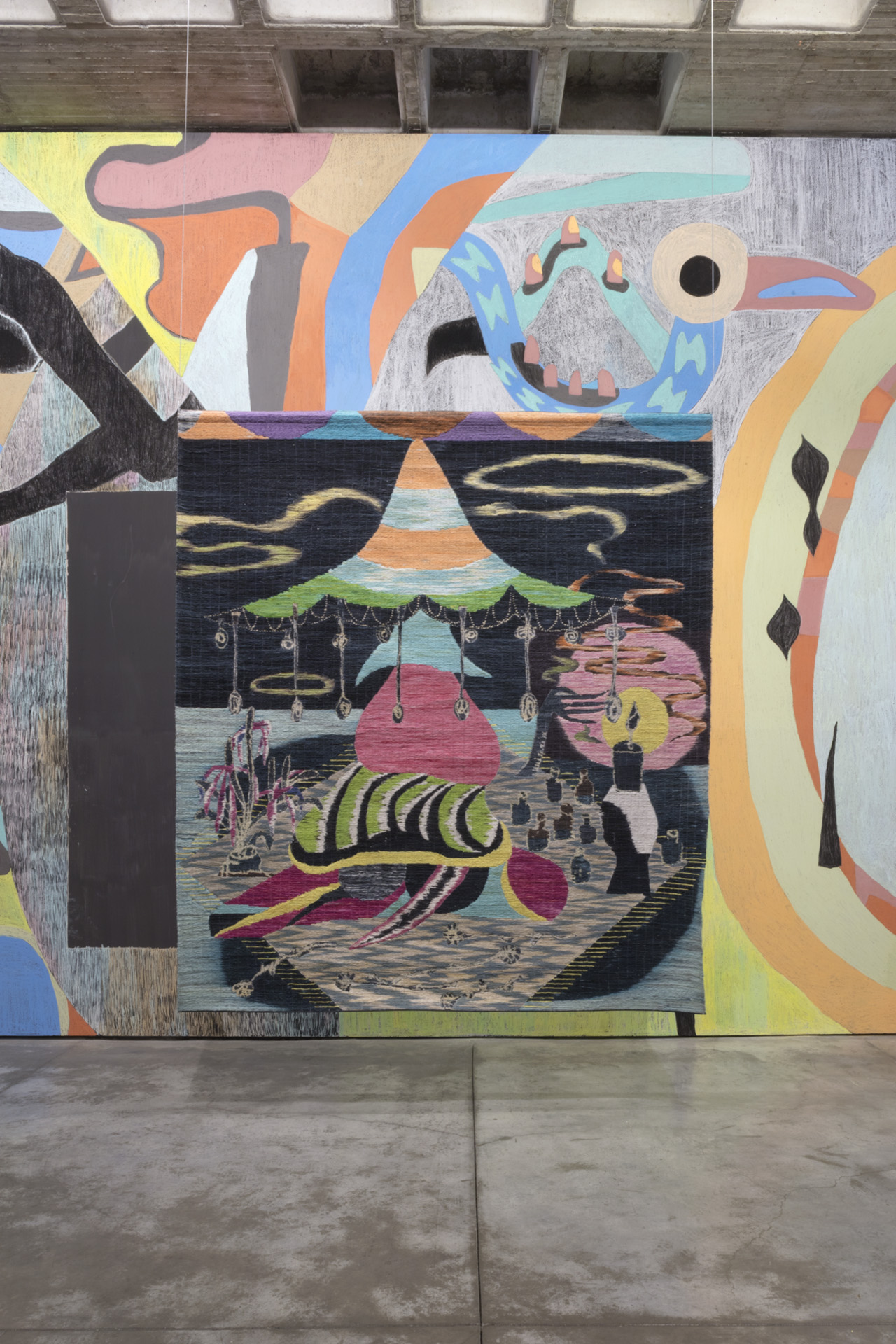 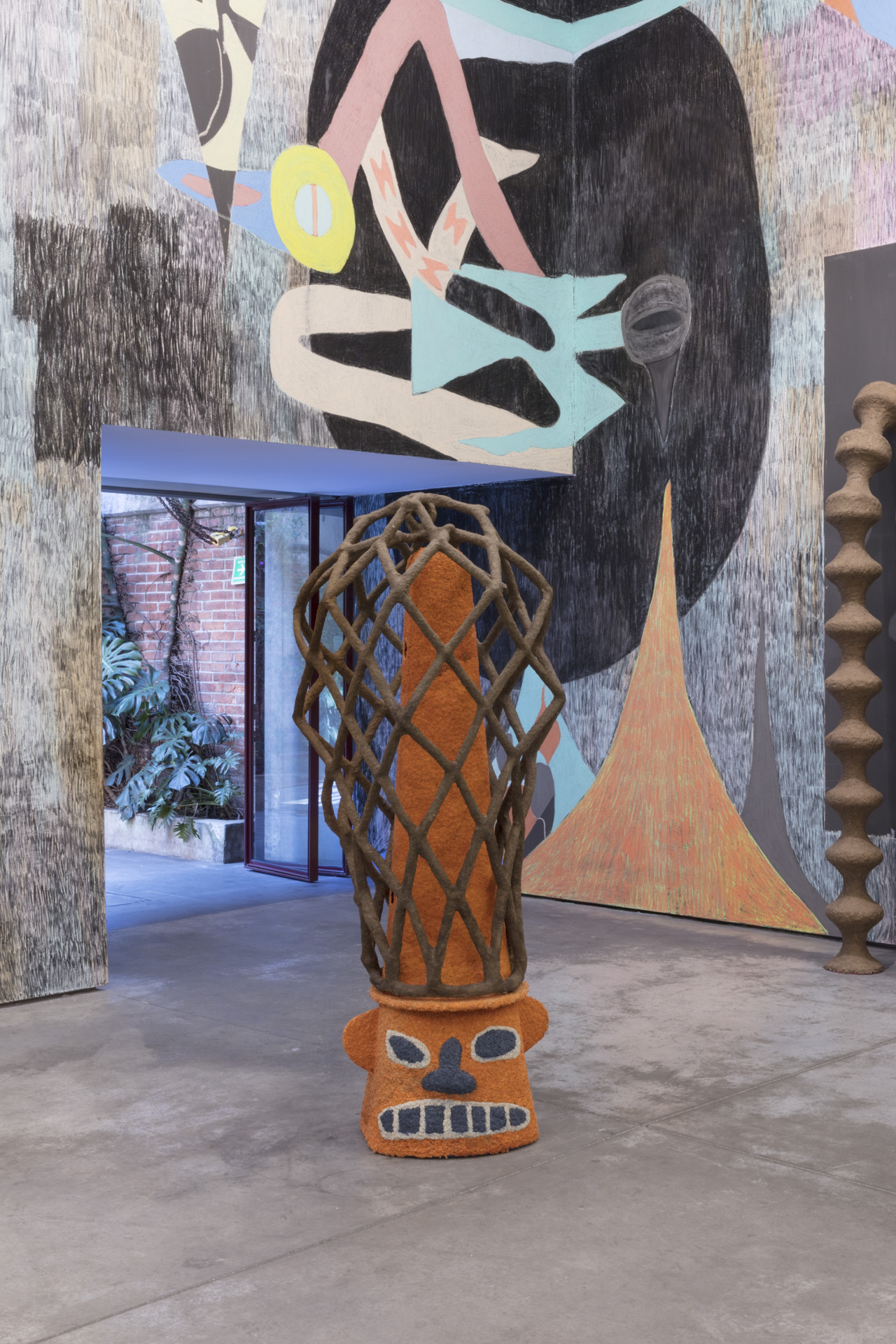 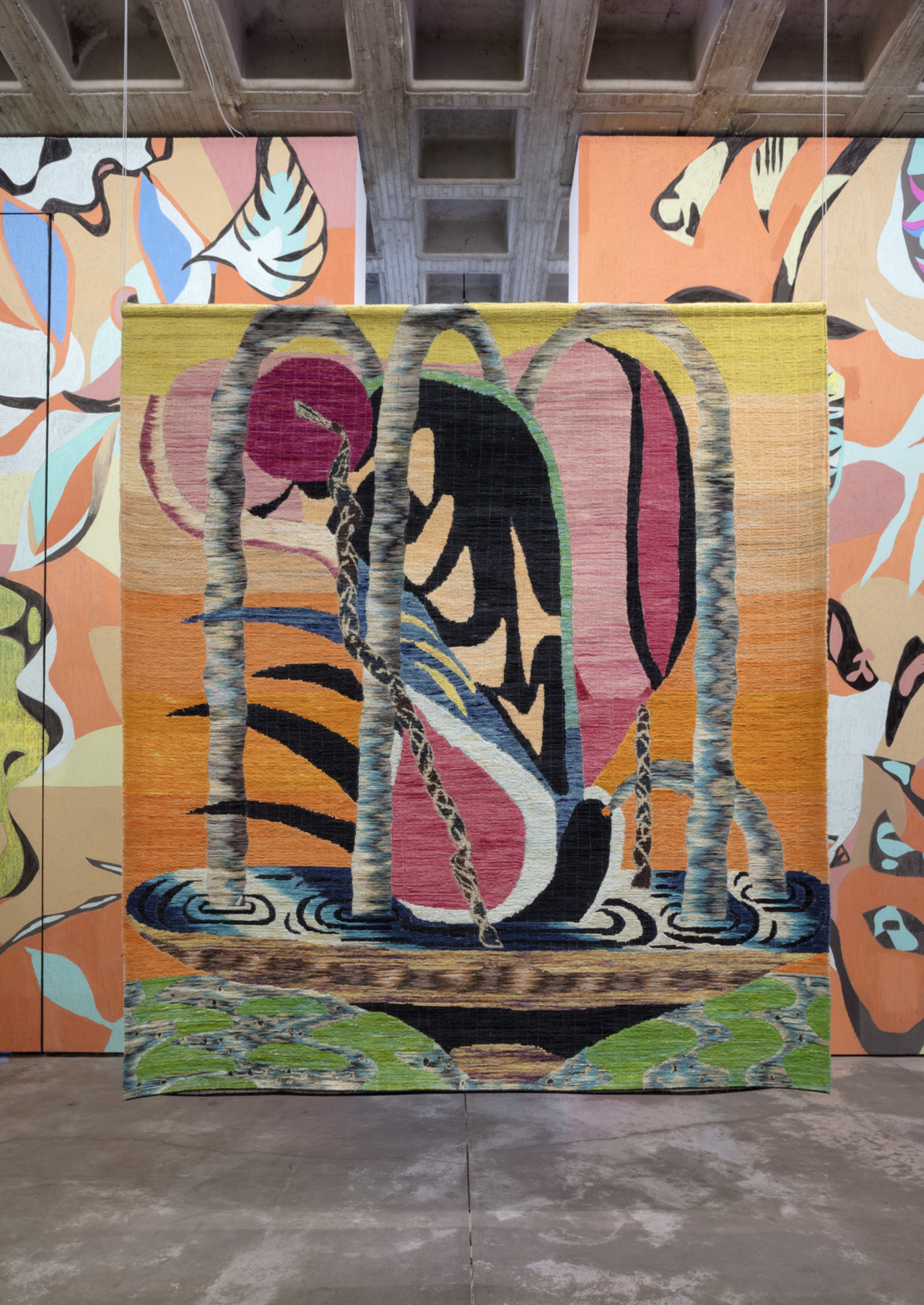 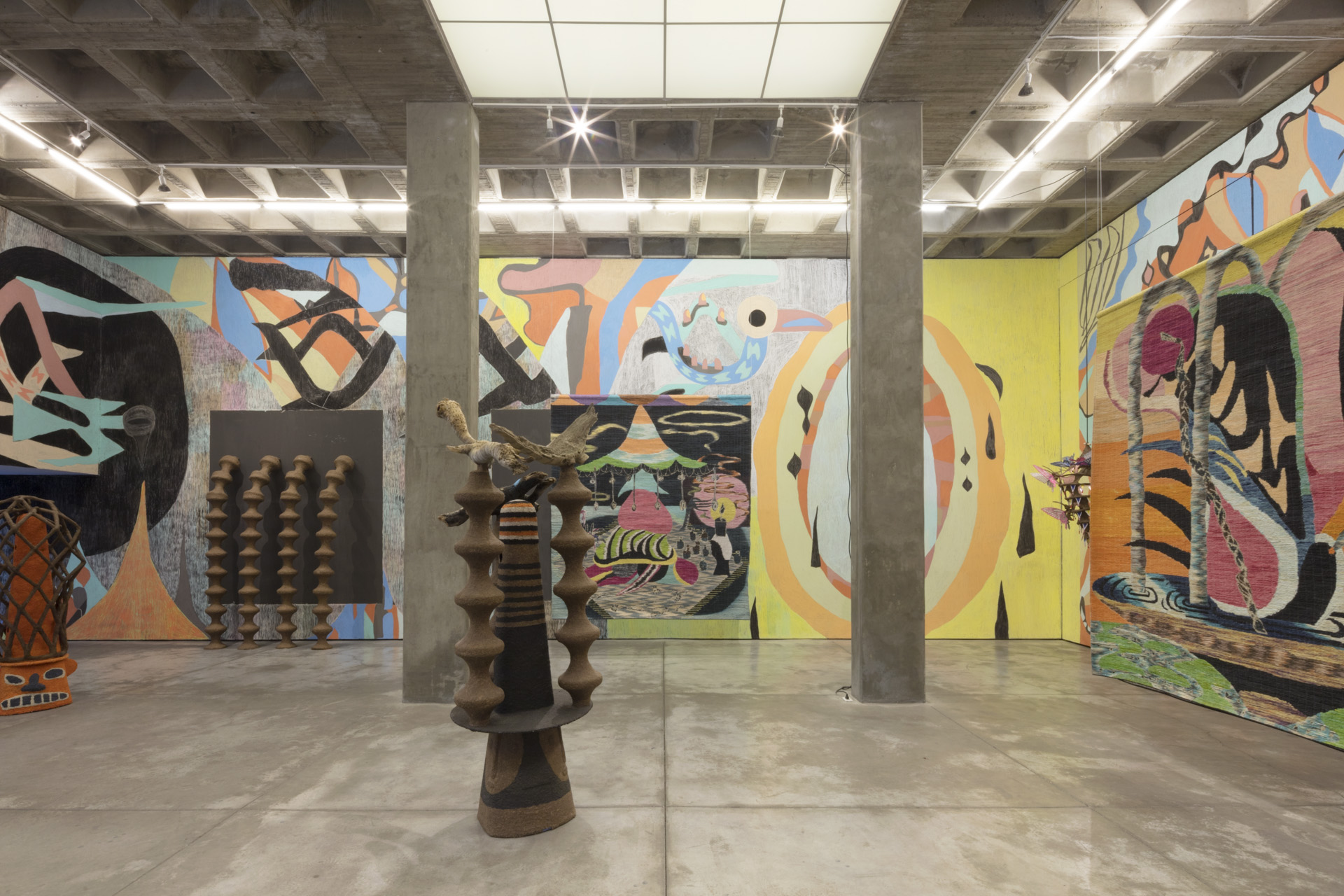 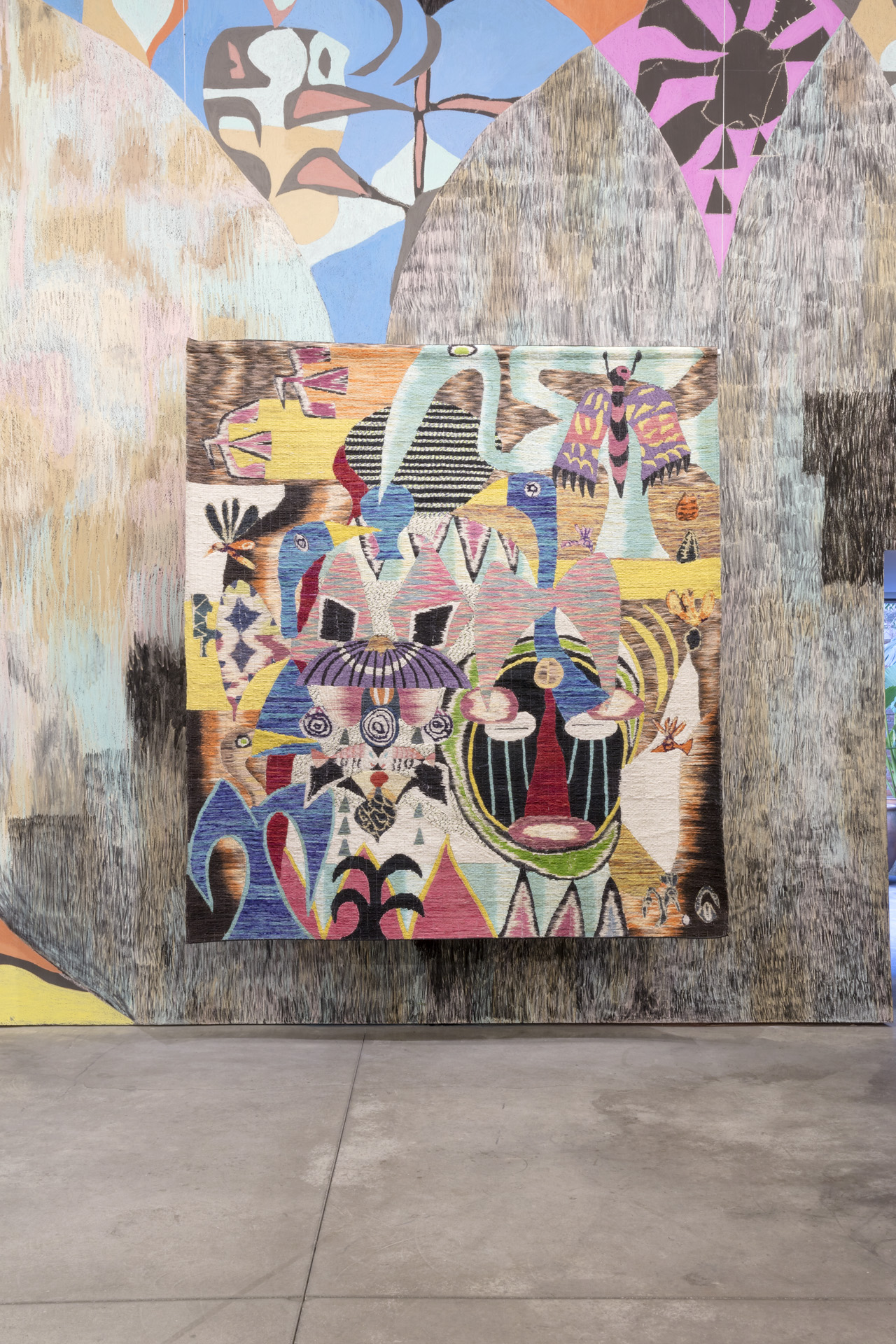 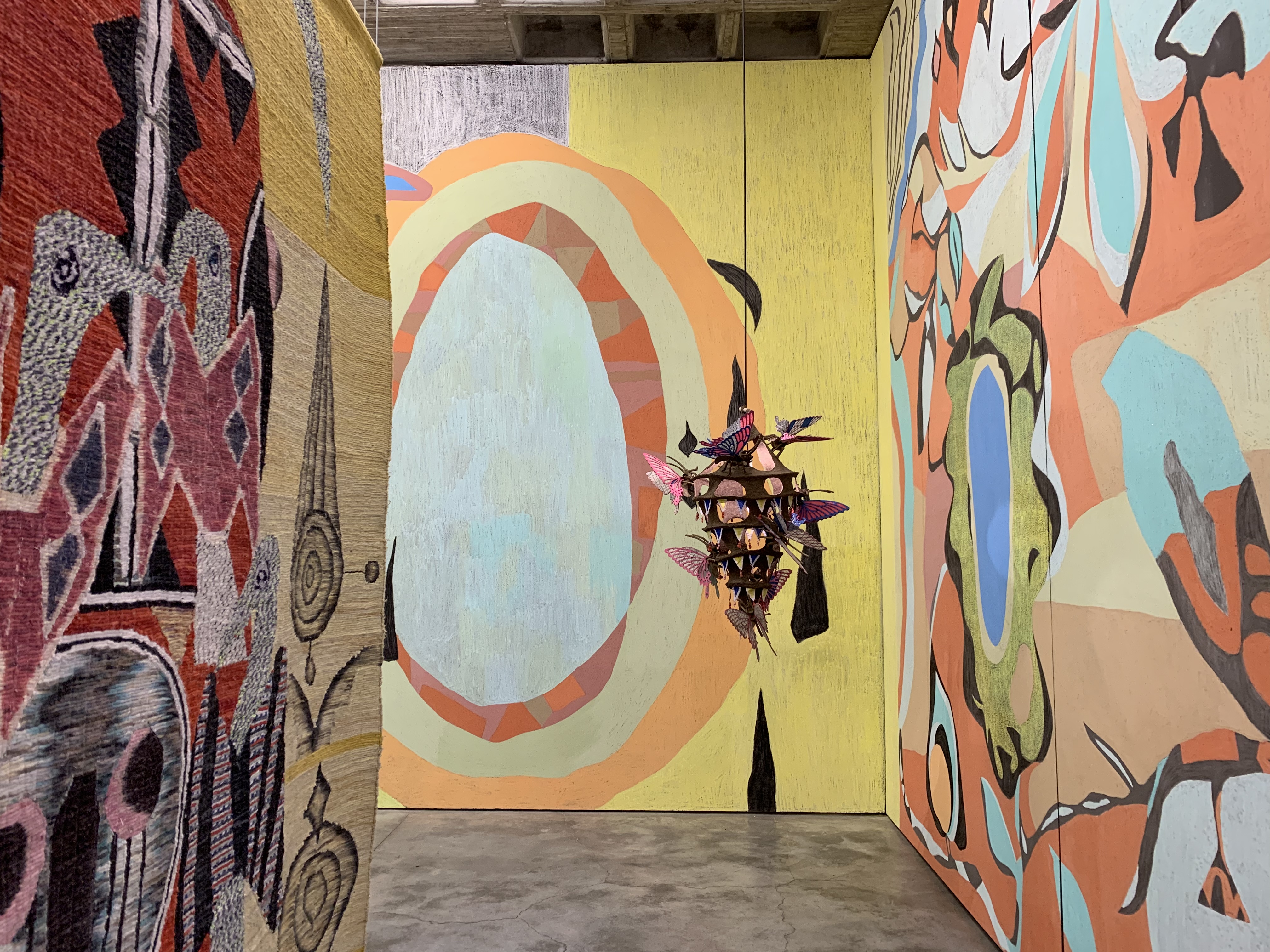 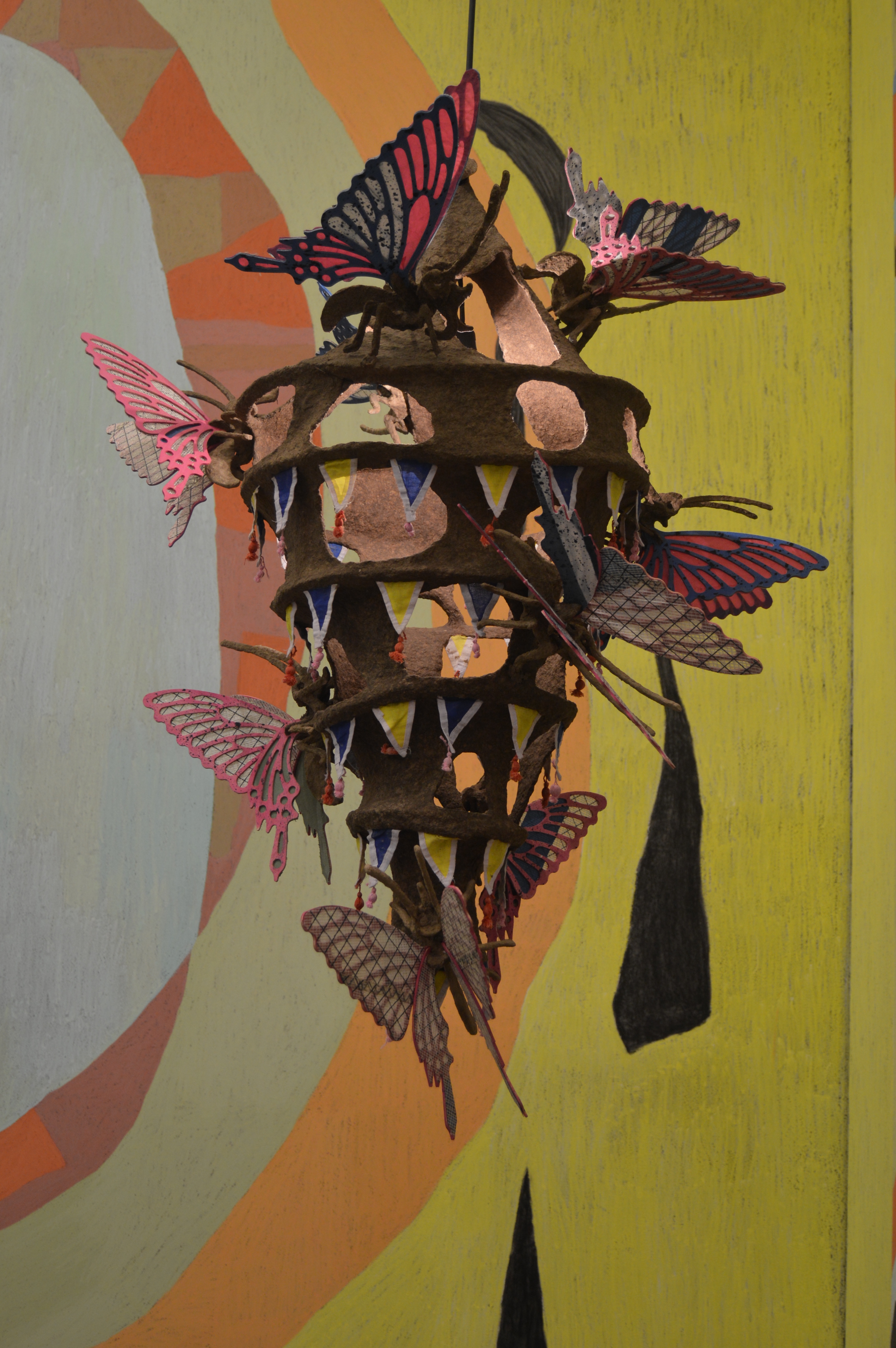 OMR is pleased to present ICE NEWS & FREEWAY FETISHES, a selection of new works by French artist Yann Gerstberger. This marks Gerstberger’s first solo exhibition in OMR, representing his multi-faceted practice while combining a variety of imagery and sources from Surrealism to Nigerian folk art, graffiti to digital image. The works include tapestries made of household materials, sculptural figures, and a site-specific, chalk mural conceived specifically for the occasion. The chalk mural will act as a backdrop for the tapestries, incorporating them into the Brutalist architecture of the gallery space, while the sculptures hold court in the otherworldly environment. In addition to the exhibition, Gerstberger will present his first monograph, Baby Comet Face (Zulu Press © 2019).

During the past decade, Yann Gerstberger (born in Cagnes sur Mer, France, 1983) has created a body of work in which uncontinuous, innocent, tropical and primitive motifs constitute a visual vocabulary mixed between the representational and abstract. Rugged and colorful, the tapestries are a sublime amalgamation of the extensive archive of imagery culled by the artist from many sources, including the Internet, in an effort to engage the material world with its imaginary counterpart. Rendered in hand-dyed mop yarns, the materiality of the image surface becomes soft as a result of the process, echoing the digital nature of the original image – as if blurry from pixilation. Although the works are clearly legible from afar or from a photograph, upon close inspection, the textural qualities of the tapestries interfere with the image’s communicative ability in reality.

Gerstberger’s anthropomorphic sculptures mix multi-source elements and readily available objects from Mexico City’s markets to create personified figures of the same characters working in the markets themselves. Bearing some form of cultural hybridization where traditional techniques and motifs intersect with mass-consumption objects, his work is characterized by a profusion of exuberant colors and shapes. Gerstberger’s style blurs the boundaries by connecting imaginations and worlds, gradually achieving the transformation of one image into another. His visual language is a mostly vernacular one, referencing the comic Fábulas Pánicas, by the Chilean-French artist Alejandro Jodorowsky, and the European fantasy of the tropical, but it also draws from and continues the modernist tradition of his native France.